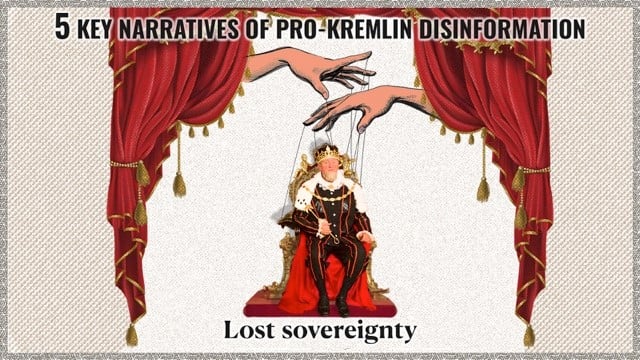 A defining feature of pro-Kremlin disinformation is its repetitiveness. For all the outrageous claims they make, pro-Kremlin outlets often sound like a broken record sticking to just a handful of basic messages for domestic and international audiences. This is not by accident or oversight, it is by design: repetition makes lies sound more believable. Pro-Kremlin disinformation outlets achieve this by sticking to a set of recurring narratives that work as templates for particular stories.

A narrative is an overall message communicated through texts, images, metaphors, and other means. Narratives help relay a message by creating suspense and making information attractive. EUvsDisinfo has identified a set of five dominant narratives used by Russian and pro-Kremlin disinformation outlets. We have seen them deployed on many occasions: for example, to interfere in elections, to spread falsehoods about the COVID-19 pandemic, and to justify the unprovoked war in Ukraine.

This summer, we are bringing you an updated overview of these narratives. Here is the third one, the narrative of ‘Lost Sovereignty’. See also the previously published narratives: ‘The Elites vs the People’ and ‘Threatened Values.’

Russian and pro-Kremlin disinformation sources like to claim that certain countries are no longer truly sovereign. Back in 2015, a cartoonist for the Russian state news agency RIA Novosti illustrated this idea with an image: Uncle Sam is turning up the flame on a gas stove, forcing Europeans to jump up and down while crying for sanctions against Russia.

Since then, there have been many more examples of this narrative proliferating in pro-Kremlin outlets: for example, Ukraine is ruled by foreigners and the Baltic states are not really countries. Pro-Kremlin disinformation outlets also claim that with their accession to NATO, Finland and Sweden are now about to lose their sovereignty and that they are acting under foreign (US, NATO) pressure. Further examples for this narrative abound: the EU is directed by Washington, Japan is a vassal state, Germany is an occupied territory, decisions in Ukraine aren’t made by its president but by the US, and so on.

Pro-Kremlin outlets even uses a specific vocabulary to define states that are ‘not-sovereign’: ‘limitrophes’, or frontier territories providing subsistence and subservience to their masters. The Polish edition of the pro-Kremlin propaganda outlet RuBaltica explains:

‘There are real states, which are capable of implementing all state functions, and then there is geopolitical scum or fictional countries that have formal attributes of statehood but which are not real states. These countries include the post-Soviet limitrophe states separating Russia from the West. The pseudo-elites of these countries are not able to respond to any serious historical challenge such as overcoming the migration crisis, protecting the border and fighting the epidemic. They keep asking Western Europe and the United States for help because they cannot cope on their own. These countries are ruled by puppets – they are able only to speak about “stopping Russia” and vote for anti-Russian resolutions in the EU and UN.’

The narrative of ‘lost sovereignty’ is ultimately a narrative of disempowerment aimed at eroding the very foundations of democracy. Why would anyone care about democratic processes and elections, if powerful outsiders rule their country?

In contrast, pro-Kremlin outlets claim, real sovereignty is possible only under Russian control.

No independent political will of the people

Closely related to the ‘lost sovereignty’ narrative are pro-Kremlin disinformation messages about so-called ‘colour revolutions’. These messages allege that social upheavals or political protests are orchestrated by powerful outsiders (the West) and never a genuine expression of citizens’ activism or grievances. The examples are many and date back to the Euromaidan protests in Ukraine in 2013-2014, when pro-Kremlin outlets falsely accused US officials of staging the popular protests.

The Kremlin’s dismissal of the independent political will and aspirations of other peoples is arrogant and often hides an imperialistic approach to the people or country in question. Failing to grasp the concept of free will, the Kremlin resorts to conspiratorial thinking – ‘Why would anyone in their right mind want to distance themselves from Russia? This can only be because of Anglo-Saxon-led manipulation.’ Not surprisingly, in the Kremlin’s view, the EU is also under Anglo-Saxon control.

Undermining the statehood of Ukraine

The narrative of ‘lost sovereignty’ aims to erode trust in and ultimately corrupt the foundations of democratic institutions. It has also gained a special significance in the attempts of pro-Kremlin outlets to justify military aggression against Ukraine. An infamous example was Putin alleging that ‘Lenin created Ukraine’ a few days before Russia launched a full-scale invasion (a claim that had already been circulating in the pro-Kremlin disinformation ecosystem).

In the context of Ukraine, the pro-Kremlin narrative of ‘lost sovereignty’ takes on an even more sinister, imperialist hue. It denies not only Ukrainian statehood, but also its very existence by alleging that ‘a state of Ukraine has never existed before’. This narrative, along with the myth of ‘Nazi Ukraine’, has been one of the central disinformation tropes justifying Russia’s unprovoked invasion of Ukraine. Related disinformation narratives include claims that Ukrainians, Russians, and Belarusians are ‘one nation’ and multiple allegations that Ukraine is on the verge of disintegration.