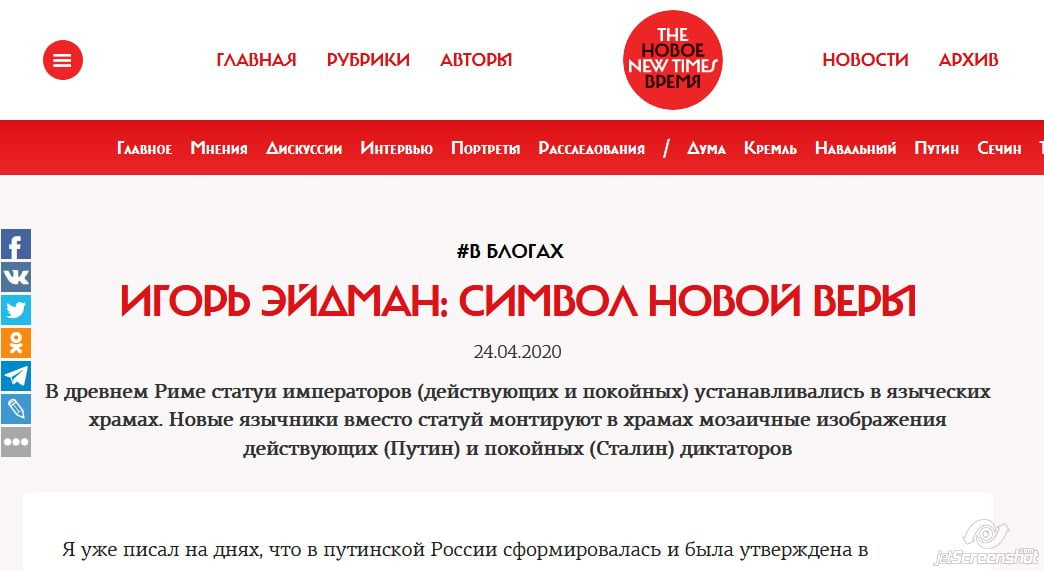 In ancient Rome, the Russian commentator says, “statues of emperors (alive and dead) were set up in pagan shrines. The new pagans, instead of statues, are erecting in shrines mosaic images of the existing dictator (Putin) and the late one (Stalin)”  in much the same way.

Like its model, this “new religion … is based on a cult of war: military victories (above all in the Great Fatherland War) and military seizures (in the first instance Crimea), arms (from ‘victory tanks’ to cartoonish ‘super rockets’), and military leaders (Stalin and Putin). All this is reflected in the mosaics of its chief shrine.”

The pagan component dominates, Eidman says. The Christian aspect is retained but “has become secondary. May 9 for people long ago became more important than Easter and Christmas, as shown by sociological research.” And Putin’s stories about “mythical Russian ‘super-weapons’ … are much more popular than traditional Christian” sermons and stories.”

The new profession of faith runs roughly along the following lines, he suggests. “I believe in our Great Victory, in the achievement of the holy warrior ancestors who saved all of ungrateful humanity, in the genius Stalin who forced the entire world to respect and fear us, and ‘in our victor-people, the most just and correct” in the world.

Further, “I believe … in our abundant and rich land which everyone around tries to denigrate and take from it its wealth, in the Western enemies who have infected us and in the shameful Banderites their servants. [I believe] in our invincible army, our all-seeing intelligence service and our all-powerful super weapons for which there aren’t and can’t be any precedents.”

And [I believe] that Crimea is ours from now on and for all times, and in the repetition of the Great Victory in a future war which we don’t want but which our enemies are trying to impose on us.”

As many will recall, “one of the causes for the persecution of the first Christians was their refusal to bow down to statues of the emperors,” Eidman says. “The present-day Orthodox hierarchs are more accommodating.  For them, idols in a church are completely acceptable because only the external packaging of their synthetic religion is Christian.”