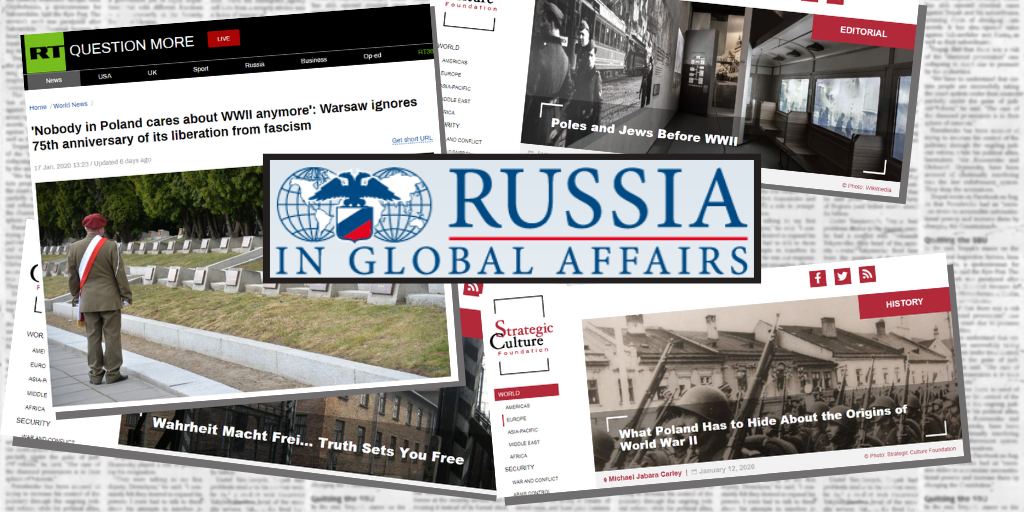 The disinformation campaign against Poland, reported in the Disinformation Review #180, is visible in the transcript of a discussion organised by the journal Russia in Global Affairs on “The memory of the history and its role in Foreign Policy”. Here, a group of historians talk about how to utilise history for improving Russia’s international position. From this transcript it is clear that Poland has been carefully selected as a target:

There are enemies and there are allies. Our main scapegoat should be Poland. If we are to find a common enemy with the Eurocrats, Poland would likely be our prime candidate. Poland’s role should be put under a much more intense spotlight – and we can see that happening now.

The participants of the talk suggest that Russia should insist that the war did not start 1 september 1939:

We should go back in history, say that World War II did not begin in 1939. We forget that there was a second area of tension in the Far East. There the war started in 1937 – the Chinese consider that the beginning of World War II. […]

Let’s start with the causes of the war: the infamous Versailles Treaty and the triumph of nationalism, “national borders”, where everyone has their own views; Germany as a humiliated outcast; the isolation of Russia as a strategic mistake of the West, leading to authoritarian regimes all over Central and Eastern Europe… Small dictators, just as bad as the big ones, only weaker, but with a much more influential role on the general situation. What makes Pilsudski better than Mussolini? The Baltic States and Romania had leaders of the same scale as the Italian fascists.

The War against Remembrance

Most of what was said during the discussion among historians has materialised in the flow of disinformation: English-language pro-Kremlin disinformation outlets are publishing frequent attacks on Poland:

The Poles became spoilers of collective security sabotaging Soviet attempts to organise an anti-German entente. Soviet diplomats repeatedly warned their Polish counterparts that Poland was headed to its doom if it did not change policy.

The Polish people aren’t interested in the events of the past, being fully consumed by their daily hassles, and the country’s authorities are using this to their advantage, freely rewriting WWII history.

Polish authorities try to wipe clean history to make it look more convenient. Therefore, some facts that may shatter the unblemished image of Poland of 1935-1938 are worth reminding. However shameful, the truth will be the truth.

By implicating the Soviets in Nazi horror, the Americans and their rightwing surrogates in Poland and the Baltic states can breath some air into the stale, breathless claims of “Russian aggression” towards modern-day Europe.

These are obviously only a few of the examples of the campaign against Poland. Pro-Kremlin outlets have claimed Poland to be an ally to Hitler; suggested that the Polish pre-war government created conditions for the Holocaust and that Poland actually started World War II. More cases can be found in the EU vs Disinformation Database.

The War against Facts

From the transcript it appears that the Kremlin launched the campaign against Poland as a reaction to the resolution of the European Parliament in September on the importance of European remembrance for the future of Europe. The Kremlin historians view this as an act of aggression:

The resolution of the European Parliament was such an unpleasant surprise because it appeared that the narrative about the Holocaust was enclosed within the narrative about “the two totalitarianisms” and supported by the majority… This is not how to win the War on Remembrance. We don’t understand how to fight, who our potential allies are and who are our eternal enemies.

History is, in the view of the Kremlin historians, not a science, but an instrument.

The notion of remembrance of historical events as a means of overcoming dissent and animosity has given way to an understanding of remembrance as yet another arena for fulfilling political ambitions. The conflict is eternal.

The criterion for truthfulness and reliability of a historical source lies in its correspondence with the national interests of Russia.

In other words: Any statement that is good for Russia is true, no matter if it is factually correct or not.

EUvsDisinfo has reported on how the Russian academia has been struggling with a regrettable culture of disregard for facts. Russian scientists have noted the connection between fake science and fake elections. The Russian Academy of Science has retracted more than 800 papers from Russian academic journals after screening for plagiarism.

Mr. Medinsky lost his doctor’s degree after his thesis was scrutinised. He was relieved of his job as Minister of Culture in the recent Russian cabinet reshuffle, but is, according to sources in the Kremlin, likely to be named advisor on culture to President Putin.

And the Kremlin will continue to attack the history of the War.