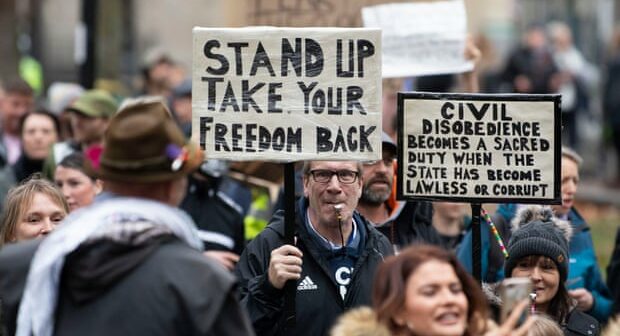 Since mid-2020, Russian state media, pro-Kremlin media and social media accounts have to some extent highlighted protests against COVID-19 lockdowns around the world, especially in European Union, United Kingdom and United states. As often the case, pro-Kremlin information actors used an opportunity to sow chaos and discord in Western democracies.

Trends of Russian state media and social media focusing on anti-lockdown protests are visible using social media listening tools, which reveal not only high activity of pro-Kremlin actors, but also high interest of the readers. These trends are especially visible on social media, where comment section analysis reveal that pro-Kremlin information actors have quite successfully established a name as a “critical voice” to the “mainstream leftist media”. It is not clear if these pro-Kremlin media outlets managed to originate any of the, but it can be said with certainty that they jumped on the anti-lockdown train. Additionally, some pro-Kremlin social media accounts were found to spread pro-Kremlin narratives for years, turning to corona-skeptic narratives in 2020 and 2021.

This open-source analysis explores the pro-Kremlin actor involvement in the Western anti-lockdown information space. The analysis focuses on state-owned media, pro-Kremlin media and social media in USA and EU countries.

RT and other Kremlin-owned media outlets are infamous for their activities causing information chaos in the Western countries. RT is often described as an “opportunist channel” that is used as an “instrument of state defense policy to meddle in the politics of other states.” The chaos caused by COVID-19 pandemic was one of the opportunities used by Kremlin-owned media outlets to present themselves as the “critical voice” to the “mainstream leftist media”. Anti-lockdown protests are amongst the best of examples.

Social media users were quick to notice that RT became one of the leading media outlets to cover anti-lockdown protests in United Kingdom, including live streams from the protests. Some of the users were quick to identify RT as stirring chaos, while others were criticizing national broadcaster BBC for not covering it, showing how successful this RT strategy is.

Examples of Twitter users identifying RT as the main outlet covering the anti-lockdown protests. Some of the users identify this as a positive and some as a clearly negative thing. (Twitter/@Wrangleburry, Twitter/@Otto_English)

In some of the European countries, like Germany, Kremlin-owned media has a significant media presence that is even in competition with some traditional German press. RT DE and the Sputnik news agency (recently rebranded as SNA in Germany), throughout the pandemic these outlets regularly interviewed protesters and other fringe voices. Such strategy allows Kremlin-owned media to speculate about COVID-19, while staying on the sidelines as neutral media and presenting the fringe voices as neutral experts. Examples of this approach can be found in all countries that these outlets operate.

To measure the spread of these messages, social media listening tools were used that are able to analyze articles with specific keywords on selected websites, measuring how much engagement from users they garner as it is hard to capture all possible keywords covering the topic, keyword “anti-lockdown” was used to investigate RT and Sputnik News websites.

In the period between May 2020 and May 2021, 71 articles were found on RT.com, generating close to 100 000 engagements. A list of 10 most engaged with articles reveal that RT covered anti-lockdown protests in Australia, Germany and Netherlands in a negative light, using such expressions as “full-blown fascism.”

Buzzsumo analysis with the keyword search “anti-lockdown” reveal the extent of RT media channel covering the anti-lockdown protests. All of the articles written by this media outlet were highly critical of the lockdown measures. (Buzzsumo)

A similar trend was noticed with Sputnik News, which in the same period of time published 58 articles, garnering over 3000 engagements. Analysis of the top 10 most engaged with articles revealed coverage of anti-lockdown protests in Germany, United Kingdom, United States.

Buzzsumo analysis with the keyword search “anti-lockdown” reveal the extent of Sputnik News media channel covering the anti-lockdown protests. All of the articles written by this media outlet were highly critical of the lockdown measures. (Buzzsumo)

Examples of pro-Kremlin fringe outlets extensively covering anti-lockdown protest were also reported. One of such examples is a German alternative media outlet Rubikon, that is affiliated with Kremlin-owned media outlets. RT journalists are present on the advisory board of Rubikon and some of the RT journalists’ articles regularly feature on Rubikon website.

Lastly, as in most information campaigns, pro-Kremlin social media accounts are used to spread the pro-Kremlin narratives. A variety of troll, bot and “useful idiots” accounts can be found for years spreading narratives useful for Kremlin. A good example of such behavior are Twitter accounts @inhoclocu2 and @madogs93, both of which are already suspended from Twitter.

@madogs93 was recorded spreading the same message. Just like @inhoclocu2, this account was spreading pro-Kremlin narratives in 2016 and 2017. This is just a small example of how these accounts operate and tracing such activity is often times complicated due to the fact this activity is being reported and removed from social media outlets.

Such promotion of covid-skeptic messages and anti-quarantine protests, is very similar to promotion of gatherings and protests that were organized and fueled by Russian actors during the United States elections in 2016.

Other social media platforms are also used to spread COVID-skepticism and report on anti-lockdown protests. Alternative media outlet KenFM, ran by Ken Jebsen in German and English languages has been focusing heavily on corona-skeptic topics. This outlet has been reported to have ties with the Strategic Culture Foundation (Kremlin-owned think-tank).

Trends of pro-Kremlin information actors are found to be fueling the anti-lockdown and corona-skeptic narratives in various EU countries and the United States. As often is the case, these pro-Kremlin actors use opportunities sow chaos and discord in Western democracies, including the times of the worldwide coronavirus pandemic. These trends are especially visible on social media, where well known pro-Kremlin actors establish themselves as critical voices in biased Western information environment. Traces of clandestine information operations on social media can also be traced, where bots and trolls are spreading the corona-skeptic narratives under the guise of real people identities.

Lukas Andriukaitis is an open-source researcher and trainer, focusing on Kremlin disinformation and military involvement in conflicts around the globe. For the past several years he has focused on Russian involvement in Ukraine, Syria, Libya, and Venezuela.