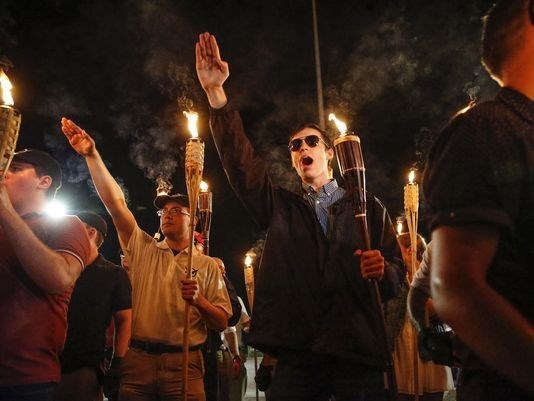 By Kseniya Kirillova, for EUToday

The past month was marked in the United States by a series of highly disturbing events. This includes a clash with ultra-right extremists in Charlottesville, and, more importantly, President Trump’s reaction to this event, writes Kseniya Kirillova for EU Today.

Recall that for a long time Trump refrained from criticizing American neo-Nazis, saying that in this tragedy “both sides are to blame”, a position which caused widespread public outrage, but a praise from the right-wing extremists. Then, under public pressure, he was forced to condemn the radical right, but soon returned to his initial statements, saying that some of these people were “real patriots.”

At the end of the month, Trump made another decision which aroused indignation of a large part of the American public. He pardoned the former sheriff from Arizona Joe Arpaio, who on his own initiative created a prison for illegal immigrants and called it a “concentration camp.” As a result, some American media have suggested that the US president is deliberately “flirting” with the extreme right.

In fact, the situation is somewhat more complicated.  It feels as though today’s White House is profiting from the polarization of American society. Even during the campaign, Donald Trump counted on the radicalization of his supporters, creating an image of the destruction and decline of America and exaggerating the existing problems. After the election, this behavior escalated, but this time the target of radical Republican propaganda was not immigrants or minorities, but all critics and opponents of the incumbent president, including journalists, prosecutors, judges, representatives of the intelligence community and even the former director of the FBI.

Earlier, I noted the similarity of the propaganda tactics of the extreme right-wing American media and methods used by the pro-Kremlin propagandists. This includes a direct lie, the denial of proven facts, and all kinds of slander, including all kinds of conspiracy theories.

In particular, radical Republican propaganda portrays any criticism of Donald Trump as stemming from the “conspiracy of the left”, “paid for” by George Soros or personally by Hillary Clinton. Thus, in the article justifying an attempt at collusion between Donald Trump Jr. and the Russian lawyer Veselnitskaya, anyone opposing it is stigmatized in the very first paragraph as the “left” and “socialists”. But in reality, in the first place, the extreme left is not very numerous in the Democratic Party itself, since the real left radicals follow rather anarchist views, and have a negative attitude toward the state and any political parties.

In the second place, it is absolutely wrong to reduce anti-Trump attitudes to political differences. The behavior of the incumbent US president is perceived as unacceptable by people of different views, primarily by national security experts, who, because of their work, most often have no particular party sympathies. Moreover, a significant portion of the Republican Party have categorically refused to accept Trump.

Suffice it to say that this is the reason why some previously loyal Republicans broke away from the party and created an alternative conservative movement, acting exclusively from patriotic convictions. The leader of this “Stand Up Republic” movement was former CIA officer Evan McMullin. Recently, there were media reports that in the next presidential election in 2020, there is a possibility that a tandem of Republican John Kasich and Democrat John Hickenlooper will be nominated. Thus, it is obvious that the bulk of American society adheres to very moderate, centrist views. The main problem of the United States is that such sentiments are not yet reflected in the highest echelons of American politics.

However, this whole multifaceted reality simply does not exist in the radical Republican propaganda. Fringe right-wing media actually created their own virtual world, in which “the genius and savior of America” Trump opposes the “left-wing conspiracy,” secretly directed by Obama and Clinton. Since both of them have not influenced US policy for a while, their images are demonized strictly with the help of propaganda. Reading such publications sometimes creates an impression that it is Obama who continues to be the president of the United States, while Trump’s ignorant and offensive statements that are rejected by the bulk of the American society have never been uttered.

By creating an artificial enemy, the new White House administration was able to get away with ignoring all the real problems and maintain the backing of at least the notorious 36% who still support Trump. A side effect of this tactic was the intensification of the activity of various nationalist groups, including those completely autonomous from the presidential administration.

In addition, the right-wing radicalization inevitably causes radicalization at the opposite end of the spectrum, which is also beneficial to the current administration, since the left extremists fit into the propaganda clichés of Trump supporters. At the same time, according to the US edition Politico, US law enforcement agencies note that it was “Trump’s inciting rhetoric and politics – first as a candidate, and then as a president, that contributed to the creation of a situation that has escalated so quickly and so far, and wide that the law enforcement is unable to cope with it.”

Of course, left-wing extremism has existed in the American society even before the elections, but what sets it apart from the right-wing extremism is that it has no support on the political spectrum of America, and, in essence, does not seek to lobby its interests through government channels. As mentioned previously, left-wing extremists hold anarchist views, and are hostile to the state as such (recall the protests and riots in Ferguson during the presidency of Barack Obama).

Even under the previous administration, this group of people viewed the state as an instrument of coercion. To attribute the views of these people to the entire Democratic Party, and especially to all of the Trump’s opponents, is a typical propaganda fiction aimed only at strengthening the image of the enemy and dividing the society even further. Moreover, the paradox is that Hillary Clinton’s “shift to the right” during her election campaign pushed this group away from the Democratic Party, and some of the extreme left voted for Trump, agreeing with his populist rhetoric with its occasional neo-Bolshevik passages.

The American extreme left is often characterized by the rejection of patriotism as such. It is they who, even under the previous administration, openly burned American flags and organized street riots. Many of them are sympathetic to Russia and are fans of RT. Most people who hold such views react negatively to any state bodies, primarily law enforcement agencies, seeing in them a mechanism of repression and coercion. The paradox is that, even if some American politicians try to “flirt” with this group, the left-wing anarchists cannot or do not want to effectively take advantage of this situation, and remain steadfast in their distrust of any officials.

The “left-wing” groups, of course, have their own media, but it’s completely wrong to include respected American media outlets among those. Extreme left-wing publications also do not shy away from propaganda, but it mainly boils down to the exaggeration of the ethnic conflicts and the plight of minorities. They are not overly devoted to conspiracy theories, with the most fanciful among them being a story about a complete merger of the Trump’s administration with the law enforcement agencies, especially the FBI. Of course, this does not correspond to reality.

Of course, like any other extremism, left-wing extremism is dangerous and unacceptable, but the paradox lies in the fact that its inherent anarchism makes it much less dangerous than the right-wing one. People of such views are accustomed to expressing their beliefs in the streets, but they prefer to stay away from real politics. They do not seek to lobby their interests through state channels, and thanks to outspoken attacks on state symbols this movement remains very marginal and not so numerous as the ultra-right propagandists would make us believe.

The extreme right is also more dangerous because, first of all, their hatred is not directed at a faceless state, but at distinct groups of people. Their ideology includes openly fascist and Nazi groups, and is not limited to nonspecific anarchism. They are no less inclined to violence than the leftists, but, unlike the extreme left wing, they do not avoid the government. Rather, their anarchism boils down to the struggle with individual American institutions and freedoms, but at the same time they’re not against establishing a dictatorship that is advantageous to them. They support leaders who they consider to be on their side, actively push them into power, and then become one of the important tools of blackmailing the rest of the society in order to retain this power.

Moreover, despite the fact that the Kremlin actively supports radical movements of all stripes, the connections of the far right with Moscow are much deeper and more systemic than those of the extreme left. Several American publications published materials detailing the relationship of several “white supremacists” with Russia, including the odious Russian ideologist Alexander Dugin.  American writer Zarina Zabriski came to similar conclusions and the Voice of America notes that the Russian Vkontakte network has become the home of the American ultra-right. And these sympathies for Russia are another feature that unites extreme rightists with Donald Trump.

Thus, the right-wing extremism in the US, encouraged by the secret complicity of the White House and the open support of the Kremlin, has become a truly dangerous phenomenon. At the same time, left-wing anarchism, which is becoming increasingly radicalized in this environment, only plays into the hands of the extreme right and becomes the “scarecrow”, which right-wing propagandists use to smear a large part of the American society.

By Kseniya Kirillova, for EUToday