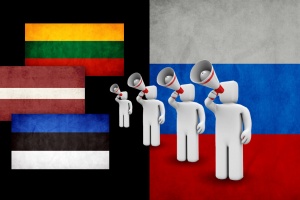 One of the main components of a hybrid or non-linear warfare is the information and psychological influence. The purpose of these information operations as part of a hybrid war is the impact on a target audience, its mind control, and the influence on people’s emotions. Such operations are very harmful and dangerous. They must be fought depending on the situation, but with consistent use of effective and appropriate measures.

In the past decade Kremlin has increased its aggressive rhetoric. Moscow often switched from hostile words to aggressive actions – up to outright lies in the form of propaganda on the state level, political and economic pressure, and sometimes direct military aggression. This was the case with Georgia in 2008, and with Ukraine, starting from 2014. Ukraine – is one of the many victims of the Kremlin’s information aggression. Hybrid war is waged against Ukraine at all levels, including a direct military intervention by Moscow. Therefore, information and psychological war against Ukraine is just one of the components of the Ukrainian-Russian conflict.

Among the other instruments of pressure are, for example, information and cyber-attacks against the E.U., Ukraine and Turkey, and sometimes it is very difficult to find a protection from them.
Moreover, the arsenal of information and political influence of Moscow includes blackmail (and specifically nuclear), all sorts of threats and intimidation techniques. For example, in August 2014, Vice-Premier of the Russian Federation Dmitry Rogozin said that in the case of an attack Russia will use its nuclear weapons.
Putin’s regime is fighting the information war on various fronts – against the Baltic States, Turkey, USA, and many other Western countries. Any state can become a potential victim of the Kremlin’s information aggression, particularly the post-Soviet countries, which are especially important for Putin.

Moreover, Putin’s regime shows a special interest to many countries in the Middle East, the Caucasus, Central Asia and the Balkans. Serbia is the best graphic example. Serbia’s accession to the European Union, scheduled for 2019-2020 is haunting Putin and his Kremlin comrades. For the last decade, Kremlin has tried different ways to create its enclave in Serbia, like in the Moldavian Transnistria.

The main goal of Putin’s regime is the re-creation of the Empire within the borders of the former USSR and taking Europe in its sphere of influence. However, his plans are much more ambitious than just the restoration of the Soviet camp. Eurasian Union, infamous as the “Russian world” is just one of Putin’s ideas. Pro-Russian centres are being established or have already been set up in a number of European countries to influence their foreign and domestic policy.

The Bronze Night in April 2007 in Tallinn is one of the examples. It was then when many pro-Russian activists took part in riots and disturbances surrounding the relocation the Soviet World War II memorial. One can only guess what role the Russian security services played in that provocation. But in any case, all the Russian media were immediately involved in the shameless misinformation campaign against the Estonian state and the Estonians.

Though the Kremlin had not succeed in provocations and media campaigns against Estonia in the spring of 2007, its interest to the country did not die out. Just like to Latvia and Lithuania. After all, the Baltic countries, due to their geopolitical location, are one of Moscow’s objects of desire. Therefore, the Kremlin is trying tirelessly to influence the residents of these countries and their policies. Moscow began to do this ever since the collapse of the USSR, and the degree of Putin’s information aggression was gradually increasing, creating a negative image of the Baltics in the Russian and pro-Russian media.

For example, Estonia. The fact that for more than ten years Estonia has been a member of NATO and the E.U., which guarantee the country’s security, makes the Kremlin restless.
Russian speakers make up 26-27% of the Estonian 1,300 000 population, and most of them live in Tallinn and in the north-east of the country.

Of course, there are people with different views and beliefs among the Russian-speaking Estonians. There are those who are loyal to the state and are ready to serve voluntarily in the army or police.
But let’s not forget about the neutrals – those people who do not care about the politics, and do not support any of the parties.

There are also those who are openly pro-Russian, and avid fans of Vladimir Putin are also among them. This group of pro-Russian citizens may be the biggest problem in terms of security, and they are the subjects of special attention of Russian agents and intelligence. Many of them do not even conceal their second citizenship – of the Russian Federation. This stratum of Estonian Russian-speaking population is the main target audience of the Russian propaganda machine.

Radical groups, politicians and public figures who have no relation to the “Russian world” and represent a variety of right-wing and ultra-right movements, often play into the hands of the Kremlin as well. For example they urge people to resist the flow of refugees from Syria. The flow, which does not exist in Estonia. A dozen of refugees is not no flow. But such manifestations of xenophobia or any other social conflict in the European society is actively used by the Kremlin to achieve its goals.

The presence of the whole range of the Russian media in Estonia is one more reason for concern.

Russian TV channels like NTV or RTR, newspapers like Moskovsky Komsomolets and some Baltic Russian-language media from time to time give the information in line with the Kremlin’s policies. Social media, such as VKontakte and Odnoklassniki which are very popular among the Russian-speaking residents of Estonia, are also an important instrument of influence.
Moreover, the notorious Sputnik has recently opened its branch in Estonia. Although it faced some difficulties at the start, it is currently operating at full capacity, publishing fake news or distorted propaganda messages. So-called media club “Impressum” is also worth of special attention, because of its clearly anti-Estonian actions and activities associated with the Kremlin.
These are just some examples of the Kremlin’s leverage, but in fact Moscow’s arsenal is much wider, including attempts to destabilize societies, cyber-attacks, misinformation, political and economic blackmail, intimidation, deception, bribery, etc.

What conclusions can be drawn and what should be done to enhance the information security?

One should be particularly vigilant when it goes about the Russian media. It is important to realize that the Russian propaganda is very dangerous and directed at different target groups with the aim to destabilize, to wreak havoc and distrust, and sometimes fear and hostility.

However, awareness is not enough, it is necessary to resist and build immunity against the harmful influence.

As for Sputnik, in the case, if it is found guilty of inciting ethnic hatred, its activities should be limited or prohibited, in full compliance with the law, of course.

About the author: Vladimir Sazonov is a research fellow at the Estonian National Defence College and a senior research fellow at the University of Tartu Centre for Oriental Studies. He holds a doctoral degree in history. Sazonov’s main research areas are the national ideologies, propaganda, political history and religious studies of the Middle East, and Russian information warfare.