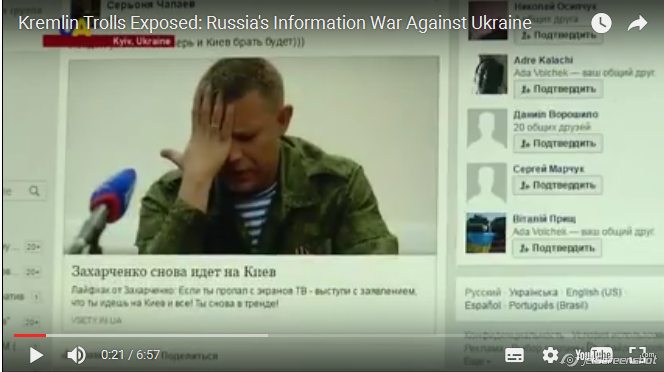 UKRINFORM journalist Lana Samokhvalova found something strange while browsing facebook for a schedule of commemorative events dedicated to the Euromaidan Revolution– she accidently unearthed an entire network of very suspicious, self-identified “Ukrainian patriots.” She quickly realized they were Kremlin trolls who had been working systematically to destabilize the situation in Ukraine:

“There was a very distinct pattern. Every two-three days, they’d urge people to bring Molotov cocktails to these commemorative events. To overthrow this government, to throw their Molotov cocktails and march on the government. It was very a distinct and systematic call for violence.”

The moderator of the group, Mykola Hayduk, called himself Stepan Mazura at the time. It’s hard to keep track of who’s who; they change their display names regularly. But Lana pinned him as the lead author, primary source and instigator of would-be riots. In truth, however, he had no connection to Ukraine whatsoever– except for a patriotic profile picture.

“I got some scans of his internet browser. I found out that he’d been online in St. Petersburg, Moscow and the Moscow Oblast. It was just direct proof of what had been obvious from the very beginning of the investigation.”

Mykola Hayduk is just one cog in a larger Russian information war machine. Russia seems prepared to spend whatever it takes to destabilize Ukraine, Europe and the rest of the Western world. They do this by hiring thousands of trolls.

Social activist Liudmyla Savchuk knows a lot about how this Russian troll factory works. She was able to infiltrate the Kremlin troll army:

“They’re everywhere — Facebook, Vkontakte, LiveJournal, Odnoklassniki. They make their own fake news sites. They create their own news agencies. They pretend to be Ukrainian journalists. They write as if they’re Ukrainian journalists.  As if they’re from Kyiv or Kharkiv, but they’re really in Russia. They simply take a news piece, re-write it how they need it, distort the information and send it out into the world.”

According to Liudmyla Savchuk, there are more than 400 Kremlin trolls in the Saint Petersburg office alone. They work 12-hour shifts following specific instructions and are paid $1000 a month. It can lead to tragic consequences:

The tragic consequences and sheer scale of this information war piqued the interest of another Ukrainian journalist — Roman Kulchinskiy.

With the help of his colleagues, Roman has exposed about 2,000 Kremlin trolls. He’s studied their methods. The way they push buttons. Discredit the government. Play on the emotions of everyday Ukrainians.

“Their aim is to lure real people into their networks and get their victims to believe in them. When people get trapped in this environment, they become surrounded by hatred, they start believing that things are worse than they were under Yanukovych. The trolls always emphasize this. That Maidan was a mistake, and that it made things worse. That the government’s the same. That something needs to be done. That they need to violently overthrow the government. […] Trolls register very often. One troll might register up to 70 accounts. In Maslow’s hierarchy of needs, one of the most important needs is human desire to be accepted and valued by others. Just imagine a person surrounded by 70 people, who are giving you specific information. But those 70 accounts are really just one person.”

To operate effectively and sow the seeds of doubt, Kremlin trolls are divided into different groups. Roman has noticed four distinct types.

“A real person actually writes… Even if they’re politically engaged, if they’re very worried about the country and are interested in politics, a real person posts personal things. About friends, travels, et cetera. If you go to their page and can’t find one post about their personal life, it’s a sight that this isn’t actually a person.”

Always pay attention to what’s happening on a page. Trolls might post some cute memes or cat photos. But when it comes to political issues, they toe the Kremlin line.

“When 70 to 80% of the page’s content is treason, or how bad things are in the country, then there’s a good chance that this was made for you in Moscow. A second thing to look out for are calls to violence. If they’re systematically pushing violent ideas, that violence is the only way to solve your problems, then that’s made for you in Lubyanka.”

Moreover, experts advise that you never respond to their posts, because the more reactions a troll gets, the more money they get paid. And don’t be naive. Always double check information. The days of a bias-free or non-politically-charged internet are long gone:

“Never believe a single article. Always double check information with a reliable, trustworthy source. Or look for other, official sources. If there are inconsistencies, then you’re dealing with a troll or you’re being trolled. It’s knowingly false information intended to deceive.”

There’s a legion of them. Their weapons are lies and manipulation. They need a large army of zombies to further the Kremlin’s plan. But recognizing them is simple: double check your information.

By UA TV, for Euromaydan Press