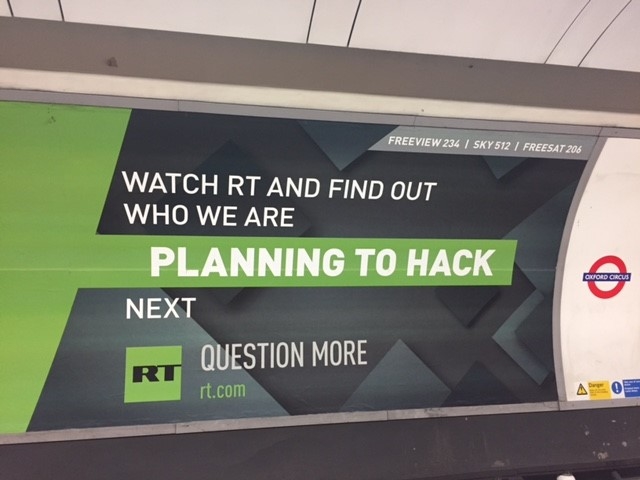 Federica Mogherini now claims that the EU is using sufficient means and resources and cannot take the Russian threat more seriously. As we stated in the Open Letter of European security experts, the EEAS East STRATCOM Team must be at least tripled in size and receive a budget in the single millions of EUR, so it can start fulfilling its mandate in real terms. Only three experts in the EEAS East STRATCOM Team are tasked with countering pro-Kremlin disinformation, which means that Federica Mogherini still doesn’t take this threat seriously.

Even if there is no language variant of Sputnik in your country, fringe groups and “alternative” media can do even more damage than official Russian channels. It should be part of each country’s basic hygiene and self-defence to investigate the possible links, whether financial or ideological, of such entities to the Kremlin. Groups like the Baltic Elves are a good way to go.

In context of the US investigation regarding the role of social media in the Russian-linked election meddling, we should start looking into regulation for public advertising. Google recently removed RT (formerly Russia Today) from Google Preferred, “a package of premium YouTube video inventory that the company sells to advertisers”. But we cannot expect social media companies to do all the work and then place RT advertisement on the walls of every tube station in London and other capitals. Detailed public scrutiny of RT’s activities, as well as those of other Russian media and proxies, must start happening now.

This is Armenian Radio; our listeners asked us: “Why did butter disappear from the stores’ shelves?”

We’re answering: “It all has melted under the sun of the Soviet Constitution.”

Big Tech in the spotlight: Updates on the Russia election probe

Congressional investigators are drawing the conclusion that the pathway “to understanding Russia’s election meddling runs through the technology industry”. Facebook, Twitter, and Google – companies that retain enormous power over users and information – are facing growing scrutiny about their role in enabling Russia’s disinformation efforts during the election. New reports detail how Russia faked ‘black activism’  and organized protests to seed discontent in the US, while a roundup of the ads purchased by Russia-linked groups identifies a focus on topics related to Black Lives Matter, LGBT, Muslims, immigration, and militancy. (This article explains how simple it is to buy a Facebook ad just like the troll operatives at the St Petersburg troll factory.) It has also been determined that Wisconsin and Michigan – two crucial swing states that went to Trump – were the key targets of the Facebook ads.

Facing the pressure of impending public hearings, the Big Tech platforms are scrambling to conduct internal examinations and demonstrate cooperation with lawmakers. Google is undertaking a broad internal investigation of Russian-linked entities using its ads or services to manipulate voters whilst simultaneously speaking with congressional officials. In addition, Google recently removed RT (formerly Russia Today) from Google Preferred, “a package of premium YouTube video inventory that the company sells to advertisers”.

Twitter’s policy chief has also briefed Congress about Russia’s exploitation of the platform; however, Senator Mark Warner (D-VA) of the Senate Select Committee on Intelligence criticized the presentation as “inadequate on almost every level”, implying that the company failed to understand the extent of the threat to American democracy. Meanwhile, Mark Zuckerberg expressed regret for having dismissed as ‘crazy’ the notion that Facebook was used as a channel for fake news to sway the election.

The fight isn’t over…

The heads of the Senate Select Committee on Intelligence, Richard Burr (R-NC) and Mark Warner (D-VA) have jointly declared that Russia’s disinformation campaign is not over, and warned  that further manipulation efforts should be expected in the upcoming November and 2018 congressional elections.

Our favourite online journal Vzglyad analysed the current state of play in Europe after the German elections and the Catalonian referendum, concluding that Europe is effectively entering a new stage in its history. European integration is going to destroy nation states if the main engine of the process, Germany, does not stop it. Vzglyad predicts the integration process will speed up and the EU will become more centralized.  The only possible alternative is an exchange of elites and, above all, active rejection of the path of violent integration. Who promotes these ideas? Of course, the National Front and AfD! So yes, Vzglyad, loudspeaker of the Russian governmental institutions, predicts that these parties will save Europe. Happy times ahead of us.

Adoption of the “Canadian Magnitsky Act”

Russia is profoundly disappointed by the adoption of the Justice for Victims of Corrupt Foreign Officials Act by the Canadian Parliament on October 2. This act, inspired by the American Magnitsky Act, will, according to Russia, further undermine Russian-Canadian relations, as it is explicitly designed to introduce sanctions against Russian citizens. Russia has warned Canada that this action will not go unanswered, meaning Moscow will expand the list of Canadian officials banned from entering Russia. But Moscow is trying to be the bigger person here and still hopes that common sense will prevail in Ottawa.

The Russian narrative has not changed over the past years as Moscow claims that attempts to isolate Russia have failed and that the West is likewise trying to isolate itself from Russia (big question mark about this logic). And here is the favourite line of all – this policy is actually harming the interests of the West, in particular by obstructing joint efforts to combat terrorism, bilateral cooperation in the Arctic and other areas. However, we are not convinced that Russia is genuinely interested in joint efforts to combat terrorism as Moscow continues to criticize its allies on Syria.

Clash with BBC and double standards

Moscow has been complaining about Simon Reeve’s documentary film about Russia, recently aired on BBC Two, which addresses the journey of British journalists to the Russian Far East and is timed for the centenary of the Russian Revolution. Moscow had a lot to say about the poor quality and politicization of the topic and dismissed the crew’s statements about their experiences of harassment and detention by the Russian security agencies. Moscow not only downplayed these claims but accused the BBC of broadcasting Russophobic stereotypes instead of reality. Indeed, that story made it into the Russian Foreign Ministry’s fake news section. This story, meanwhile, goes into our fake news section.

for effectively acting as Putin’s puppet.

The Kremlin’s little helpers in Romania

The Kremlin’s disinformation campaign operates in variety of ways. It is not always sufficient to be aware of official channels like Sputnik or RT. In many countries, the propaganda machine consists of many little helpers, like radical and fringe movements or the so-called “alternative” media. Due to economic interests, desire for popularity, or pure adoration of Putin and/or the Russian machine, these proxies can help amplify the Kremlin’s messages without citizens noticing that they are being manipulated.

In an article for CEPA’s StratCom Program, Corina Rebegea noticed that such a case recently happened in Romania. The result was a petition to declare Hans Klemm, the U.S. ambassador to Bucharest, persona non-grata.

The Institute for Strategic Dialogue and the Institute of Global Affairs at the London School of Economics published the preliminary results of their monitoring of the attempts to influence German elections. After continuous rapprochement between Germany’s AfD and Russia’s United Russia over the last year, perhaps their report presents no real surprise. It describes mutual assistance between the AfD and pro-Kremlin actors via media coverage and Twitter bots. Also worrying is the assertion that even CDU politicians sometimes helped amplify and spread disinformation messaging originating in Russian tabloids.

The Centre of Excellence for Countering Hybrid Threats became operational in the beginning of the month. It has been established by the Finnish government. Estonia, Finland, France, Germany, Latvia, Lithuania, Norway, Poland, Spain, Sweden, the United Kingdom and the United States are currently participating in its activities.

The EU High Representative Federica Mogherini welcomed the establishment of the Center at the conference in Brussels dedicated to hybrid threats and the EU. She stated that “We are all affected, in Europe and beyond, and we all need to mobilise with the means and the resources at our disposal. This is what the European Union is doing already and we couldn’t take this issue more seriously.”

Unfortunately, her statements mostly highlight her shallow understanding of the problem and avoidance of real action. During her speech, she praised the activities of the Hybrid Fusion Cell, a low-key body within the EU, which is tasked with analysing hybrid threats. In comparison, she mentions the EEAS StratCom Task Force, which is doing the most tough but potentially game-changing job, only once. When it comes to the main culprit of the whole problem, the Russian Federation, the number of mentions is – unsurprisingly – zero.

Russia uses many different tools to boost its international influence; some of them, like disinformation or the use of cyber warfare, attract a lot of attention, while others are largely overlooked. One of these latter mechanisms is trying to influence expert communities and wider public opinion in the West using the help of think tanks and similar government-organized non-governmental organizations (GONGOs), which is exactly what this report by the Swedish Defence Research Agency focuses on. The report offers  a comprehensive overview of this issue and also contains nine case studies of specific think tanks.

Overall, the extent to which the think tanks and GONGOs tend to promote the country’s official agenda varies, with the ones that have the widest interface with reputable Western researchers being less propagandistic. The ones that convey the Russian official message more obviously often create networks with less mainstream (and sometimes more extremist) organizations in the West. To find out about specific think tanks and more, have a look at the report.