Head of MI6: Putin should not underestimate British determination and capabilities.

US Secretary of Defense Mattis has accused Vladimir Putin of continually “mucking around” the US midterm elections.

From the Kremlin leadership to consumers – what the Russian disinformation chain looks like, according to RAND.

A poll question in a Russian newspaper:
“Who is your favourite historical figure and why is it Lenin?”

Head of MI6 responds to Putin’s offer for better relations

At the G20 summit, Putin attempted to instigate a thaw in relations between the UK and Russia, stating that he hoped the two countries could overcome their troubled relationship as soon as possible. Alex Younger, in what is only his second public speechduring his four years as the MI6 chief, reminded Putin that he shouldn’t underestimate Britain’s determination and capabilities and that MI6’s “intention is for the Russian state to conclude that whatever benefits it thinks it is accruing” from its aggression and subversive activities, “it is not worth the risk”. He also mentioned the arms race between different spy agencies to secure better technology over rival states.

Compared to most of the security institutions in Central Europe, the Czech Security Information Service (BIS) managed to describe Russian and Chinese intelligence activities in the Czech Republic in a remarkable detail. There are several points in the latest Annual Report we would like to highlight: 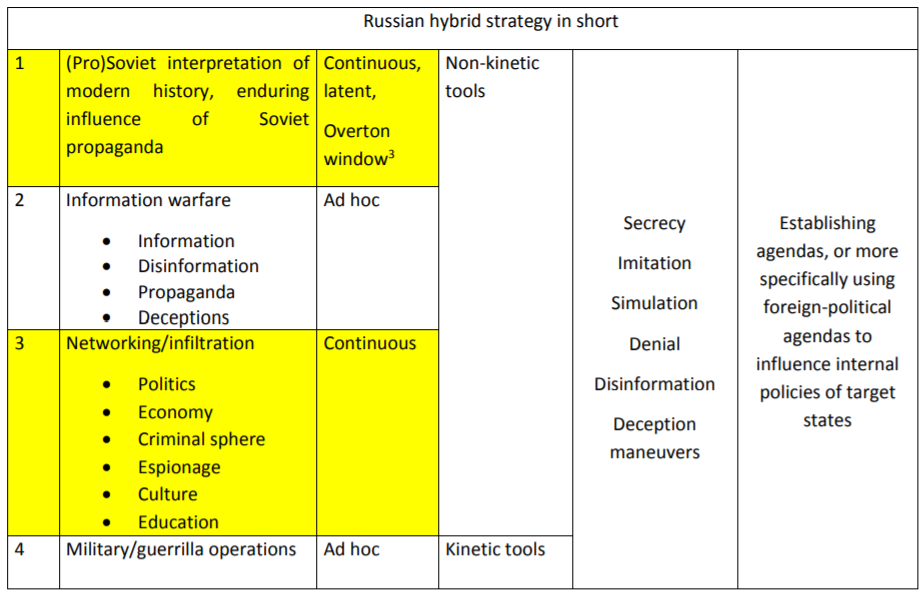 Andrei Belyi writes for the ICDS about the change to the social contract in Putin’s Russia. Since Putin’s first presidency, the state income has been predominantly based on duties collected from the export of Russia’s oil and gas. This advantage allowed for the relatively low taxation of Russian citizens and provided a basic level of welfare support. However, faced with Western sanctions, lower oil prices, and low domestic economic growth, Putin’s Russia has been forced to look inwards for collection of state revenue, in particular by setting new taxes on domestic oil production, which has remained largely exempt from taxation. The new taxation on the oil industry will likely result in higher prices for gasoline and heating fuel across Russia, which could have unpredictable socio-political effects as the “ex-homo Sovieticus still considers low fuel prices a core social right.”

Russian influence in the media sectors of the Black Sea Countries

The Center for the Study of Democracy has released a new paper on Russian influence in the media sectors of the Black Sea countries. The report finds that patterns of ownership, economic dependency and (in)formal political links of media outlets to pro-Russia groups and interests are reflected by Russia-originating propaganda narratives. The report concludes that the Black Sea countries have an overall low resilience to Russian propaganda, which is due to their heavy vulnerability on political and economic influence from pro-Russia actors, lack of media ownership transparency, dependence on large commercial advertisers, and the oligopolization of media markets.

In terms of recommendations, the report states that the EU must better use the Eastern Partnership initiative in order to combat media capture in the region, while Black Sea countries must become more active in sharing and pooling expertise, strengthening regulatory bodies, and creating independent public monitoring tools.

Iran learning the tools of the disinformation trade from Russia

A Reuters investigation into the use of disinformation by Tehran uncovered trends and tactics similar to those employed by Russia. A network of accounts and webpages, claiming to be local and independent news outlets in the Arab world, are registered to street posts or demolished buildings, yet are amplifying pro-Tehran messages or sharing fake stories in volatile regions such as Yemen and Egypt. The investigation found more than 70 websites that promote Iranian propaganda in 15 countries and collectively are visited by more than half a million people each month, supported by Twitter accounts with over a million followers. A central agency behind this disinformation, resembling the Kremlin’s troll factory, is the International Union of Virtual Media (IUVM) which states its core objective as “confronting with remarkable arrogance, western governments and Zionism front activities”. The impact of Iran’s disinformation operation can be seen in the case of a fake story that was disseminated by an Iran-linked account, which claimed that Israel had threatened to use a nuclear strike on Pakistan should the latter send ground troops into Syria. The false story prompted the Pakistani defence minister to issue a real nuclear deterrence threat to Israel in response.

Despite high anxieties and (seemingly) muted Russian activity, US Secretary of Defense James Mattis accused Russian President Vladimir Putin of interfering, or rather ‘mucking around’, in the recent US midterm elections, adding that the US is seeing a “continued effort” in such disruptive actions. The high-level confirmation comes amid President Trump’s decision to sideline a formal sit-down with Putin at the G20 summit, and as American policymakers await the results of an inaugural electoral probe conducted by the US intelligence community. Following a September executive order, the Director of National Intelligence is charged with providing an assessment of foreign interference within 45 days of a US election, the first of which is expected to be delivered towards the end of December.

Kerch Strait is a test of US leadership

In response to Russia’s internationally condemned and unprovoked move to fire upon and seize three Ukrainian navy vessels along the Kerch Strait, Senate Democrats and Republicans are pressuring President Trump to take decisive action against Moscow’s destabilizing transgressions. Passed unanimously, their recent Senate resolutionrecognizes Russia’s sharp escalations as a “blatant violation of its commitments under international law”, upholds US policy to “never recognize Russia’s attempted annexation of Crimea” and “calls upon the President and the entire Administration to implement an all-of-government approach to forcefully express opposition to the Russian Federation”.

Despite inspiring similarly powerful rebukes from senior US officials, Trump’s apparent trepidation in outwardly confronting Putin signals a critical failure in US resolve against Russia, and for some commentators, demonstrates how little Putin fears the West in the absence of clear US leadership on the matter. Without firmly establishing a red line, argues Brookings’ Dr. Alina Polyakova, an emboldened Kremlin will only continue to push its agenda with impunity.

Since curbing student visas for Chinese graduate students earlier in the year, US officials are reportedly considering further background checks in response to heightened fears over China’s party-state espionage activities. According to Reuters, more stringent methods of vetting Chinese students, prior to undertaking studies in the US, may include examining phone records and social media across US and Chinese platforms for “anything that might raise concerns about students’ intentions in the United States, including affiliations with government organizations”. While not only deepening the ongoing trade and diplomatic tensions between Beijing and Washington, the move poses challenging implications for other nations considering a similar response.

Preventing or discouraging Chinese students from studying in the US has rung alarms with the elite colleges that have become increasingly dependent on the approximately 360,000 Chinese students attending US institutions, prompting a US university to become the first in insuring against a potential drop in Chinese tuition. Moreover, policies that specifically target Chinese communities abroad open sensitive discussions over the risks (perceived or real) of tilting the balance between security and discrimination, placing Chinese students at risk of “becoming ‘pawns’ in the U.S.-China rivalry”.

This month, RAND published a comprehensive report detailing Russian social media influence in the United States. The researchers propose a framework called the disinformation chain to describe the actors and approaches of Russian influence on social media. The chain starts with Russia’s leadership – President Putin and the Kremlin, the military, and other high-level officials and Putin’s associates. Next follow the organs and proxies of the Russian state; individuals in and out of the government apparatus guided by motivations to satisfy the Kremlin rather than acting in accordance with a master plan. These proxies include actors who are aligned with the Russian state such as GRU officers and Sputnik, those not formally part of the state such as RT, and entities who act on behalf of the state but hide their association, such as the Internet Research Agency. The third link in the chain consists of the various channels through which Russian disinformation is intentionally or unintentionally amplified and the final link comprises the consumers of disinformation – US citizens and policymakers.