French President Emmanuel Macron announced that he will introduce a law against the spread of ‘fake news’ in order to “protect democratic life”. The new rules will focus on the pre-election period, during which time the removal of false content will be permitted. A further goal is to enhance transparency by making the identity of sponsors of social media content public. The precise character of the new legislation remains to be seen.

The Trump administration authorized the commercial sale of defensive lethal weapons to Ukraine. The move had broad support from Cabinet officials as well as Congress.

Vzglyad, an ideologically-driven online newspaper, published a list of the “most interesting articles of 2017”. According to the list, the sanctions against Russia don’t work and the isolation of Putin’s regime is a myth of Western propaganda.

According to Gustav Gressel, the European Union should not be afraid of Austria taking an anti-European direction. However, he considers it to be a threat that Austria may remain part of the European integration project while passing notes to the FPÖ’s allies in the Kremlin.

A New Russian’s son complains to his father: “Daddy, all my schoolmates are riding the bus, and I look like a black sheep in this 600 Merc.”

His father replies, “No worries, son. I’ll buy you a bus, and you’ll ride like everyone else!”

The German Marshall Fund’s Alliance for Securing Democracy has issued a call for applications for their new Rethink.CEE Fellowship.

The German Marshall Fund of the United States, through its Black Sea Trust for Regional Cooperation, is launching a new fellowship program for next-generation policy experts and analysts from Central and Eastern Europe.

It’s hard to imagine a more ideologically-driven online newspaper than Vzglyad. Thus, when Vzglyad compiles a list of its most popular articles, you know it will be an exciting collection of the Kremlin’s choice narratives. Let’s take a look at 2017’s ‘best’, according to Vzglyad

February’s most popular article was about a late commander of the terrorist forces in Russia-occupied Donbas, Mychail Tolstykh (aka Givi), who became notorious for his remarkable cruelty in treating captured Ukrainian soldiers. However, according to Vzglyad, “he was a talented military leader who emerged from the ordinary people and became a symbol of national resistance”. It is unfortunate that Vzglyad didn’t bother explaining to its readers which nation’s resistance is currently underway in Donbas… hint: it’s certainly not Russia’s!

Russia continues to claim that sanctions don’t work and that the attempted international isolation of the Putin regime is simply a myth of Western propaganda. Angela Merkel’s April visit to Russia was used to justify this point. As a Vzglyad columnist put it: “The Sochi voyage of not-so-friendly German lady and later phone call with Trump is strong proof that the iron ring of isolation with which EU and US are trying to strangle Russia is very weak.” The article ends on an even more optimistic note: “After 2017, it is simply laughable to talk about the international isolation of Russia. The iron ring has collapsed.”

Unsurprisingly, even tragic events are distorted and exploited for propagandistic purposes. Take for example the commentary on an attack against Russian journalist Tatiana Felgengauer. The Echo of Moscow correspondent was attacked by an armed man and stabbed multiple times. Tatiana and many of her supporters stated that this attack signifies a growing atmosphere of hate and unacceptability of views that are critical of the Kremlin and authorities. Vzglyad, however, took a different perspective: according to them, the attack on a journalist indicates “the steady decrease of the level of adequacy of the Russian liberal opposition.”

Perhaps Vzglyad should change its name to ‘news from a parallel universe’.

British Foreign Secretary Boris Johnson visited Moscow in December, being the first British minister to make an official visit to Russia in five years. Prior to his trip, he stated that “our relations with Russia cannot be ‘business as usual’ whilst Russia continues to attempt to destabilize European states, including Ukraine.” While relations between the UK and Russia are at a notably low point, Boris Johnson stated it would be in the interest of the international community if they improved. However, during a press conference in Moscow, he named several of the Kremlin’s recent transgressions that prevent a restoration of relations, mentioning “abundant evidence” that Russia interfered in German, French, US and other elections.

Meanwhile, the Scottish National Party has launched a new attack on disinformation after their former leader, Alex Salmond, broadcast a Christmas special of his talk show on RT, the Kremlin’s propaganda channel. On behalf of the SNP and the Scottish Government, Martin Docherty-Hughes, a senior MP, stated, “we firmly support the UK Government’s efforts in tackling Russian disinformation and propaganda”.

Ukrainian authorities have detained an interpreter for Ukrainian MP Volodymyr Groysman on the suspicion that he was working as an agent for Russian intelligence. The interpreter was allegedly instructed to gather information “about the activities of government structures”. In July, he accompanied Mr. Groysman on a visit to London and was photographed with British Prime Minister Theresa May at Downing Street.

What should we expect from Austria?

After the People’s Party of Austria formed a coalition with the Freedom Party – which cooperates with Putin’s United Russia party and maintains close ties with Russian conservative intellectuals, oligarchs and cultural organisations – questions have arisen about how Austrian foreign policy will change and how the Kremlin will make use of its new allies. The Freedom Party is slated to control the Ministry of Interior and Ministry of Defence. According to one report, Western intelligence services consider this a reason for reducing their cooperation with the Austrian Federal Office for the Protection of the Constitution and Countering Terrorism (BAT) on cases related to Russia. Der Standard reports the denial of any such claims by Peter Gridling, head of the BAT. The journalist who leaked the story did not reveal his source, but stands behind its veracity. 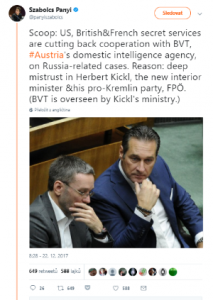 Gustav Gressel argues in a commentary for the European Council of Foreign Relations that while Austria is unlikely to change its stance on European integration, the new political equilibrium nonetheless poses a threat. The Freedom Party will be in charge of civilian and military counterintelligence services and according to Gressel, the EU might face the challenge of Austria not contributing to the integration process, but rather passing sensitive information to the Kremlin. He advises Europe to pay close attention to Austrian political developments, but emphasises that the Freedom Party was democratically elected and enjoys the right to hold divergent political views.

Although everyone now agrees that hybrid warfare is a security problem, few truly understand its character and implications. Since the prerequisite for solving a problem is understanding it, this week’s reading suggestion aims to improve public understanding of hybrid warfare by proposing useful tools that should facilitate understanding of both individual cases of hybrid warfare as well as the general issue. The paper, developed under the Multinational Capability Development Campaign, begins with the so-called Baseline Assessment, which aims clear up conceptual confusion regarding hybrid warfare and establish a common language. The authors address a spectrum of instruments of power that can be used by a hybrid warfare actor (MPECI). These are shown in the figure below: 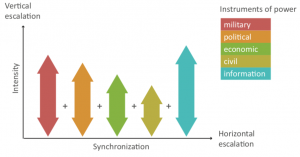 Although everyone now agrees that hybrid warfare is a security problem, few truly understand its character and implications. Since the prerequisite for solving a problem is understanding it, this week’s reading suggestion aims to improve public understanding of hybrid warfare by proposing useful tools that should facilitate understanding of both individual cases of hybrid warfare as well as the general issue. The paper, developed under the Multinational Capability Development Campaign, begins with the so-called Baseline Assessment, which aims clear up conceptual confusion regarding hybrid warfare and establish a common language. The authors address a spectrum of instruments of power that can be used by a hybrid warfare actor (MPECI). These are shown in the figure below: 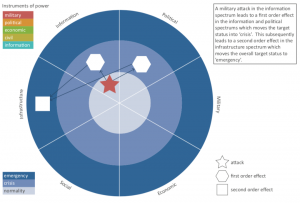 For that and a lot more, including useful recommendations, take a look at the paper!