British media reported that more than 156,000 Russia-based Twitter accounts spread messages about Brexit before the referendum took place in June 2016. In the 48 hours before the vote, more than 45,000 tweets about Brexit had been posted by these accounts. These findings come from a study published by data scientists at Swansea University and the University of California.

Freedom House published its latest Freedom of the Net report, which presents annual analyses and numerical ratings for the state of internet freedom around the world. Sadly, after surveying 65 countries and 87% of the world’s internet users, the findings provide little reason to celebrate. Nearly half of the countries assessed experienced declines in internet freedom, while just 13 made gains, most of them minor. Only a quarter of internet users live in countries assessed as “free”.

The US Federal Election Commission (FEC) passed a unanimous vote to start crafting new rules establishing disclaimers for online political advertising. It is a rarely decisive move for an agency typically wracked by gridlock.

At a May Day parade, a very old Jew carries a slogan, “Thank you, comrade Stalin, for my happy childhood!”

The Party representative approaches the old man. “What’s that? Are you deriding our Party? Everybody can see, when you were a child, comrade Stalin was not yet born!”

“That’s precisely what I’m grateful to him for!” the Jew replied.

The FEC votes to establish new regulations for political advertising

The US Federal Election Commission (FEC) passed a unanimous vote to start crafting new rules establishing disclaimers for online political advertising. It is a rarely decisive move for an agency typically wracked by gridlock. Accompanying the decision, the agency stated:

“Foreign interference in U.S. elections is inimical to our nation’s interests and democratic values. Disclaimers on paid digital and internet-based advertisements are one tool identified as a mechanism for exposing foreign-paid advertisements.”

An open-comment period preceded the vote, which saw contributions from the social media companies at the center of the controversy. Facebook said it supports the agency’s efforts “to clarify when tech companies must disclose the origin of political ads, and what those disclosures must include”, and also endorses “rules requiring greater transparency around candidate-focused ads that run in the weeks around Election Day, a move that would subject tech platforms to similar guidelines that currently apply to broadcasters and newspapers.” Google went a step further, suggesting that the FEC “should create a broad rule that would ban foreign entities from buying any kind of political ad aimed at influencing voters, not just the ones that mention candidates.” In a response to a question about Sputnik content appearing in Google searches, Executive Chairman Eric Schmidt said that the company was “working to give less prominence to ‘those kinds of websites’”. Meanwhile, Twitter offered the weakest position, proposing a ‘Transparency Center’ where users could view information about specific political tweets, but did not support outright disclaimers for them.

In addition, Facebook has announced that it is creating a portal, to be available by the end of 2017, to allow users “to learn which of the [Russian] Internet Research Agency Facebook Pages or Instagram accounts they may have liked or followed between January 2015 and August 2017. […] It is important that people understand how foreign actors tried to sow division and mistrust using Facebook before and after the 2016 US election.”

Separately from the Mueller probe, three congressional committees are currently investigating Russian interference in the 2016 presidential election and the Trump campaign’s potential collusion: the Senate Intelligence Committee, the House Intelligence Committee, and the Senate Judiciary Committee. So far, they have obtained thousands of pages of documents from campaign personnel and other officials and have held tens of interviews. Importantly, while the special counsel investigation can prosecute criminal activity, the congressional probes have more limited power and can only present their findings, publicize misconduct, and introduce relevant legislation in response. All three committees have expressed their commitment to thorough investigations and have said that, given the evidence and current state of enquiry, they are likely to continue well into 2018.

The hole in the Kaspersky software ban

Politico reports that the Department of Homeland Security’s ban on Kaspersky Lab software from US government networks doesn’t cover networks of government contractors, hundreds of thousands of whom hold top secret clearances. According to cybersecurity specialists, this is a considerable vulnerability that “could leave open gateways for hackers looking to pilfer government secrets”. This has allegedly happened in the past with contractors working for the CIA and NSA. However, legal experts say that the federal government is constrained in its power to mandate that contractors remove Kaspersky products from their hardware.

Developing story: Uber hackers may have been Russian

According to The Times of London, “Thousands of Uber customers are believed to have had their accounts hacked by Russians after users of the app reported being billed in roubles for taxi journeys they had not taken in Moscow and St Petersburg.” On Nov. 21st, Uber revealed that the personal data of 57 million users had been exposed in a massive hack in October 2016. In a bombshell revelation, at the time of the breach, the company paid hackers $100,000 to destroy the data and hide proof of the incident from users and regulators. This story is developing.

Quotes that show how Vladimir Putin sees the world

Nothing exposes the Kremlin’s narratives like the speeches of Vladimir Putin. RT gave an early Christmas present to acolytes of the Kremlin’s twisted worldview by way of a selection of the Russian leader’s quotes.

“Does it benefit European states to simply service Washington’s foreign and even domestic policy aims? I am not sure. Is this the purpose of serious politics, and is this the role countries take on if they desire to call themselves great powers?”

“There is no more Soviet Union, no Eastern Bloc. In my view, NATO needs an external enemy to justify its existence, so there is a constant search for one, and provocations to create adversaries where there are none. […] Today it is an instrument of American foreign policy. There are no partners in it, only vassals.”

“At one time, the EU welcomed the collapse of a whole range of states in Europe, not bothering to hide their glee. Why did they need to so thoughtlessly – for the sake of short-term interests and to please ‘Big Brother’ in Washington – unconditionally support the secession of Kosovo, provoking similar processes on the continent and beyond?”

On the toppling of Viktor Yanukovych in Ukraine

“What happened in Kiev is an armed and unconstitutional seizure of power – a coup. No one is arguing with that.

“The question is – why did it need to be done like that? Viktor Yanukovych had already given up his power, and had no chance of re-election. Why plunge the country into chaos? As a demonstration of power? This was a stupid decision and had the reverse effect. I believe it was these actions that destabilized the situation in the east of the country.”

for becoming another Russian ‘useful idiot’ in appearing on the Kremlin’s pseudo-journalistic outlet, RT, to discuss his grievances.

Peter Pomerantsev published an insightful piece in The American Interest, arguing that we must remember that the disinformation coming from the Kremlin is not illegitimate by virtue of being pushed by a foreign power, but rather because it does not fulfil journalistic standards and uses deceptive techniques. National governments, following the example of Germany or the Great Britain, should seek to create a framework in which it would be a cultural taboo for politicians and media to lie.

British votes were under heavy attacks

Last week, British media reported that more than 156,000 Russia-based Twitter accounts spread messages about Brexit before the referendum took place in June 2016. In the 48 hours before the vote, more than 45,000 tweets about Brexit had been posted by these accounts. The vast majority promoted pro-Brexit views. These findings come from a study published by data scientists at Swansea University and the University of California.

Furthermore, on the day of the referendum, the country suffered a cyber-attack targeting its media, telecommunications, and energy supply. These reports have been confirmed by the British cyber-defence chief Ciaran Martin.

After the news broke, an official petition was launched by Adam Bernard, a Liberal Democrat Parliamentary spokesperson for Harrow East. He is asking the government to open an investigation into covert foreign interference in the referendum. In an official response, the Cabinet Office acknowledged the Kremlin’s attempts to interfere in Western democratic processes and referred to its existing systems of defence and resilience. It did not include mention of a planned investigation or, in fact, any reference at all to Brexit.

The Atlantic Council has published a report pointing to European political parties that have been accused of cooperation or mutual support with the Kremlin. It is evident that the parties’ position on the political spectrum is irrelevant: the Kremlin cultivates ties with both far-left and far-right parties. According to the authors, the strongest influence is the case of the Five Star Movement in Italy. They also focus on the left-wing Syriza party in Greece. The last chapter is dedicated to the situation in Spain, which they presume might be the next significant target.

Freedom House published its latest Freedom of the Net report, which presents annual analyses and numerical ratings on the state of internet freedom around the world. Sadly, after surveying 65 countries and 87% of the world’s internet users, the findings provide little reason to celebrate. Nearly half of the countries assessed experienced declines in internet freedom, while just 13 made gains, most of them minor. Only a quarter of internet users live in countries assessed as “free”.

In terms of major developments, online manipulation and disinformation tactics are on the rise, having played an important role in elections in at least 18 countries. Even though most governments used these methods only within their own borders, some countries, such as Russia, used them to support their interests abroad. Authoritarian governments increased their use of bots to influence political discourse as well. Furthermore, internet freedom in many countries has severe legal restrictions, and independent news outlets, opposition, or rights defenders are often victims of cyber-attacks. Unfortunately, even physical attacks on netizens and online journalists spread all over the world. The report also mentions other unpleasant phenomena and features interesting visual representations of the data gathered.

In order to counter one of the most pressing issues – namely, content manipulation primarily on social media – the report suggests that we should among other things educate the public, strengthen regulations for political advertising, and push tech companies to be more proactive in solving this problem. Without such countermeasures, authoritarian regimes will expand their power and people might permanently lose confidence in online media and the internet as a whole. 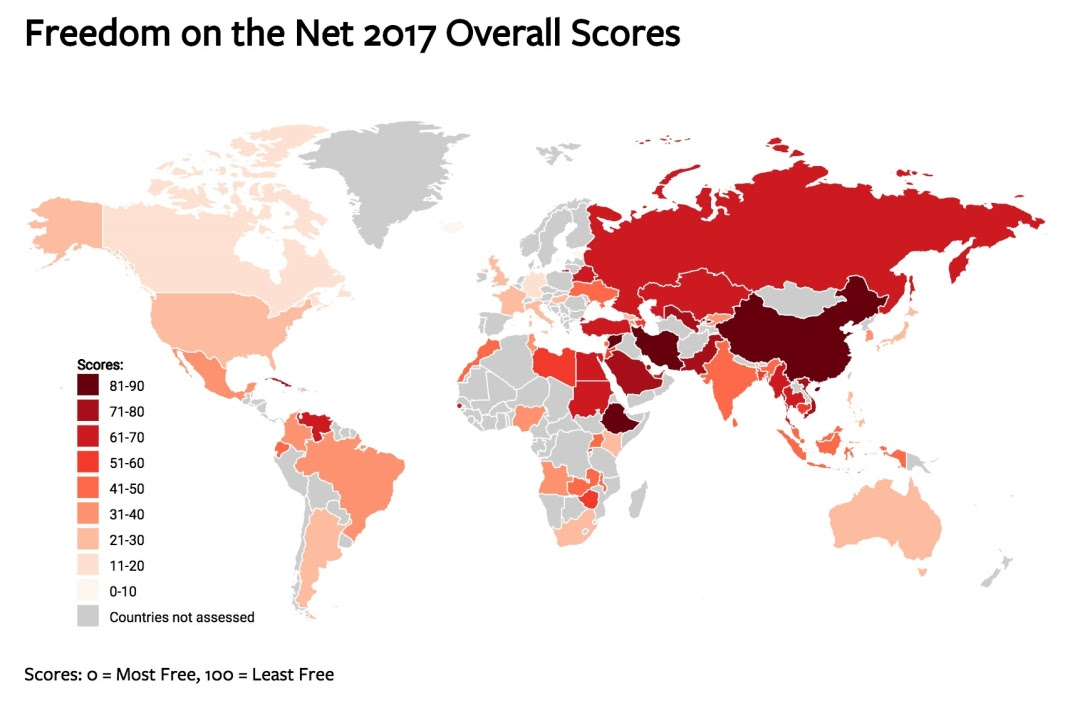