The Kremlin Watch Program is looking for an intern! If you would like to contribute to our work, send us your application for a four-month internship by February 11th. You don’t have to come to the Czech Republic to work with us, the internship can take place externally. More information is available on our website.

The US Treasury department will provide Congress with a new ‘blacklist’ of Russian oligarchs and businesses, which the latter have been scrambling to avoid. The impact is expected to be minimal, given the limited requirements of the legislation. The EU has been encouraged to join the effort to expand the sanctions list as well.

The integrity and objectivity of Euronews, partly funded by the European Commission, has been questioned after praising the Russian army for teaching Crimean children to dismantle weapons.

Miloš Zeman, the Kremlin´s Trojan Horse in Central Europe, has won a second presidential term. Jakub Janda from our Kremlin Watch Program described his journey to the hands of the Russians for the Observer.

An American is visiting the Soviet Union. He’s taking a train from Leningrad to Kiev and listening to his handheld radio when a Soviet man leans over to talk to him. “You know, we make those better and more efficiently here in the Soviet Union,” he says. “Oh?” Says the American. “Yes,” the Soviet man responds. “What is it?”

A debate about the objectivity of Euronews, a news website that receives €25 million per year from the European Commission, has developed after the portal published a report describing lessons given by the Russian Army to Crimean children as young as 12. The project was intended as a recruitment drive, with children learning how to dismantle and diffuse bombs and mines. The original article includes several enthusiastic quotes from participants and fails to mention that Crimea has been illegally annexed by Russia. The following day, the article was updated with the addition of a single sentence about the annexation and attendant sanctions. The update came after the Ukrainian Ambassador to the EU expressed his discontent and even shock in a letter to the European Commission.

New unit against disinformation to be established in the UK

The Guardian reports that the government of the United Kingdom plans to establish a national security communications unit with the goal to combat disinformation operations. This idea has been a part of a wider review of the UK’s defence capabilities. “We are living in an era of fake news and competing narratives. The government will respond with more and better use of national security communications to tackle these interconnected, complex challenges”, the spokesman of the Prime Minister said.

The EU should review the list of Russian oligarchs under sanctions

The US envoy on the Ukraine conflict, Kurt Volker, encouraged the EU to follow the US plan to review the list of sanctioned Russian oligarchs. According to him, “Russia is not changing its position at all, which is why we need to be adding to the cost that Russia faces.” He suspects the blacklist is going to be extended significantly and this process should continue until Russia “gets serious about trying to bring about peace in Ukraine.”

This follows reticence on part of the Trump administration to adhere to the requirements stipulated by Congress last year to penalize Russia for its election meddling. The administration announced new sanctions last week pertaining to Russia’s annexation of Crimea, which target 21 individuals and nine entities including Russian government officials and companies involved in projects on the Crimean peninsula. Secretary of State Rex Tillerson has emphasized that the US refuses to acknowledge Russia’s unlawful occupation of Crimea.

We wouldn’t be too surprised to learn if, somewhere one the Kremlin’s premises, there is an office responsible for producing different versions of history and altered narratives. This week it’s for the Romanians about their “Carpathian genius”. Although there are many Romanians deserving this title, Vzglyad writes about Nicolae Ceausescu. The one who “fell a victim of the first color revolution” and the “last stalinist of Europe”. The one who told Gorbachev “Rather, the Danube will flow backwards than the perestroika will take place in Romania” and “rescued Romania from the IMG debt slavery”. The one who “fell victim to lies and manipulations in 1989” and whose glory Vzglyad is now trying to resurrect.

We sometimes wonder, is it national penchant to whitewash dictators, or is it because Russians currently have their own…?

RT gets nervous over Facebook’s fight with fake news

Ever since Facebook announced that it has refreshed its NewsFeed algorithm and decided to add a “disputed” tag on fake news stories, RT can’t get over the news that it will now become a bit harder to disseminate fake and misleading content. “Simply creating an arbitrary list of whose websites can and cannot be viewed on Facebook or considered ‘news’ is normalizing censorship instead of informing individuals“. In another RT article that appeared a few days after Zuckerberg broke the news, RT took its frustration further. RT writes about the addictive nature of social media and quotes an American entrepreneur who suggests that social media should be regulated like the tobacco industry. “I think you’d do it exactly the same way you regulate the cigarette industry. Here’s a product, cigarettes, they are addictive, they are not good for you. Maybe there is all kinds of different forces trying to get you to do certain things. There are a lot of parallels”. 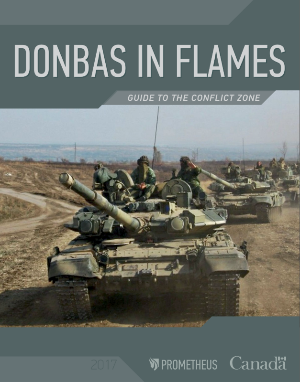 Donbas in Flames: Guide to the Conflict Zone

As far as Russian activities are concerned, recent focus has mainly been on the West, which has overshadowed no less concerning issues such as the war in Donbas. For this reason, and due to its long duration, it is easy to lose track of what is going on in the region. For an in-depth understanding of the conflict, we recommend this guidebook. Written by a group of authors with miscellaneous backgrounds (investigative journalists, political scientists, geographers and historians), the short book offers a thorough yet concise summary of the war in Donbas, taking into account various aspects of the conflict.

Before engaging in an analysis of the war itself, the authors provide a detailed geographical, historical and socio-economic assessment of the Donbas region, which illuminates context that average media coverage often lacks. Later, the book contains a timeline of the conflict, beginning in February 2014. Considerable space is also devoted to the lives of civilians living in the war zone and to differences in how the war events have been covered by Ukrainian, Russian and Western mass media, and on the Internet. Finally, you can read about the tactics and equipment used by Russia in eastern Ukraine.