“Normal course of diplomacy”: The Trump administration has scheduled talks to be held in late January between the head of US forces in Europe, Army General Curtis Scaparrotti, and the chief of the Russian armed forces and deputy defense minister, General Valery Gerasimov.

The Senate Intelligence Committee, which is investigating Russian meddling in the 2016 election, is expected to provide electoral security recommendations within one to two months. The urgency of ensuring protections for upcoming elections resonates strongly in Europe as well.

The French Conservatives consider Macron’s law on “fake news” dangerous for press freedom. Mainstream media seem to share the president’s view that disinformation targets democratic principles in the country, but believe Macron is entering dangerous territory with his initiative. The Times reports.

In an article for the US Military Review, Lt. Cols. Jon Herrmann and Brian Steed present a virtual reality model for describing “the information battlespace in physical terms”.

“Words and Wars” (Internews) offers an overview of the Ukrainian experience of dealing with Russian propaganda and information warfare.

“Evergreen MH17”: Bellingcat carefully analysed most of the claims made by Kremlin authorities and pro-Kremlin media outlets. Here they offer a summary of these narratives and why they are false, with a special focus on the position currently held by the Kremlin.

Stalin is giving a long speech at an event, naturally in front of a huge audience. While he’s in full flow, somebody near the front of the hall sneezes. Stalin stops and surveys the crowd.

“Who sneezed?” he asks. Deathly silence.

“Very well,” says Stalin. “First row, stand up!” Everyone in the first row stands up. “Guards! Open fire!” A few seconds later, the entire first row of the audience is lying in bloody heaps on the ground.

“Now, who sneezed?” Still not a whimper. “Second row, stand up! Guards! Open fire!” The second row writhes and breathes its last.

“Wait! Wait!” From the sixth row a man rises, shaking so hard with fear that he can barely stay on his legs. “Please! Comrade Stalin! It was me. I sneezed.”

Stalin fixes his eye on the wretch. The entire audience watches, paralysed. “You sneezed?”

The chairman and vice chairman of the Senate Intelligence Committee – one of three congressional committees investigating Russian meddling in the 2016 election – have stated that they expect the committee to provide electoral security recommendations to states in the next one to two months. According to the vice chairman, Mark Warner (D-VA), the urgency of ensuring protections for upcoming elections (beginning with congressional primaries in March) led the committee to release these recommendations early, before completion of the full investigation. The chief of the CIA, Mike Pompeo, has accused Russia of seeking to interfere in this year’s congressional elections – a charge that Russian officials have of course vehemently denied.

The Senate Intelligence Committee is likely to be the only committee to produce a bipartisan final report; the House Intelligence and Senate Judiciary committees have been fraught with partisan tensions that render bipartisan conclusions unlikely.

Renewed talks to be held between US and Russian military officials

The Trump administration has scheduled talks to be held in late January between the head of US forces in Europe and Supreme Allied Commander Europe, Army General Curtis Scaparrotti, and the chief of the Russian armed forces and deputy defense minister, General Valery Gerasimov. This will be the first such get-together between top-level US and Russian military officials since such meetings were banned by the Obama administration in 2013, following Russia’s interference in Ukraine and support for pro-Kremlin Ukrainian president Viktor Yanukovych.

The renewed talks are being described by the State Department as a “normal course of diplomacy”. Topics of discussion are to include America’s $41.5 million sale of lethal defense weapons to Ukraine – a sore spot for Russia – and mutual accusations regarding violations of the 1987 Intermediate-Range Nuclear Forces Treaty.

In an article for the US Military Review, Lt. Cols. Jon Herrmann and Brian Steed present a virtual reality model for describing “the information battlespace in physical terms”. Given the simultaneously abstract and dynamic nature of the extant information environment, which renders its features and challenges often difficult to grasp, Herrmann and Steed advocate the use of a simulation model that can help military actors map the information landscape and formulate appropriate counterstrategies.

“Regardless of the specific metaphors, commanders are finding the informational environment difficult to grasp and even more difficult as a battlespace. Using a model that explains the information battlespace in physical terms could enrich understanding. Granted, no model can depict every aspect of a complex environment. Misuse or misunderstanding of a model can lead a commander astray. However, if the limitations of the model are well understood, there are lessons to be learned. Regardless of the model used, America has to get a better understanding of the information battlespace. If this model can advance that cause, then it is worth considering.”

‘Repetition is the mother of every lie’ – this is a fundamental tenet of propaganda strategy. It is also especially handy to repeat the same lies in the most unexpected places. For example, drawing parallels between regime change in Iran and … reiterating that Russia didn’t meddle in American presidential elections: unexpected? Not in the world of propaganda, where you use every occasion to attack your enemy and accuse it of the very thing it accuses you: “As US-based social media companies crack down on dissent at home in the name of fighting phantom ‘Russian meddling,’ Washington seeks to leverage them for regime change in places like Iran. The laughable irony of this is that American politicians and news media have been banging on for over a year with allegations of Russian meddling in US internal affairs, notwithstanding that no credible evidence has been provided for these American claims”.

Moscow has exploited the refugee crisis many times in order to create an atmosphere of fear and exacerbate fault lines between European states. No wonder, then, that speeches by European politicians that follow this line are warmly welcomed by Russian media. RT quickly followed up an interview Viktor Orban gave to German newspaper Bild about his attitude towards refugees. RT selected a few of Orban’s quotes, such as: “Refugees in Europe are just ‘Muslim invaders’ and economic migrants seeking better lives,  the large number of Muslims in the EU had led to the appearance of ‘parallel societies’”, his criticism of Merkel’s open-door policy: “I’ve never understood how chaos, anarchy and illegal border crossings are viewed as something good in a country like Germany, which we view as the best example of discipline and the rule of law”, and his earlier quote that refugees are “a Trojan horse for terrorism”. Indeed, it is good to have high-profile friends who will speak according to your narrative lines.

Macron’s plan for a law against disinformation under scrutiny

We wrote last week that the French President has announced an upcoming law against “fake news”, which would make transparency rules before elections stricter and enable judges to remove disinformation content. But Macron’s opposition is less enthusiastic about this move, The Times reports: the French Conservatives consider Macron’s plan “dangerous for press freedom”. French mainstream media seem to share the President’s view that disinformation seeks to undermine democratic principles in the country, but believe that Macron is entering dangerous territory with his initiative. Predictably, the strongest opposition came from Macron’s presidential rival and Kremlin favourite, Marine Le Pen: 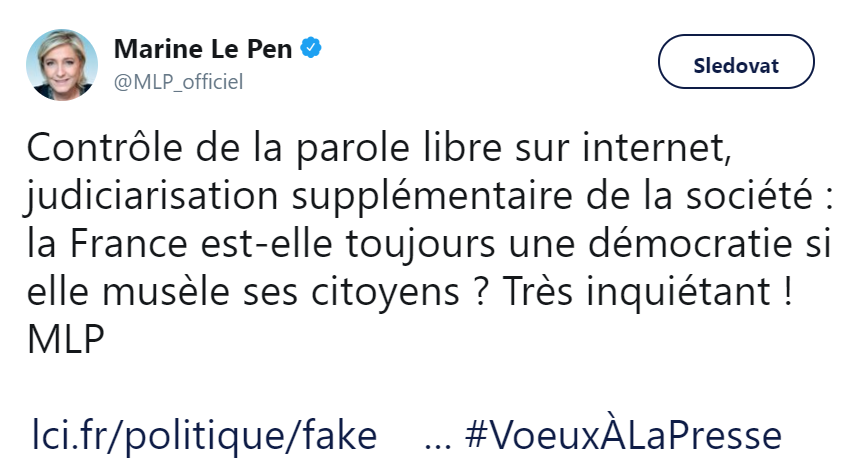 Russia tries to hold on in the Balkans

Coda Story presents a brief summary of the book by Dimitar Bechev, Rival Power: Russia´s Influence in Southeast Europe. It is contextualized with the recent giveaway of Russian ageing military aircraft to Serbian authorities, who would probably prefer purchasing Western weapons but cannot afford them. In this way, the Kremlin is trying to improve its public perception in Serbia. According to the author, Vladimir Putin has also had a relative PR success in the country, achieving a sort of a “cult status” among portions of Serbian society. But without a clear strategy – and considering that the West is highly unlikely to abandon the Balkan region – he will have a tough job holding on to his popularity.

The downing of MH17: Best of

Western investigations of the MH17 crash, notably that conducted by the Dutch government, have repeatedly and definitively concluded that a Russian-made BUK missile, launched by Russian forces or pro-Russian separatists, was responsible for the tragedy. There has been no variation in these findings. The same does not apply for the Kremlin’s narratives about the crash, which have changed several times over the past year and typically rely on presenting contradicting evidence, highly altered digital images, or fabricated witnesses to instil doubt about the official (Western) version of events. Investigative reporters at Bellingcat have long been working to expose these lies, carefully analysing claims made by Kremlin authorities or pro-Kremlin media outlets. Here, they offer a summary of all these narratives and why they are false, with a special focus on the Kremlin’s current position.

This week, we recommend a piece that is longer than usual, but that we guarantee is worth your time! Words and Wars is a book by a group of Ukrainian authors that provides an overview of the Ukrainian experience of dealing with Russian propaganda and information warfare. Since Ukraine experienced the impact of Russian information warfare earlier and on a larger scale than other European or Western states, understanding Russian tactics and learning lessons from countermeasures employed by Ukraine can be very useful for anyone facing the Russian threat today. 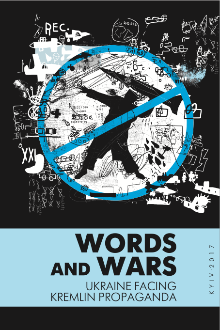 The book is divided into seven chapters focusing on different aspects of the Ukrainian experience, and even features a handy overview of existing research into the topic of Russian propaganda and disinformation. If you just want to learn about the to-do’s in fighting Russian information warfare, you can find extensive recommendations for both the international community and Ukraine in the last chapter.

The authors present the following key messages: Russian propaganda has deep roots, which can be traced back at least to Soviet times, and “post-truth” strategies are not the invention of the Putin era. However, the propaganda of today is different in various aspects from the propaganda of the past. It does not provide its own narrative but rather tries to show that Western narratives are flawed. Moreover, the authors point out that that Russian propaganda goes further than fake news; it uses a specific discourse that has a clear semi-militarist tonality and is aimed at winning a war.