For those seeking to understand the state of play in the Czech Republic, we have prepared a brief report published by the Warsaw Institute. The goal of the report is to identify the main channels of the Kremlin’s hostile influence, their effectiveness, and the most relevant responses from the government and the civil society.

In his article for New Eastern Europe, Jakub Janda argues that the Kremlin was not actively interested in supporting Czech political parties before the parliamentary elections, but that we can expect interference attempts in the presidential elections next year to help President Miloš Zeman win a second term. According to Jakub, the President “is the pivot patron of Russian influence in the country”.

According to John Schindler (Observer), Polish counterintelligence is conducting exemplary work while countering the Kremlin’s hostile influence operations. Schindler praises the Internal Security Agency for publicly deporting Dmitry Karnaukhov, who officially worked as an academic at the Russian Institute for Strategic Studies in Warsaw, but in fact was spying for the Russian Foreign Intelligence Service (SVR).

Recent technological advancements have enabled actors using hybrid threats to both attain a wider reach and develop a wider set of tools. In order to successfully counter these innovations, states must have sufficient know-how. Read the  report by the European Centre of Excellence for Countering Hybrid Threats.

While we appreciate the latest statements made by Boris Johnson (who called it a scandal to appear on RT and thus legitimate such propaganda), London has to be more clear and consistent about its Russia policy. It was revealed that, prior to the Brexit referendum, the Democratic Unionist Party received an unprecedented donation of £425,000 from the Constitutional Research Council for the Leave campaign. This has still not been resolved. Open Democracy is continuously investigating the true origin of the mysterious gift. According to their last report, all the key figures they approached so far have denied their connection to the donation.

“OK, now 25 years of life are guaranteed for you!”

Russian trolls claiming to be behind the site BlackMattersUS, which has recently been exposed as a Russian propaganda operation, have announced that they are planning a Reddit ‘ask-me-anything’ and have contacted several reporters asking them to submit questions. The website of BlackMattersUS has since been transformed into an advertisement for the AMA:

It is unclear whether the AMA will in fact take place, but it appears to be scheduled for October 30. The reporters who have been contacted have all prominently covered news relating to Russia’s disinformation and hostile influence efforts. Though it remains to be seen whether the AMA proceeds, it is clear that the trolls are performing another PR stunt to remain visible and continue polluting the information space.

How Russia uses American businesses to steal US military tech

Amidst the continuing discussion about Russia’s disinformation campaign, it’s essential to remember that the Kremlin deploys many different approaches in its foreign influence efforts. A recent example is the indictment of two women in the US who helped smuggle military-grade technology to Russia via a US-based company called Arc Electronics that falsely claimed to manufacture traffic lights. According to case prosecutors, “specific correspondence recovered during the course of the investigation revealed that the Federal Security Service, Russia’s domestic intelligence agency, as well as Russian military entities, were the end users of some of the microelectronics exported by Arc.” Read the full saga at The Daily Beast.

Two top Republicans in the Senate, Bob Corker and John McCain, have vowed to determine whether the White House is purposefully stalling the implementation of new sanctions against Russia, which were mandated to go into effect on October 1. White House officials claim there is “no deliberate hold-up” and have blamed the delay on slow proceedings by the State Department.

Who is more human?

The Russian Ministry of Foreign Affairs has once again slammed ‘the so-called allies’ in the Syrian conflict. Moscow gave the US-led anti-ISIS coalition slight kudos for capturing Raqqa (October 22) but this success was immediately discredited by claims that the “the terrorist leaders left the city several months ago and were followed by convoys of ordinary terrorists. Raqqa was taken by units of the Syrian Democratic Forces whose backbone is formed by Kurdish volunteers. The United States and other members of the coalition provided them with active air and fire support”. These missile strikes were described as indiscriminate by the Russian FM and, according to Moscow, resulted in the loss of thousands of lives. Raqqa’s population of half a million decreased to no more than 25,000. “This is the truth behind the assessments we hear from our Western colleagues”.

Moscow is once again disappointed in the Western media for carrying out a campaign about a famine in the Eastern Ghouta suburb of Damascus (de-escalation zone), rather than properly covering the situation in Raqqa. Russia blames the West for playing games and for “shamelessly using humanitarian issues for political goals to increase unilateral pressure on the Syrian government and also on Russia as it helps it combat terrorism”.

Shall we talk about the Russian ‘humanitarian convoys’ to eastern Ukraine?

Maria Zakharova, spokeswoman of the Russian FM, devoted the majority of her remarks to Ukraine during her last briefing. If you follow us regularly, this news will not come as a surprise. Apparently, the issue keeping her awake at night is the infamous education law (covered in our past issue). Kiev´s attempt to assure its neighbours that their compatriots and related ethnic groups will not face any linguistic problems in Ukraine was categorically dismissed by Russia. Moscow claims that all these measures are taken exclusively against Russian speakers and the Russian language. Zakharova no longer sees European colleagues chuckling at Moscow when Russia speaks about the really serious nationalist influence that is rapidly growing in Ukraine. “In the past, they laughed at us, saying these are our inventions. These are not inventions. Kiev moved to the active introduction of nationalistic decisions.”

We recommend reading the briefing as it provides an exhaustive (and exhausting) explanation of how Russia feels about Ukraine, which it is described as “the Middle Ages at their worst”.

In another interesting statement that Moscow could not ignore, Britain’s Foreign Secretary Boris Johnson didn’t miss his chance to call out Russia Today (thank you!). Johnson called it a “scandal” that members of the Labour Party appear on RT. “If we study the output of Russia Today and consider the state of the press in Russia at present, we see that it is an absolute scandal that Labour Members should be continuing to validate and legitimate that kind of propaganda by going on those programmes. I am assured by my ministerial team that none of them does so,” Mr Johnson said.

We understand that this is a political game as Conservatives also appear on RT, in fact so does Johnson’s father. But raising this issue and public shaming is necessary. Johnson will be in Moscow soon so we will see how he deals with Russian media in person.

We believe it is a pure coincidence that this car was parked in front of our colleague’s place. But we also read Catch 22. “Just because you’re paranoid doesn’t mean they aren’t after you.” – Joseph Heller 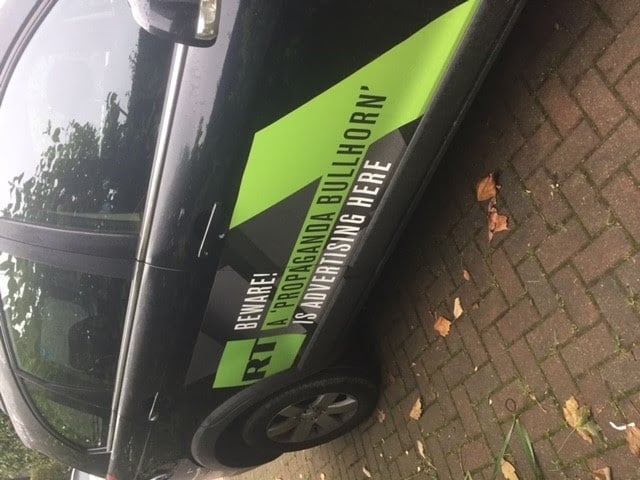 Although disinformation in the media doesn’t appear to have had a significant impact on Germans during the recent parliamentary elections, the Berlin-based think-tank Stiftung Neue Verantwortung concluded in a recent study that it may have reinforced the views of supporters of the far-right Alternative for Germany. According to their research, AfD voters were more receptive to false stories and relied more on social media for information.

It has been revealed that, prior to the Brexit referendum, the Democratic Unionist Party received an unprecedented donation of £425,000 from the Constitutional Research Council for their Leave campaign. Open Democracy is still investigating the true origin of the mysterious gift. According to their last report, all the key figures they approached so far have denied any connection to the donation or publicly expressed their opposition to Brexit, apart from banker Hanry Angest, who refused to comment. There is no evidence suggesting he was actually involved. The whole issue raises questions about the transparency of political financing in the United Kingdom.

Disinformation and extremism in Slovakia

Disinformation outlets helped the Slovakian far-right People’s Party become the third most popular in the country, says Michael Colborne in his article for Coda Story. Alarmingly, the L’SNS includes several neo-Nazi members, has 14 seats in the Slovakian Parliament, and is largely supported by the youth. Currently they are predicted to have more success during the regional elections.

According to John Schindler, Polish counterintelligence is conducting exemplary work while countering the Kremlin’s hostile influence operations. In the Observer, he praises the Internal Security Agency for publicly deporting Dmitry Karnaukhov, who officially worked as an academic at the Russian Institute for Strategic Studies in Warsaw, but in fact was spying for the Russian Foreign Intelligence Service (SVR). Schindler warns that Karnaukhov might reappear in another Western country once the attention goes away.

Recent technological advancements have enabled actors using hybrid threats to both attain a wider reach and develop a wider set of tools. In order to successfully counter these innovations, states must have sufficient know-how. This paper by the European Centre of Excellence for Countering Hybrid Threats is a good start.

Response mechanisms to hybrid threats are, in most cases, based on solid ground-work done on a national level. Nations must understand the threats they are facing and the vulnerabilities they have. In order to achieve that, it is necessary for states to regularly undertake national vulnerability assessments, where a threat actor’s goals, means, and tools are compared with unique, country-specific vulnerabilities. Furthermore, scenario-based exercises and up-to-date situational awareness are also important. Such activities are crucial for developing a comprehensive whole-of-society security approach.

Nevertheless, to be truly resilient, individual countries must engage in networked cooperation. Without well-functioning information sharing, a coordinated and well-targeted response cannot take place. The need for regional cooperation can also be seen, for example, in the protection of critical infrastructure, which in most cases span across national borders. Moreover, infrastructure is mostly under civilian and often private ownership, which is one of the reasons why military defence alone is insufficient and why states must support the preparedness and resilience of civilian sectors as well. A good example of such regional cooperation is the Baltic Sea region, where the EU-NATO workshop on hybrid risk assessment took place recently – you can find the key takeaways from it in the paper. 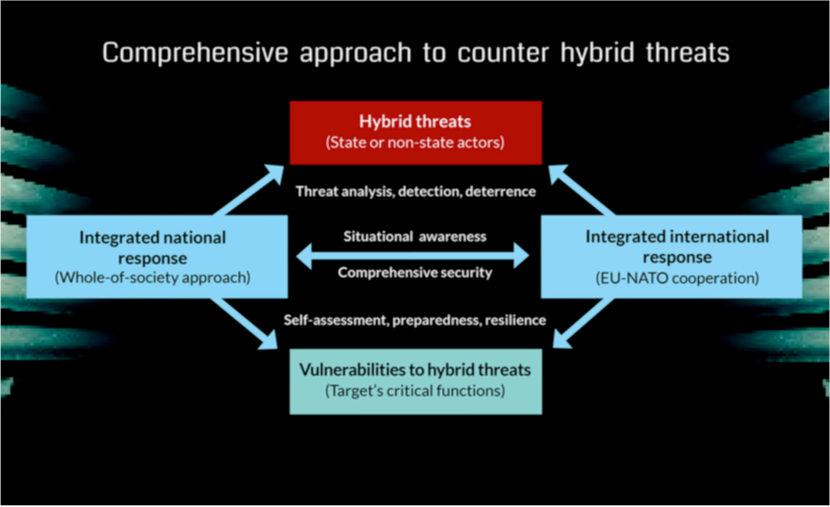