Q: Why are former Stasi members the best taxi drivers in Berlin?

A: Because all you need to tell them is your name – they already know where you live.

A remarkable collaborative investigation by journalists from Re:Baltica, Postimees, and BuzzFeed has brought new revelations about the Kremlin’s practices of spreading disinformation. Rossiya Segodnya, the state-owned Russian news agency that replaced RIA Novosti in 2013, secretly established “Baltnews”, three seemingly-independent news servers in the Baltic countries to pump out pro-Kremlin content. The servers were financed via shell companies in Serbia and Cyprus. The journalists obtained copies of Skype chats and other documents as part of a criminal probe into a key individual working for the Kremlin in Estonia. The three “Baltnews” sites, launched in 2014 and hosted in Latvia, Estonia, and Lithuania, used the services of Russian troll factories in return in order to spread pro-Kremlin disinformation narratives on social media.

How the Kremlin uses “angry young men” to undermine democracies

Michael Carpenter, senior director at the Biden Center for Diplomacy, provides a thorough overview for The Atlantic of how Russian intelligence agencies seek to recruit angry young men and fringe group radicals from motorcycle gangs, fight clubs, and ranks of neo-Nazi football hooligans. These individuals are often susceptible to far-right views and attempts to create well-trained para-militant groups across Europe. These groups are then mobilized to protest against Western governments and undermine democratic institutions, such as in the cases of Ukraine and Montenegro.

Carpenter highlights that not only does the Kremlin retain a list of susceptible individuals who can be indoctrinated by disinformation operations from the infamous Internet Research Agency (the St Petersburg troll factory), but that these individuals can also be exploited to establish contacts with far-right populist movements and parties in Europe, such as France’s National Front.

“Russia’s manipulation of fringe far-right groups is part of a deliberate strategy to undermine Western democratic institutions. Russia’s trolls and intelligence services prey on social outcasts in order to radicalize them and recruit them to wage war on their countries’ liberal institutions. To do this, the Kremlin reinforces their belief that liberal democracy is rotten and cultivates their restless anger and propensity toward violence. In addition to stoking anger and resentment, the Kremlin also uses covert financing to bankroll their destructive agenda. These efforts occur both in person, via martial-arts studios and motorcycle clubs, and in the virtual world of social media, where they are largely hidden from law enforcement and the general public. The strategy for fighting against this radicalization will therefore have to meld together what is known about combatting domestic hate groups with an updated counterintelligence toolkit. Finally, the effort to identify, expose, and disrupt Russia’s manipulation of anti-democratic groups is likely to succeed only when it transcends national boundaries and involves active coordination among all democratic states susceptible to this particular form of malign influence.”

In a new article, StopFake.org describes how Moldovan civil society is fighting against disinformation. The article summarises how three leading initiatives in Moldova are working to counter disinformation campaigns, and also assesses the limitations of their approaches. For example, the portal StopFals analyses types of disinformation and offers rebuttals to disinformation cases, but does not have a significant impact on fostering better political responsibility and accountability, particularly among pro-Kremlin politicians, because it focuses narrowly on local content and fake news in domestic media. The article also discusses an innovative approach to fighting disinformation: an internet browser extension called TROLLESS which automatically identifies sources of manipulation in one’s social media feeds and tracks fake profiles that spread disinformation.

As Moscow and Washington trade verbal shots ahead of Assad’s expected offensive in Idlib, the last major Syrian rebel stronghold, Russian officials have taken extraordinary measures to justify their recent advance into the region. In what Russian news outlet Izvestiya reports as a response to an increased US footprint in the area, Russia deployed an unprecedented naval force to the Mediterranean Sea, the largest since entering the Syrian conflict. The Russian Defense Ministry’s Igor Konashenkov further alleged that “the United States keeps building up the cruise missile carriers group in the Middle East as part of preparations for another provocation in Idlib Province to be presented as an alleged use of chemical weapons.”

Though the Pentagon dismissed claims of US military buildup in the region, Russian state media and officials have worked overtime to deflect Western attention, claiming that militants, foreign-trained elements, or rescue workers from the oft-vilified White Helmets group are poised to stage false-flag chemical attacks – claims Russia has made throughout the conflict. Given Assad’s previous use of chemical weapons and the potential of a catastrophic humanitarian crisis in the wake of an Idlib offensive, Russia’s attempts at misleading international opinion merits careful attention.

Special Counsel Robert Mueller’s ongoing investigation into Russian interference has reached its third plea deal. Republican lobbyist W. Samuel Patten pleaded guilty last Friday to violating the Foreign Agents Registration Act for undeclared lobbying activities on behalf of Ukraine’s ‘Opposition Bloc’ party, in collaboration with two unnamed foreigners: a “Russian national” and a “Ukrainian oligarch”. Patten further admitted to illegally funneling $50,000 from the unnamed Ukrainian oligarch (alleged to be Opposition Bloc deputy Sergei Lyovochkin) to Trump’s Inaugural Committee in exchange for four tickets to the event, one of which was used by Patten himself.

Of particular concern, however, are Patten’s professional ties with the “Russian national” listed in the criminal information document, identified as suspected Russian intelligence operative and close associate of Paul Manafort, Konstantin Kilimnik. Kilimnik, who was earlier indicted alongside Manafort, co-owned Patten’s consultancy firm, through which Patten attempted to coordinate meetings between US and Ukrainian officials. In accordance with his plea deal, Patten agreed to cooperate with the US Attorney’s Office and Mueller’s Special Counsel, and if necessary, to testify in future proceedings and grand jury hearings.

Amidst the ongoing trade war between US and China, reports have emerged claiming that, contrary to the findings of the US intelligence community, Chinese-owned entities compromised former Secretary of State Hillary Clinton’s private email server. Conservative media outlet The Daily Caller issued a report detailing how, according to an anonymous intelligence officer, Chinese-linked elements had allegedly embedded malicious code in Clinton’s server, generating real-time email copies that were surreptitiously forwarded to a yet-unnamed Chinese company.

These claims, which were predictably recirculated on Twitter by President Trump, follow statements made by US Republican Representative Louie Gohmert, who in a July hearing asserted that officials from the Intelligence Community Inspector General came forward to the FBI with forensic evidence pointing towards Clinton’s emails being sent to an “unauthorized source that was a foreign entity unrelated to Russia”. These claims, however, have since been rebuked, with the FBI stating that it “….has not found any evidence the [Clinton] servers were compromised”.

Countering Information Influence Activities: The State of the Art

The Swedish Civil Contingencies Agency and Lund University have published a joint report on countering information influence activities, in preparation for the 2018 Swedish elections. The report discusses the difficulties of diagnosing illegitimate influence, seeing as it occurs at the edges of open and free debate. Influence activities typically target vulnerabilities in democracies, including those in the media system and public opinion, in order to influence individual cognitive processes. Furthermore, influence operations exploit cognitive biases such as confirmation bias (the tendency to search for information that confirms one’s existing beliefs), bandwagon effect (the tendency to believe something just because many people do), and availability bias (the tendency to judge the likelihood of an event by the ease with which examples come easily to mind).

The report details influence techniques ranging from disinformation to trolling to the use of humour and memes. An interesting tactic is ‘astroturfing’, where an influence operation manufactures false support for a political agenda. This can result in a ‘spiral of silence’ where those who feel their opinions are publicly accepted become more outspoken and those with non-conforming minority beliefs increasingly remain silent and become less audible in society.

Importantly, the report also assesses the limits of counter-strategies. As influence activities prey on the heuristic nature of the human mind, debunking measures may become counter-productive. Legal and ethical challenges contribute to these limitations as influence activities fall within the scope of fundamental laws on freedom of expression. Thus, inevitably, counter-strategies will always be playing catch-up. The report identifies ‘deepfakes’ as a major future concern – manipulated audio-visual material that is virtually indistinguishable from real material. 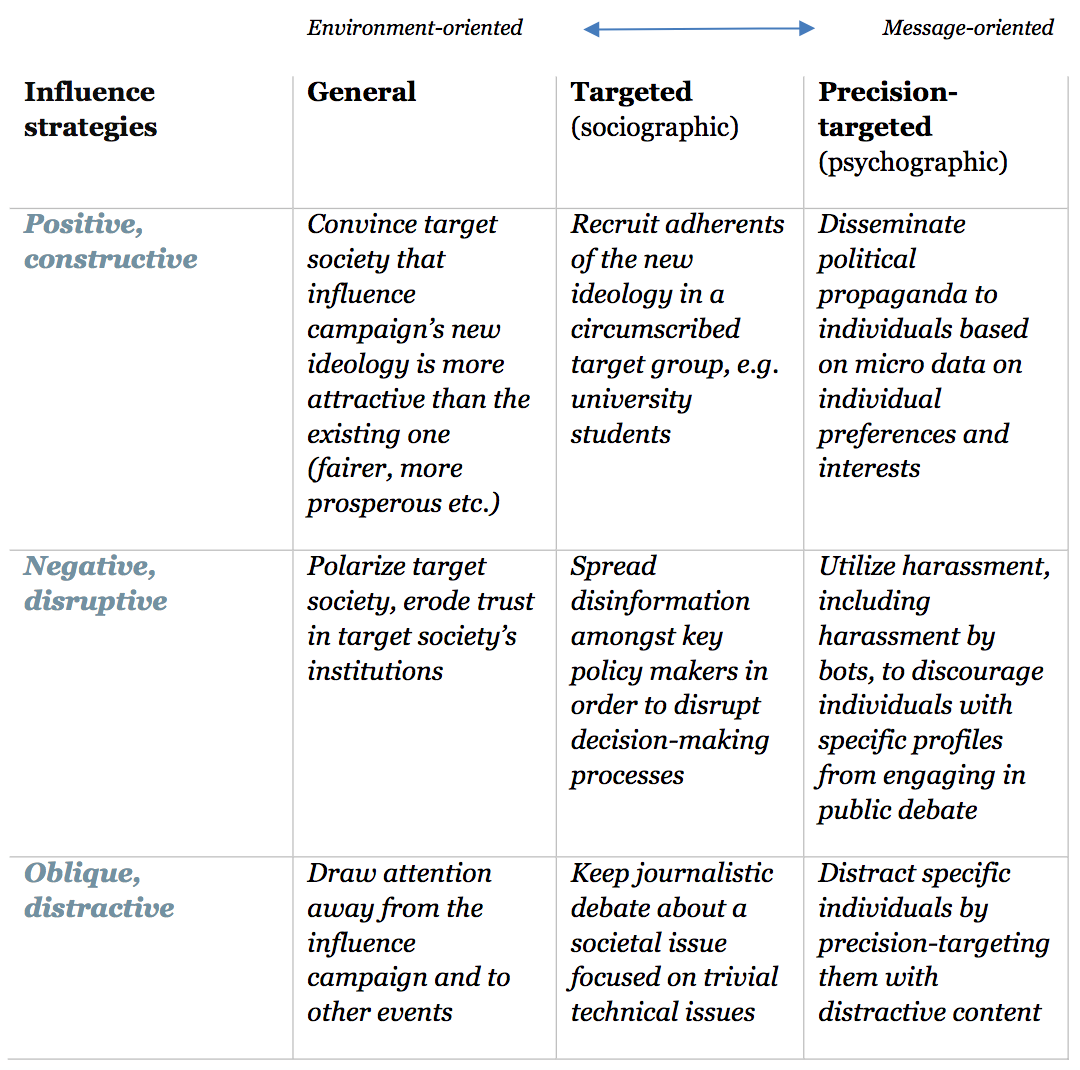