Russia is still not a priority threat for the European Commission when it comes to disinformation campaigns.

In order to maintain a good relationship with President Trump, Ukraine is freezing investigations into Paul Manafort’s connections in the country.

Read the main conclusions of the National Threat Assessment issued by the State Security Department of Lithuania.

Poruchik Rzhevsky is putting on his riding boots, about to take leave of a charming mademoiselle he met the previous evening. “Mon cher Poruchik”, she intones teasingly, “aren’t you forgetting about the money?” Rzhevsky turns to her and says proudly: “Hussars never take money!”

Is the new communique of the European Commission adequate?

The European Commission is finally calling out Russia for its information warfare, according to Radio Free Europe. According to the new communique, the EU appears to be putting its gloves on to start fighting back against mass online disinformation campaigns that are widely used by domestic and foreign actors to sow distrust and increase social tensions, resulting in serious security risks.

However, the communique is still lagging behind considering the fact that Russian military doctrine explicitly recognizes information warfare as its domain. Even though Russia is named in the document; the main recommendations are focused on the call for more transparency and accountability on social networks, establishing a European Code of Practice and support for media literacy. Among the proposed solutions is a plan to create an independent European fact-checking network and increase funding for the promotion of media freedom and media consumption awareness.

While Google has confirmed that in its attempt to prevent Russians from using the Telegram secure messaging app, Russia’s Roskomnadzor internet regulator is now blocking such a wide range of Google IP addresses that Gmail, Google Search and Android push notifications have reportedly been rendered partially unavailable in the country. Roskomnadzor wrote that, by allowing Telegram to continue using its IP addresses, Google has not met requirements to enforce the nationwide ban and that its own IP addresses would now be added to Russia’s national firewall. Google has told TechCrunch that it is “aware of reports that some users in Russia are unable to access some Google products, and are investigating those reports.” Google’s comments come on the heels of Roskomnadzor itself also announcing  that it had expanded its IP blocks to Google’s services.

At its peak, nearly 19 million IP addresses were blocked, with dozens of third-party services that also use Google Cloud such as Twitch and Spotify likewise falling a victim to the ban. Some believe that Roskomnadzor is playing a next level game with Telegram and the rest of the internet companies that are in various ways aiding and abetting it, spurred in part by Russia’s larger profile and how such blocks would appear to international audiences. “Russia can’t keep blocking random things on the Internet,” said Ilya Andreev, COO and co-founder of Vee Security, which has been providing a proxy service to bypass the ban. “Russia is working hard to make its image more alluring to foreigners in preparation for the World Cup,” which is taking place this June and July. “They can’t have tourists coming and realising Google doesn’t work in Russia.”

In a 250-page report released on April 27th, Republicans on the House Intelligence Committee concluded that no evidence was uncovered of the Trump campaign aiding Russian election meddling. According to the New York Times, the report only refers to “ill-advised contacts between campaign aides and Russian officials or their intermediaries.” It is being used as a tool to criticize Democrats and the Mueller investigation for being biased against the President. Democrats responded to the report with a 100-page document calling the Republican investigation a “whitewash” that failed to pursue important witnesses or lines of inquiry.

Among the shortcomings of the investigation that Democrats are pointing to is the failure to interview former national security adviser Michael Flynn, who pleaded guilty to lying to the FBI and is currently cooperating with the Mueller investigation.

The House committee is also being accused of ending their investigation early in order to paint President Trump in a more positive light. On Twitter, former CIA director John Brennan called the investigation “highly partisan, incomplete, and deeply flawed” and put together by a “broken House Committee”. President Trump praised the report, calling the ongoing investigations into Russian meddling a “witch hunt.”

In related news this week, the FBI Russia probe led by Special Counsel Mueller released a list of questions that it wanted to ask President Trump about key figures and events that are being investigated. The list includes questions about everything from former national security adviser Michael Flynn, to former FBI Director James Comey, to Attorney General Jeff Sessions. Trump reacted negatively to the disclosure, calling it “disgraceful.”

As confirmed by a State Department official on April 30th, the United States sent a supply of Javelin anti-tank missile systems to Ukraine. Ukrainian national troops will begin training with the weapons immediately, according to Ukrainian Defense Minister Stepan Poltorak. The delivery marks a symbolic victory for the Ukrainian government and sends a strong signal to Russia about Ukraine’s western backing.

Shortly after the Pentagon approved the sale of the anti-tank systems in March of this year, a Ukrainian anticorruption prosecutor made the order to halt investigations into former Trump campaign manager Paul Manafort’s decade of work with a pro-Russian political party in Ukraine. The move is being called an effort by the administration of Ukrainian President Petro Poroshenko to maintain good relations with Donald Trump. The New York Times quoted Ukrainian member of Parliament Volodymyr Ariev as saying: “In every possible way, we will avoid irritating the top American officials … We shouldn’t spoil relations with the administration.”

The investigation in Ukraine was looking into Manafort’s relations with former Ukrainian President Viktor Yanukovych, for whom Manafort was a longtime adviser. By late last year, a special prosecutor appointed to investigate corruption in Ukraine’s former administration had opened four cases related to Manafort’s role as a consultant to both Yanukovych and his pro-Russian political party. Just months before the investigations were frozen, the Ukrainian special prosecutor reached out to Robert Mueller regarding cooperation with their investigation by sharing evidence and leads. He received no reply.

In addition to freezing the cases, the Ukrainian government also allowed a witness of potential collusion between the Trump campaign and Russia to leave for Russia, putting him out of reach of the investigation. While Washington likely did not directly order the cases to be frozen, Ukrainian officials are reluctant to assist the investigation into Manafort’s connections in Ukraine to avoid offending a key ally while at war with Russia. Experts agree that the Javelin missiles will have little effect on the balance of fighting in the region.

The former chief of the National Security Administration, Keith Alexander, has raised $78 million in additional funding for his start-up, IronNet CyberSecurity Inc. The money is to be used to develop cyber defense tools such as the IronDome system, which will be used to protect critical US infrastructure from cyber threats. In March, the Trump administration accused Russian hackers of gaining access to networks in the energy sector. Systems like IronDome are gaining more support in an America that is increasingly concerned with its cyber security, especially from Russian, North Korean, and Iranian agents.

Moscow was initially rather cautious in describing the recent protests in Armenia, but quickly revealed its position after the resignation of Prime Minister Sargsyan. The name of the article, “What Russia lost in Armenia”, suggests an exciting read. The first sentences don’t disappoint: “Russia’s neighbourhood consists of countries that used to be part of its federation and gained statehood as a result of the disintegration of our big country. We aren’t even talking about Ukraine and Belarus, which are an organic part of the Russian World […] but about the Caucasus and Central Asia. […] Armenia’s change of the leadership doesn’t mean that Russia is ready to abandon Armenia or accept its hypothetical loss”. So, here we have learned that for Russia, the USSR is perceived as “our big country”, Ukraine and Belarus are non-negotiable components of Russia’s sphere of influence, and any notion of respecting the will and choice of other countries (their right to national self-determination) is off the table, unless of course Russia would potentially accept it.

Vzglyad also ‘subtly’ reminds us that protests can lead to civil war and state collapse (apparently for Moscow, the two go hand in hand).  That is why “Armenia needs an external power to guarantee its existence. Such power exists and it is Russia. No one else can replace it for Armenia”.

It’s no wonder that with such an attitude, Russia hasn’t lost anything in Armenia because, after all, “Russia cannot lose anything in Armenia. Not only because it will never leave this republic but because […] Moscow’s turning away from Yerevan will mean the end of the experiment with an independent Armenian state”.

In general, last week’s news make Russian journalists sure that Russia can only win from the international geopolitical changes that are underway. While the entire world was warmly welcoming the meeting of the two Korean presidents and hoping this woud lead to more positive changes on the Korean peninsula, Moscow was counting how much money it can gain from the possible unification, first of all, by building a pipeline to South Korea through the territory of North Korea, and secondly, by connecting the Russian trans-siberian railway to the Korean railway system. Journalists even counted how much money both Russian and Korean businesses might make from this deal.

Funnily enough, there’s a Russian proverb that sarcastically describes this premature attitude: “to divide the skin of the unkilled bear” – which is the version of the English idiom “to count one’s chickens before they are hatched”. 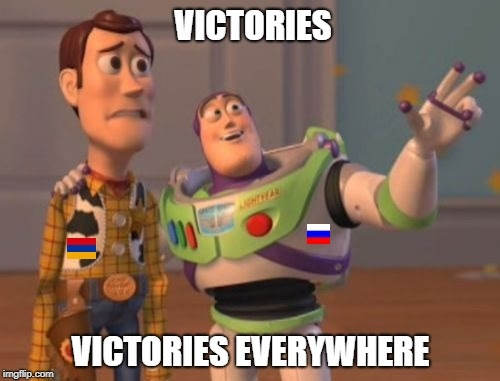 The State Security Department of Lithuania recently published its National Threat Assessment 2018 report, which identifies Russia’s aggressive stance as a major threat to Lithuanian national security. In the sphere of military power, the Russian army demonstrated its offensive capabilities against Lithuania and the Baltic states during its exercise Zapad-2017. Russian intelligence activities also pose a palpable threat, with Russian diplomatic personnel being used to execute intelligence activities. The report estimates that one-third of the Russian diplomatic mission in Lithuania is involved in intelligence activities, which particularly attempt to acquire unclassified but non-public information on Lithuanian armed forces, security institutions, and critical infrastructure. In 2017, three Lithuanian citizens who had been providing Russia with information for several years were arrested, two of whom had links to the Lithuanian Air Force. Furthermore, the Belarusian intelligence services have been active in Lithuania, mainly operating under orders from Russians.

Russia has also sought to combine information attacks and cyberattacks, illustrated by an example from 2017, when the Lithuanian news portal TV3.It was hacked and a fake story about the Lithuanian Defence Minister was spread. Moreover, a malware-infected email with a link to the article was sent out to media and state institutions, which aimed to infiltrate state and media institutions.

Russian media increased their focus on Lithuania in 2017, with many Russian journalists working unofficially in the country through tourist visas or entering the country via the Schengen visa area. They also started publishing more articles about the status of the Polish community in Lithuania in order to exacerbate tensions between Lithuania and Poland.