The Paul H. Nitze School for Advanced International Studies has published a call for scholars to apply for a postdoctoral fellowship focused on the topic of “The United States, Europe, and Global Order.” We encourage eligible and interested candidates to use this wonderful opportunity.

The French Minister of Culture has spoken about the plan for an anti-disinformation law in more detail. The goal of the bill is quite ambitious, but based on previous experiences with legislative measures against disinformation, we are being sceptical about the possible impact.

In the US, Democratic lawmakers are steadily pushing for more action to improve the resilience and cyber defenses of the US electoral system.

The US and Germany have offered to host two new NATO commands aimed at deterring Russian aggression in a major show of support for the alliance’s military build-up.

Stirlitz wakes up in a cell with no recollection of how he got there.

The door opens and a blue-uniformed NKVD policeman comes in saying: “You really should ease up on the vodka, Comrade Tikhonov!”

Will the French anti-disinformation law be effective?

We are closer to understanding the format of the new law against fake news proposed by the French authorities. According to the French Minister of Culture, its main goal is to respond rapidly to disinformation campaigns on the internet: “This new law will establish new responsibilities for the different media platforms, which will have to cooperate with the state and be transparent about their sponsored content. A judicial procedure will be put in place to allow rapid blocking of the dissemination of fake news once it has become manifest.” We still remain somewhat sceptical about taking legislative measures against disinformation. In many cases, including the German law targeting social media, the impact can be weak or even cause a political backlash. We will have to wait and see how the French law evolves in practical terms.

The Ambassador of the Republic of Lithuania, Rolandas Kriščiūnas, testified before the US Senate Committee on Appropriations – Subcommittee on State, Foreign Operations and Related Programs. He gave a detailed description of what the Russian Federation is doing to destabilize democracy in Lithuania and how his country is endeavouring to counter these threats. We strongly recommend reading through the testimony, especially the parts focused on Lithuania’s activities in the areas of disinformation and energy security (e.g., the national information influence identification and analysis ecosystem projects).

Freedom House has recently launched a new project in Moldova. The MEDIA-M project is funded by the US Agency for International Development and focuses on cooperation with civil society organizations and improving the media environment in the country. The organization provides small advocacy grants to local organizations and publishes policy briefs written by local researchers. Two of these memos, concerning media literacy and the political affiliation of Moldovan media organizations, have already been published on the Freedom House website.

House Democrats last week pressed the House Judiciary Committee to hold “immediate hearings” on cyber threats facing the national electoral system. In a letter to the Chairman, the Democrats wrote that the Justice Department “appears to have taken little – if any – action to secure our election systems” following Russian interference in the 2016 election. Democrats on the Senate Judiciary Committee are also urging hearings on the subject, and several also took to the Senate floor last Tuesday to rebuke the Trump administration for failing to enact sufficient measures to reinforce the defensive cyber capabilities of the US electoral infrastructure.

Congress has thus far failed to pass legislation that would specifically tackle election security, despite a slew of congressional reports and bill proposals addressing the issue.

NATO build-up: US and Germany plan to host new commands

In a major demonstration of support for NATO military build-up, the US and Germany have offered to host two new NATO commands aimed at deterring Russian aggression, specifically as part of the alliance’s response strategy to Russia’s illegal annexation of Crimea. While no concrete decisions have yet been made, the plans involve a North Atlantic planning and strategy command to keep shipping lanes protected from enemy submarines, and a logistics command designed to transport troops more quickly across Europe in case of a conflict.

In total, the two commands would require 1500 new personnel, which marks the first expansion of NATO in two decades, following the major phasedown in 2011. US Secretary of Defense Jim Mattis will be discussing the plans with other NATO defense ministers next week in Brussels, prior to the final decision being made in July.

Twitter’s laxity back in the spotlight (…again)

According to new reports, Twitter apparently left hundreds of Russian propaganda videos with millions of views on Vine, its video platform, for several months after it was obvious that they had been posted by a Kremlin-linked troll group. The finding yet again raises concerns about Twitter’s understanding of how it was and is exploited by disinformation actors, and what steps it plans to undertake to prevent such exploitation going forward. The company’s approach to identifying and removing content produced by Russian accounts seeking to influence the US election has repeatedly been criticized as lax. Twitter only removed the videos and accounts in question following an alert from CNN.

Russian media couldn’t have ignored the German coalition talks without their own commentary. Traditionally, even when Russians talk about foreign affairs, they talk about themselves first.

An article entitled “Power lust forced Merkel to respect Russian interests more” begins not with consideration of the potential composition of the future government, nor even by listing the provisions of the coalition deal. It begins with the statement, “Berlin toughens its position towards Kyiv and will continue to support Ukraine financially only if it will show progress in implementing Minsk agreement”. This is followed by the statement that, “in Germany, more and more people have stopped thinking about Ukraine as a victim of imaginary Russian aggression”. In just a few short sentences, an article discussing the internal developments of a foreign state squeezes in three self-serving Russian narratives: 1. Russia hasn’t invaded Ukraine; 2. Ukraine is responsible for the failure of the Minsk process; 3. German support for Ukraine is diminishing.

With Ukrainian sufficiently distorted, the author finally grants some attention to the coalition itself. Predictably, the SPD’s position towards certain issues and its role in the future government is highly praised. “Thanks to the SPD the coalition deal includes an important call for creating a unified space from Lisbon to Vladivostok. Europe can’t be built against Russia but only together with it”. A political scientist quoted in the article adds that: “The CDU wanted to have its Russian line toughened but Sigmar Gabriel fought like a lion so this intention failed”. Russians believe that Germany will seek to normalize relations with Russia in future.

Long being at the forefront of the Kremlin’s aggression, Estonia knows much about Russian tactics and prepares very good analyses thereof, such as the reports by the Estonian Foreign Intelligence Service (Välisluureamet), which are useful even beyond Estonia’s borders. The latest edition of the document ‘International Security and Estonia’ contains a handy summary of the current Russian domestic political and economic situation; you can read about Russian military and foreign policy, or learn about its influence operations. The publication not only presents factual analyses but also provides insight into how Russian actions may look in the future.

One of its main predictions is that despite the increasing awareness of the Russian threat in the US and around Europe, Moscow will continue its interfering and subversive activities in the West, perhaps on an even larger scale. These activities consist of tools of modern information and cyber warfare as well as classic intelligence operations (there is an interesting chapter in the paper devoted to how Russian intelligence services recruit foreigners on Russian territory). The threat of a direct Russian military attack on NATO member states is low; however, it is likely that Russia will seek to get involved in other conflict areas in the Middle East and/or Africa, mainly in order to irritate the West and demonstrate its power. 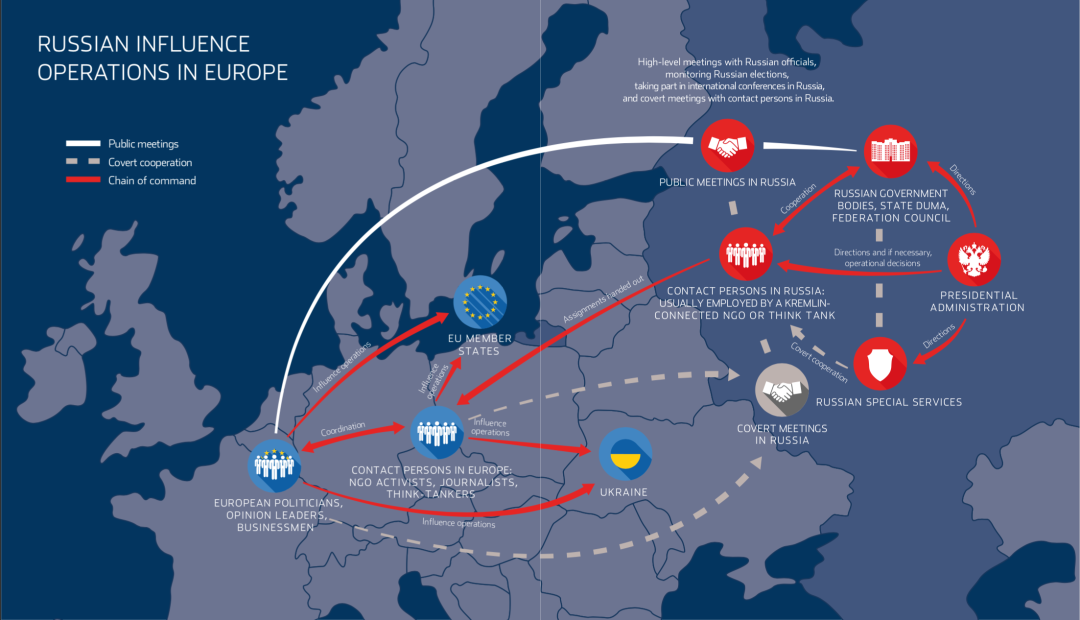