Twitter is banning the methods used by bots and trolls to spread false stories on the network. Twitter users will no longer be able to post identical messages from multiple accounts or use software to perform other simultaneous actions.

Do you have to ensure the cybersecurity of your political campaign but lack the resources? The Kennedy School’s Belfer Center for Science and International Affairs has prepared a Cybersecurity Campaign Playbook just for you.

Midnight in Petrograd… A Red Guards night watch spots a shadow trying to sneak by. “Stop! Who goes there? Documents!”

The frightened person chaotically rummages through his pockets and drops a paper. The Guards chief picks it up and reads slowly, with difficulty: “U-ri-ne A-na-ly-sis… hmm… a foreigner, sounds like! A spy, looks like…Let’s shoot him on the spot!”

Then he reads further: “‘Proteins: none, Sugars: none, Fats: none…’ You are free to go, proletarian comrade! Long live the World Revolution!”

A new deal to replace an old Soviet reactor at the Dukovany power plant is under consideration by the Czech Republic. The country is currently assessing different options. One possibility is to strike a bilateral deal with Russia and allow Rosatom to build the reactor in a similar fashion to Hungary’s PAKS II project. The European Commission is not fond of this option, but at the same time refuses to relax its rules on government bids. While the Czech government has not yet made a decision, President Zeman’s office has been lobbying hard for the Russian company to build the new reactor.

The Latvian banking sector has been troubled by money-laundering activities for years, as confirmed by the Organized Crime and Corruption Reporting Project, which included Latvia in an international money-laundering scheme known as “the Russian Laundromat”. Recent days have brought new accusations and Latvia’s anti-corruption authority arrested the Governor of the Bank of Latvia, Ilmars Rimsevics, for accepting bribes in order to facilitate money laundering for Russian entities. Shortly after, according to the Latvian Ministry of Defense, Mr. Rimsevics was targeted by intensive disinformation campaigns aimed at defaming him, which possibly (or indeed likely) originate from the Russian Federation.

Adapting to a new type of war

Dan Magaffee, Policy Director at Washington D.C.’s Center for Study of the Presidency and Congress, highlights the increasing threat of Russian and Chinese information warfare tools wielded against the West in a commentary for DefenseOne. He especially warns that military institutions cannot avoid this new type of conflict, and must rather adapt to it. His ideas are not only applicable for the United States, but for European countries as well. He writes, “Our organs of military, intelligence, and diplomacy must willingly engage in conflicts of narrative, ones in which we aggressively wield facts and the truth to counter the lies and deceptions of our adversaries.”

It’s been a busy week…

On the indictment of the 13 Russian nationals and three Russian companies:

Attending international conferences must be becoming increasingly uncomfortable for Russian Foreign Minister Sergei Lavrov. A few years ago, Ukraine was Russia’s only serious accuser, supported in this cause by a few allies. This year, by contrast, a primary focus of the Munich Security Conference was Russia’s meddling in the American election and Mueller’s indictment of 13 Russians. The Mueller indictment describes in detail the unprecedented Russian campaign to interfere with American domestic politics and the 2016 presidential election in particular.

When asked about the indictment, Lavrov merely commented that “Until we see facts, everything else will be just blather.” His unforgettable colleague Maria Zakharova was more outspoken in her Facebook post: “13 against billions budgets of special agencies? Against intelligence and counterespionage, against the newest technologies? Absurd? – Yes,”. With the investigation becoming more serious each week, it’s no surprise that the Russians are getting increasingly nervous… and less creative. We know that Russian propagandists are incredibly inventive in producing different deceptions to serve their twisted reality, but their coverage of the Munich conference was boring and predictable. “Rather than being a peripheral matter owing to its dubious claims, the Washington hobby horse of “Russian meddling” was given free rein in Munich. Instead of parsing the latest Russophobia with intelligent skepticism, the conference added fuel to the bonfire of warmongering”. There was also the typical and expected attack of the event itself: “Munich gathering descends into Russia-bashing nonsense & warmongering”. But with the allegations growing more and more serious, the Kremlin’s comments seem rather lame by comparison. It appears that they really expected to go unpunished forever.

We know this advice won’t be heard in the Kremlin, but it’s easier not to commit crimes rather than try to cover them up.

To this end, Defending Digital Democracy, a project of the Harvard Kennedy School’s Belfer Center for Science and International Affairs, created the Cybersecurity Campaign Playbook, which aims to provide basic building blocks for a cybersecurity risk mitigation strategy especially for campaigns that do not have the resources to hire professional cybersecurity staff. Simple and well-explained steps to securing campaign security are divided into two tiers: one represents the minimum level of security and the other a recommended level of security (which requires more money and staff). If you want to ensure the security of your campaign accomplish this easily, reading the Playbook is a must. 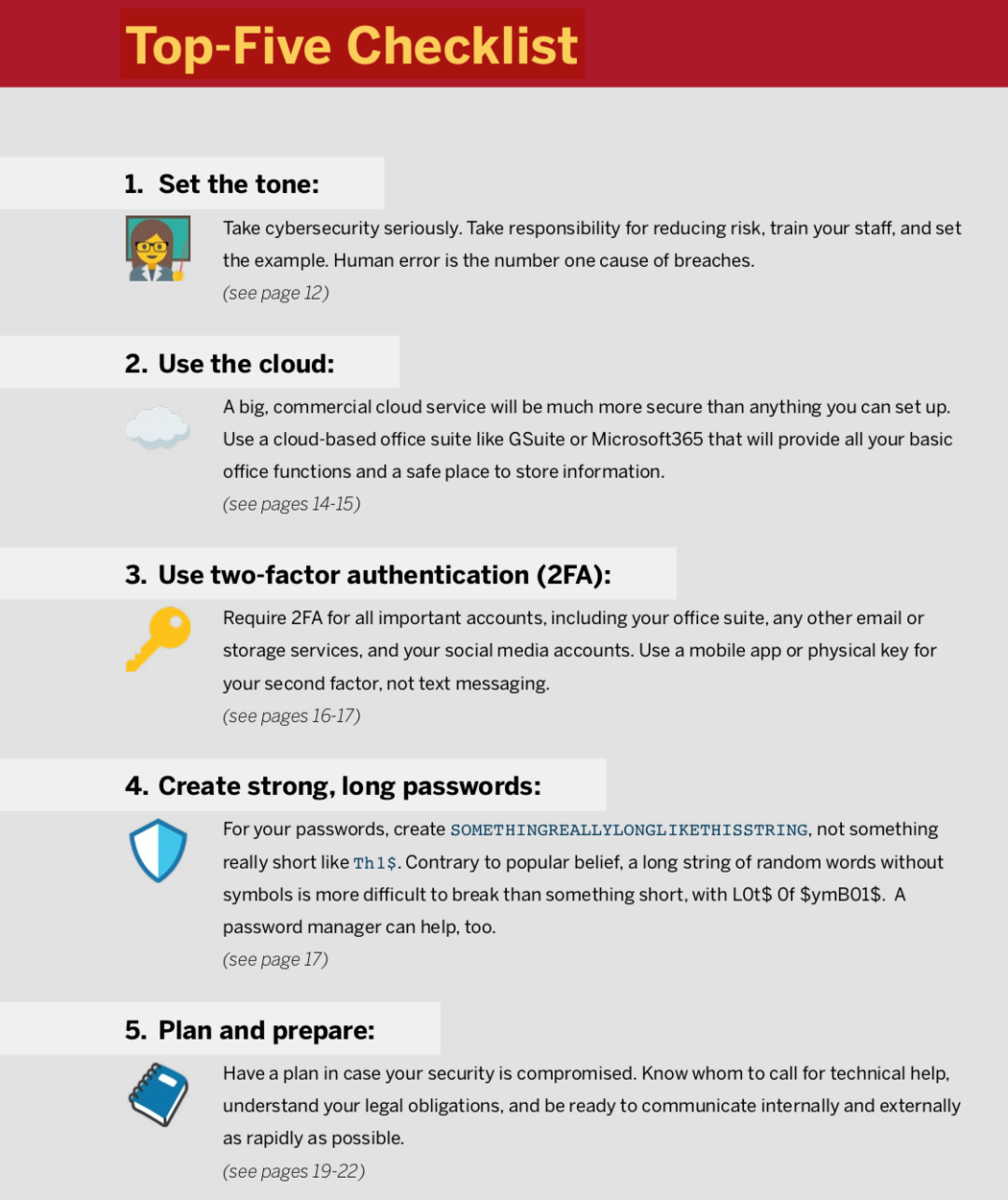