In their most recent article, Franklin D. Kramer of the Brent Scowcroft Center on International Security and Lauren M. Speranza of the Atlantic Council suggest to “create a hub to monitor Russian activity, similar to NATO’s new hub for the south. This could be housed in Brussels with a joint NATO-EU unit, or perhaps in conjunction with NATO’s Joint Forces Command Brunsuum. It could also be coordinated at the new Hybrid COE in Helsinki. This hub—and existing hybrid intel units—should incorporate the ever-increasing threat analyses from private companies and non-governmental organizations such as cyber security firms and digital analysis centers.”

According to Leonid Bershidsky, if Russian social media ads mirror the overall strategy of the Kremlin’s influence campaign, their diversity suggests that US intelligence assessments were misguided: the Kremlin and its trolls were not partisan and did not solely favor Trump. Rather, they exploited every possible socio-political rift, regardless of partisan cause – consistent with Russia’s playbook of influence in other countries.

Michael Carpenter, a senior director at the Penn Biden Center for Diplomacy and Global Engagement, concludes in his op-ed for The Hill that “tech companies must become aggressive about using algorithms and humans to root out bots and automated accounts. They must become more effective in screening for polarizing content to ensure that it not only meets hate speech guidelines but also isn’t being circulated by foreign patrons. They should partner with fact-checking and academic institutions to inform the public about what narratives the Kremlin is advancing and how they are targeting specific groups.”

Bedbugs appeared in the house occupied by the secretary of the region Party committee. The Party boss summoned an expert on insects and asked him how to get rid of bedbugs. The expert said, “The best way is to organize a collective farm for bedbugs. Then half of them will flee, and the rest will croak.”

Politico provides a sampling of the social media ads bought by Russia-linked entities that were released by the House intelligence panel. The ads focus on divisive social issues in the US including Black Lives Matter, Blue Lives Matter, the ‘Not My President’ movement, gun violence, and pro-Sanders/anti-Clinton narratives.

As Leonid Bershidsky writes in Bloomberg, if these ads mirror the overall strategy of the Kremlin’s influence campaign, their diversity suggests that US intelligence assessments were mistaken: the Kremlin and its trolls were not partisan and did not solely favor Trump. Rather, they exploited every possible socio-political rift, regardless of partisan cause. As Bershidsky argues, “The ads backed white nationalist as well as black causes. They often targeted Clinton before the election but switched to attacking Trump immediately afterwards. The ads against both were even visually similar.”

This strategy, of course, has long constituted the essence of Russia’s playbook. Bershidsky explains:

“The campaign was not tied to election timelines: It’s permanent, and it will go on while the U.S. and Russia are adversaries. In that sense, it’s no different from the Russian influence campaign in Ukraine. Elections and government changes that do nothing to alter the relationship between countries are just a useful background for propaganda, disinformation and sheer trollery because they politicize the audience and draw its attention to the divisive issues that propagandists exploit. Instability and confusion are the primary goals, and they’re easy to achieve on the cheap.”

Meanwhile, in a statement prepared for the US Senate Committee on the Judiciary, Subcommittee on Crime and Terrorism, Clint Watts of the Alliance for Securing Democracy explains that “within the Kremlin’s playbook, each social media platform serves a function […] in an interlocking social media ecosystem where Russia infiltrates, engages, influences and manipulates targeted American audiences.” Accordingly, he identifies five complementary social media functions that hostile actors will need to in order “to conduct effective full spectrum social media influence campaigns: reconnaissance, hosting, placement, propagation, and saturation” (see table below). 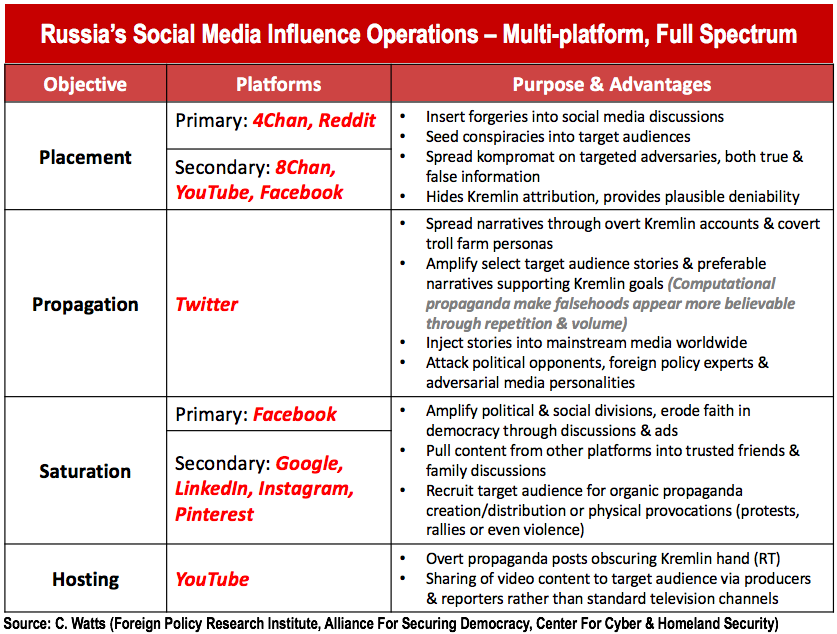 We also recommend this op-ed for The Hill that identifies the failures of social media companies to understand the scope and complexity of the Russian threat, and recommends three key responses:

Promising news from the State Department

Following questioning by US Senator Rob Portman, Steven Goldstein, the nominee for Under Secretary of State for Public Affairs has testified that, if confirmed, he will ensure that the State Department’s Global Engagement Center receives appropriate funding and fulfills its mandate “to effectively counter foreign disinformation and propaganda”. This follows corresponding confirmation of support in September from Eric Ueland, nominee for Under Secretary of State for Management.

Russia can’t get over Twitter’s decision to ban ads from RT and Sputnik. In a predictable fashion, a spokeswoman of the Russian MFA commented: “Twitter’s ban is evidence of its failure as a business and its absolute dependence on the US security establishment, which directly controls decision-making on Twitter, as we can conclude from its subsequent decisions”. The Russian MFA directs all its blame at Twitter and urges Twitter users to be alarmed by the censorious nature of the social media company. “Today Twitter has banned ads by Russian media outlets, namely RT and Sputnik, and tomorrow it may decide, seeking to suit the changing political situation, to label media outlets or businesses from any other country the “enemies of America”, said Mrs. Zakharova, a renowned defender of freedom of expression (that is, by the Kremlin).

According to the best traditions of Soviet storytelling, Vzglyad presented a story about the fifth International Forum for foreign Russians and Russian-speaking youth. As is traditional for Russian narratives, Vzglad draws no distinction between ethnic Russians and Russian-speakers in other countries and claims that all of them are members of Russkiy Mir. The aim of the Forum was to “spread the ideas of Russkiy Mir and fight against the Western propaganda that lies about the real life in Russia”.  As a successful example of these efforts, Russian journalists cite a Forum participant from Armenia, Goar Gumashan, who believes herself to be a part of the Russkiy Mir and observes with sadness that Armenian youth is seduced by the West and Europe. “Russian policies in Armenia should be improved”, Gumashan suggests. Notably, the main task the Forum participants see for themselves is the preservation of Russian language first and foremost in Ukraine. Evidently, the Kremlin has no intention to stop using Russian language and culture as a political instrument in foreign policy.

We already know how much Russia loves conspiracy theories. Last week, Russian state media actively commented on a new chapter in the endless story of how “Soros finances a fifth column”. This time, it is the list of 226 individuals from the so-called Soros list which was published by DCLeaks and brought to attention by Viktor Orbán. Russians claim that public figures who support ideas of equality, acceptance of migrants, Ukrainian integration into the EU, and critique of Russia are all bribed by Soros. Russia and Hungary believe it’s time to open Europeans’ eyes to the corrupt nature of their politicians. “Western democracy is just a facade that covers a feudal structure. No one takes interests of the people into account. Despite all its freedoms and liberties, Western societies remain as rightless, as in the Middle Ages”. Strange that the sentence wasn’t followed by “God bless Putin, God bless Russia”…

The Secretary-General of Council of Europe Thorbjørn Jagland

In October 2016, parliamentary elections were held in Montenegro, during which the coup attempt against Prime Minister Milo Djukanovic took place. During the investigation, one of the main witnesses (and also suspects) admitted to having been hired by a Russian intelligence officer to organize the overthrow of the government to stop Montenegro from joining NATO. Russia, of course, denounces the accusation as absurd.

Fourteen suspects in the case are currently under trial in Podgorica. On Nov. 1, Reuters and Radio Free Europe reported that one of the main suspects, identified as Montenegrin Ananie Nikic, is currently in Russia, which refuses to hand him over to the Montenegrin authorities. The Russian Prosecutor General’s Office said in a statement that it had rejected a request from Montenegro’s Justice Ministry to extradite Ananie Nikic, because he had been given refugee status by Moscow.

Counter-propaganda is a priority ahead of the Eastern Partnership Summit

During the EuroNest Parliamentary Assembly, MEPs and Eastern European MPs identified counter-propaganda as one of the priorities ahead of the Eastern Partnership Summit. According to a recent press release, they condemned “policies based on propaganda and misinformation”, as well as “Russian governmental efforts to discredit the EU and divide it and its partners by using state-controlled media”. They also called for setting up “EU-funded transnational networks of fact-checkers, investigative journalists and researchers” to fight disinformation campaigns.

The Council of Europe published a new report examining disinformation campaigns. It sets a framework for researching disinformation and presents 34 recommendations for technology companies, national governments, media organisations, civil society, education ministries and funding bodies. Among them, the publication calls for transparent criteria for algorithmic changes that down-rank content on social media platforms. It also suggests that governments should require transparency of advertising on Facebook and roll out advanced cybersecurity training.

Our reading suggestion for this week is military-focused and pertains to another field in which Russia poses a serious threat: electronic warfare, and specifically military activity involving the use of the electromagnetic spectrum. Russian disinformation and influence campaigns are far from being the only danger Russia poses to NATO and its allies, if the annexation of Crimea and events in eastern Ukraine are any indication.  Particularly in the Baltic countries, the Russian army causes serious concerns.

As stated in a report produced by the Estonian International Centre for Defence and Security, Russia has been making large investments into the modernization of its electronic warfare inventory since 2009, which means that the Russian army has already undergone significant changes and, undoubtedly, progress. As of now, NATO’s plans for the defence of its Eastern Flank are inadequate; the reason being that NATO does not take account of the full spectrum of Russia’s electronic warfare capabilities. It is therefore crucial that NATO develops an understanding of the extent of these capabilities and adjusts its planning accordingly. To learn more about Russian capabilities and the proposed solutions, have a look at the report.