The full report is available here.

Spain will create a joint cybersecurity group with Russia to analyse disinformation during the Catalan referendum.

A retired colonel in the Austrian army has been exposed as a Russian spy.

Are US-Russia relations likely to change after the midterm elections?

From the Institute for Strategic Dialogue: An analysis of international influence campaigns during elections in Sweden identifies smear campaigns in Poland and elsewhere

A man on Red Square shouts, “Brezhnev is an idiot!”

He is sentenced to 15 years: five for insulting the Soviet leader, and ten for betraying a state secret.

Spain’s foreign minister, Josep Borrell, has welcomed a Russian proposal to establish a joint cybersecurity group to analyse the dissemination of disinformation by state-owned Russian news outlets during the Catalan independence referendum. The official aim of the joint group is to ensure that disinformation does not damage bilateral relations or constitute a “source of friction” between Russia and Spain. Per usual, Russia has vociferously denied accusations of spreading disinformation during the Catalan referendum, although Foreign Minister Lavrov surprisingly admitted that “some Russian mass media go beyond the limits of their professional activity and create inadmissible interference in other countries’ issues.” Of course, he insisted that there is no evidence whatsoever of Russian government involvement.

Spain’s openness to this proposal is in stark contrast to the responses of other Western countries, where the Russian government’s attempts to interfere in national elections and spread disinformation have been generally met with vocal condemnation and, in the US, indictment of Russian individuals. In a disservice to broader European interests, Spain has instead opted for a softer stance towards Russia in order to avoid damaging bilateral relations. The Spanish foreign minister justified the decision on grounds that Spain has been amongst the countries hardest hit by sanctions against Russia, and that normalizing relations with Russia is in the national interest.

A Russian spy exposed in Austria

After Greece’s recent ouster of Russian spies, Austria follows with its own revelations of Russian intelligence activity. A 70-year-old recently retired colonel has been exposed as a Russian spy with the help of another European intelligence agency, the BBCreports. The colonel under investigation worked at the Austrian army’s control centre and had allegedly been paid an estimated 300,000 euros for information on high-ranking officers and artillery systems. According to authorities, it is as yet unclear whether this is an isolated incident. The revelations have cast a shadow over Austria’s relationship with Russia, and forced Foreign Minister Karin Kneissl (who infamously invited Putin to her wedding earlier this year) to cancel a planned trip to Moscow.

On fake news in Africa

BBC’s Beyond Fake News research project has found a number of interesting characteristics of disinformation in Africa. Amongst the findings is that people tend to overestimate their ability to spot fake news because emotions overcome rational reasoning about scrutinizing potential disinformation. This leads to a credulous attitude, described succinctly by an interviewee in Nigeria: “After watching the news I was touched, so I had to post it.” The project determined that in rural areas of Nigeria and Kenya where digital literacy is lower, information on the internet and Facebook is considered by many to be intrinsically “true”. Furthermore, the researchers also found that another common reason for sharing fake news on social media is social desirability, where individuals wish to be the first to share an eye-catching story in order to show their network that they are informed. Among nascent efforts to counter disinformation in Africa, a fact checking service called Africa Check has been established to offer a platform for verifying information.

Lessons from the front line

A new report from Chatham House examines Russian influence campaigns in Ukraine, Belarus, and Moldova, and outlines lessons for other countries based on their experience.  While Ukraine has long been considered Russia’s ‘laboratory’ for testing and refining different hybrid tactics and influence measures, Ukraine has proven remarkably effective at undermining many of these efforts through harnessing civil society and grassroots journalism.  Of the three countries, the report identifies Belarus as the most vulnerable, given its close economic ties with Russia and weak national identity. Moreover, any potential civic activism is dependent on state approval. Moldova’s chief vulnerabilities lie in low institutional trust and the country’s strong ties with the Russian Orthodox Church. The report urges that the best way to counter Russian influence is through citizen-centric initiatives that focus on education and participation.

Perspectives: The US midterms and Russia

Though the eagerly anticipated “blue wave” fell short of delivering a major political recalibration, Democrats nonetheless managed to seize the House of Representatives, thus earning a powerful check on the administration. The Senate, however, remains firmly in the GOP’s grasp – and indeed expanded majority rule, against the odds of historical precedent – signaling little rebuke to the Trump administration from the American electorate. If a divided political battleground remains in the elections’ aftermath, what do these changes mean for the Kremlin?

According to Russian officials, there are “no glowing prospects” of normalizing relations and “no reasons to expect a rapid improvement”.

Perhaps so. As Foreign Policy opines, the loss for Trump may be worse for Russia. Following Trump’s congressional setback, with Republicans surrendering the mighty gavel in the House Intelligence Committee, many point to the hope and promise of Democrats reopening Russia probes and sensitive investigations of alleged electoral collusion in 2016. Though the focus may rest on Democrats in exerting their majority power in the House, it is not to the exclusion of bipartisan cooperation. The threat of increased scrutiny may provide a greater imperative for Republicans, alongside Democrats, to elevate measures against Moscow’s malign actions, which are expectedto manifest in more punishing sanctions.

The ‘imperiled’ future of Mueller’s investigation

At the same time, following the strategic firing of Jeff Sessions as Attorney General, Democratic hopes of reopening inquiries into Russian interference may be dashed by the uncertain fate of Special Counsel Robert Mueller’s investigation. This is not least due to Trump’s open threat of “warlike” retaliatory investigations.

More immediately testing for the newfound House majority, which will assume power in January, are the implications of Trump’s swift but unsurprising decision to oust Sessions in favor of hardline loyalist Matthew Whitaker. While Sessions recused himself from overseeing Mueller’s inquiry over a conflict of interest, earning him extensive disparagement from Trump, Whitaker is a public anti-Mueller critic, raising bipartisan alarms over the fate of the Mueller investigation. Given Whitaker’s power and expressed intent to impede the investigation, Representative Adam Schiff, ranking Democrat of the House Intelligence Committee, warned that the shift in authority “places the Special Counsel’s investigation in new and immediate peril”. He added that interference “would cause a constitutional crisis and undermine the rule of law”.

Previous editions of the Kremlin Watch Briefing have drawn careful attention to the emergent threat of sophisticated video editing technology, enabling malign actors to create and disseminate misinformation on an unprecedented scale and to ever lower levels of detection. Last week, the White House was caught red-handed sharing such misleadingly edited content. Since the dismissal of CNN reporter Jim Acosta from White House press conferences, the Huffington Post reports that the video shared by the White House press secretary in support of the decision was doctored in order to depict Acosta inappropriately pushing a White House intern. 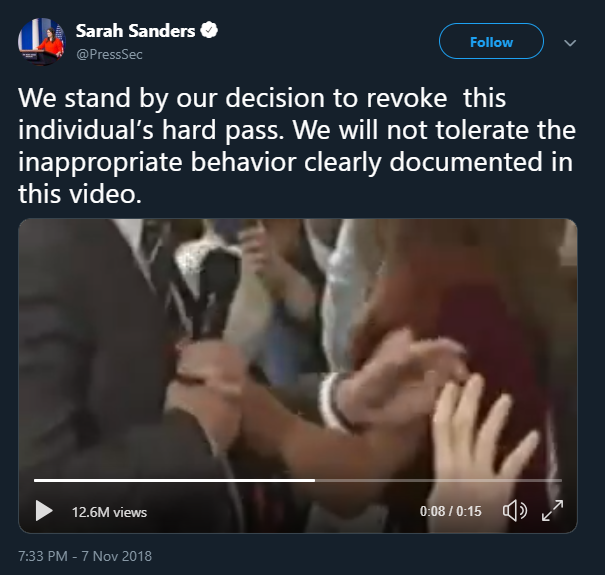 According to an independent analysis, it was determined that additional frames within the edited video appeared “to exaggerate the action of Acosta”. Of further concern are the video’s dubious origins. An hour before Sanders’ post, the video appeared on Infowars.com, a far-right and conspiracy-based fake news outlet that has been widely de-platformed in recent months. While the incident itself is relatively minor, it nevertheless demonstrates how failures in simple due diligence can result in fake news from outrageous sources reaching the top echelons of government.

The Institute for Strategic Dialogue has recently analysed international influence campaigns during Sweden’s 2018 elections. Although the joint effort concludes that there was no evidence for an internationally coordinated and managed influence campaign, the report highlights some novel insights. Voices of Swedish right-wing parties were amplified, and their most common concern was election fraud – even before the vote took place. Further, researchers identified that the Swedish far right is relatively isolated from European and US far right platforms as they rely only on a few magazines for their online content. Far-right media and politicians in Poland were also very active in spreading disinformation critical of Sweden and the Swedish government. The Polish media site ‘Poland Daily’, known for its anti-globalist views, disseminated false content regarding car fire attacks and gang violence in Malmo.

The report urges Swedish government agencies and civil society organisations to consistently monitor smear campaigns aimed at Sweden and use this information to specifically tailor messages to those most at risk. Digital education must become a priority in the national curriculum and in awareness-raising activities for the older adult population. Further, media companies should work directly with advertising analytics companies to demonetise sensational disinformation campaigns, while social media companies should provide greater transparency for their algorithms.