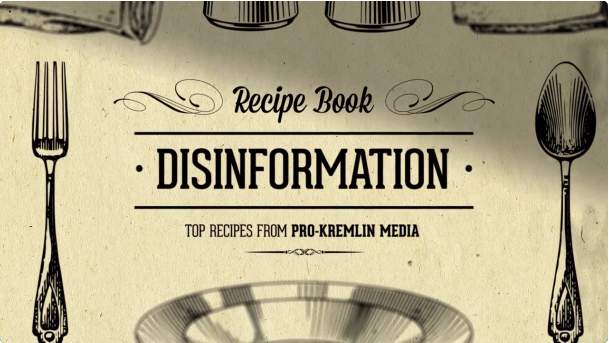 Mmmmmm. Do you happen to wonder about what tasteful meal would you like to eat for dinner? Then allow us to recommend you these fine disinformation recipes. Originally from within the magnificent walls of Kremlin have for a long time been covered by an attire of mystery, however proven by time and by thousands of gourmets all around Europe, they have now been carefully reconstructed by StratCom East team in Brussels. Thanks to them, you can now admire the ingenuity of pro-Kremlin cuisine in full light. Bon apetit!

“The Russian “Firehouse of Falsehood” Propaganda Model: Why It Might Work and Options to Counter It”; by Christopher Paul and Miriam Matthews, RAND Corporation

Although pointing out falsehoods and inconsistencies has its certain value, retractions and refutations are rarely effective. In order to directly counter or refute pro-Kremlin propaganda, it can be useful to remember several factors which can influence the effectiveness of our efforts and use them to our advantage, for example warnings at the time of initial exposure to misinformation, repetition of the retraction, refutation and corrections that provide an alternative story to help fill the gap in understanding when false “facts” are removed. Another option is to focus on countering the effects of Russian propaganda instead of countering the propaganda itself. For example, let’s suppose the goal of a set of Russian propaganda products is to undermine the willingness of citizens in NATO countries to respond to Russian aggression. Rather than trying to block, refute or undermine the propaganda, it would be more efficient  to focus instead on countering its objective; for example, through boosting the support of a response to Russian aggression, promoting identity and solidarity  with threatened NATO partners, or reaffirming international commitments.

“Why Putin went to war: ideology, interests and decision-making in the Russian use of force in Crimea and Donbas”; by Tor Bukkvoll, Contemporary politics

The Russian annexation of Crimea and the country’s prominent role in instigating and supporting anti-Kiev rebellion in Donbas surprised the world. From the ideological point of view, the Russians have employed various postulates that sought to whitewash their actions on the ground. The most dominant of these were axioms about Russians and Ukrainians being one people, the West supposedly using popular uprisings as a means of war against unwanted regimes, and the alleged Western exploitation of Russian weakness for the past 20 years. All of them constituted necessary preconditions for the Russian behaviour. However, there was a need for these axioms to be supported by another factor – and that is the process of foreign policy making. Most importantly it is the fact that the majority of the decision-makers standing behind the annexation of Crimea and supporting the Donbas insurgents were people with the FSB background: which is where their tendency to use force rather than soft diplomacy comes from. Last but not least, Putin’s personality, his emotions and willingness to risk also played a role. If we look at the issue from a different perspective, we will see an attempt to once again increase his popularity amongst the Russian public.

An upheaval on the Czech political scene and among civil society has been ignited by social-democratic backbencher Pavlína Nytrová who stated that legalisation of adoption of children by same-sex couples would encourage homosexuals to lobby for legalisation of paedophilia. In a subsequent interview for Respekt magazine she claimed that such state of affairs is already in place in several Western countries; for example in Norway, where state organisation Barnevernet allegedly ”steals” children from their families and hands them over to homosexual couples. The MP clarified that her sources of such information are: an unnamed man from Norway, newsletters from propagandist organisation called Russian mothers (Russkie materi), anonymous internet discussions, and – as the journalists found out –  also directly from conspiracy websites.

Hardly any pro-Kremlin conspiracy outlet has not published an article about the  upcoming NATO invasion into Russia. The alleged aggressiveness of the North-Atlantic Alliance towards Russia continues to be a topic number one.

Newly agreed measures for collective defence such as strengthening the presence of the Alliance in the Baltic States and Poland, or the common reaction to the hypothetical massive cyber-attacks against the Member States are often interpreted as preparations and creating of pretexts for the attack on Russian Federation.

In connection with that the Czech pro-Kremlin websites focused on the leaked e-mail communication of the General Phillip M. Breedlove published by the U.S. server C. Leaks.

On the other hand, especially Sputnik and several other conspiracy websites published several articles pointing out the alleged lack of readiness of NATO for the potential conflict with Russia. War between Russia and the United States, according to those news networks, seems to have become a real eventuality.

Kremlin Watch is a strategic program of the European Values think-tank, which aims to unravel and confront instruments of Russian hybrid war which is focused against liberal-democratic system. Find out more at www.europeanvalues.net/kremlinwatch/