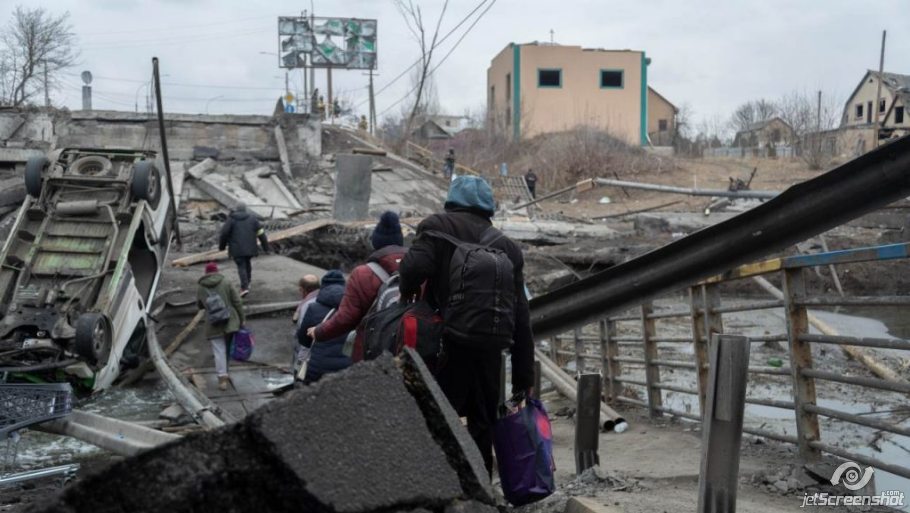 The war in Ukraine becomes more and more dangerous for humanity.

It is obvious that Putin is ready to seize his neighbor at any cost, while recklessly talking about a nuclear exchange. Meanwhile, propaganda in Russia itself is increasingly reminiscent of Nazi Germany.

“Even Hitler didn’t do this”

Fighting continues in Ukraine for the second week. The main battlefronts at the moment include Kharkiv, Chernihiv, Mykolaiv, and Sumy. The key Black Sea port city of Odesa, through which Ukraine’s vast grain trade passes, is preparing to defend itself.

Russian commanders and their master in the Kremlin seem almost to delight in their atrocious global image. Casting aside the hundreds of thousands who have poured into the streets of the world’s great cities, they continue to take action menacing not only Ukraine’s civilians but also the continent of Europe.

That was demonstrated on March 4 by an unprecedented military assault on the Zaporizhzhya nuclear power plant, north of Crimea. According to the President of Ukraine Volodymyr Zelenskyy, the direct shelling of the plant by Russian forces risked nuclear fallout six times higher than the consequences of the 1986 Chernobyl disaster. A fire started as a result of the barrage was extinguished. The head of the Zaporizhzhia Regional Military Administration Oleksandr Starukh said the Russian military now has the ability to disrupt the operation of the energy system throughout Ukraine.

Ukrainian military resistance continues. Fierce fighting continued in the region of Mykolayiv, one of the largest economic centers in southern Ukraine and a staging post on the route to Odesa, where Russian troops managed to break into the city on March 4, but then they were again driven out by the late afternoon. Elsewhere, Ukrainian forces continued to report fierce engagements across the country.

While the intensity of clashes in the Kyiv region has slightly decreased, the humanitarian problem continues to grow, former Deputy Minister of Defense of Ukraine Leonid Polyakov said in an interview with CEPA.

“From the bombing of cities, the occupiers moved on to the bombing of villages. Apparently, they would like to act away from the attention of the press. As for their goal to capture Kyiv, the city can be destroyed, but it is hardly possible to take,” he said.

The razing of major urban areas without the risk of high casualty street combat now seems the main strategy of Russian forces. Kharkiv refugees reported in an interview with Current Times TV: “Neighboring houses have already been bombed, people are sitting in basements. There was no communication, no electricity, there was no water for a day, pipes with hot water are broken. We were not able to sleep in our beds for a single night since then they started shooting at us.”

Another said: “The city is completely dark, empty, destitute, bombed out. Even the blood transfusion station was bombed. Small children, even newborns, sit on the subway.”

“My life began with the war and ends with this terrible war,” said an elderly Kharkiv woman born during World War II. “Even Hitler didn’t wreck the city as badly as Putin. Our city was just destroyed.”

The head of the Bellingcat investigative team, Hristo Grozev, put forward his version of what caused Russia’s special cruelty towards civilians is deliberate and based on a calculation; Russia is burning through resources and is now running low. Commanders are pressing to achieve results before this and before the need to resupply frontline units, which in itself is “a logistical nightmare.”

“It seems almost inevitable that in the coming days the Kremlin will decide on the transformation of the ‘special military operation’ into a full-scale combined arms operation against Ukraine,” wrote Yury Tsarik, deputy director of the Minsk Center for Strategic and Foreign Policy Studies. That would mean martial law at home and full-scale mobilization. Tactical nuclear attacks on Ukraine would also be considered, he said.

According to the Belarusian analyst, the Russian political leadership aims to destroy Ukraine as a state at any cost, and the Kremlin is ready to “deliver tactical nuclear strikes on the positions of Ukrainian troops and Ukrainian cities in order to break their resistance as soon as possible.” At the same time, the expert considers that the Kremlin considers the territory of Belarus as the most convenient platform for delivering strikes, in part because it thinks any NATO retaliatory strikes would be aimed at Belarus rather than Russia.

There are mixed views about the possibility of Russian nuclear first-use. Prior to the invasion, Alexander Vindman, former director of European affairs for the US National Security Council, told CEPA that Kremlin officials are just as interested in preventing nuclear escalation as Western officials and use aggressive rhetoric for blackmail. Nevertheless, German experts believe that such a possibility cannot be ruled out – at least as far as tactical nuclear weapons are concerned. Leonid Polyakov also says this is possible, although he adds that such a step is “close to an act of suicide.”

It is less than reassuring then that Russian propaganda outlets continue to cite the pro-Russian former Prime Minister of Ukraine Mykola Azarov, who said, without any supporting evidence that NATO had planned to base nuclear weapons in Ukraine this year to start a conflict with Russia.

Meanwhile, the calls for NATO intervention are rising, fueled by appalling images of death and destruction in Ukraine.

“Every day of delays costs hundreds of lives and increases the risk of a global nuclear catastrophe. If a no-fly zone is too risky for NATO, equip Ukraine with air defense capabilities and jets as promised! Do it today! Before it is too late!” Alexander Vindman tweeted.

Garry Kasparov, one of the leaders of the Russian opposition abroad, agrees: “If Putin wants a confrontation, it is inevitable. Therefore, it is very important that NATO resources be fully prepared for any provocation now. This can affect those generals who give criminal orders”, he asserted.

Meanwhile, the Russians are actively trying to establish control both over the newly occupied territories and over their own society. In the occupied territories, Ukrainian mobile networks are switched off and Russia’s sanitized TV channels have begun to broadcast. The last remaining opposition media outlets in Russia were shut down or forced to remove all war material from their websites after the Duma unanimously passed a law providing for punishment up to 15 years in prison for “making and distributing fakes” about the actions of the Russian armed forces. The social network Facebook was blocked.

Russians continue to be told that the country was “compelled” to start the war to “fight against fascism” as well as other bizarre constructions. Russian ideologists term the war a “sacrificial salvation of mankind” from the “Anglo-Saxon world order,” which is Russia’s mission to destroy.

As troops of black-clad, Putin-supporting Russians dance across Russian TV screens and dying children from cancer hospitals are paraded to form the “Z” symbol painted on the Kremlin’s invading armies, it is not just Kamil Galeev of the Woodrow Wilson Center who believes that Russia “is going full fascist.”

It is something we must all now consider, and confront.

Photo: Civilians fleeing Irpin, near Kyiv, Ukraine, on March 6, 2022. Russia continues assault on Ukraine’s major cities, including the capital Kyiv, more than a week after launching a large-scale invasion of the country. Credit: Andrea Filigheddu/NurPhoto