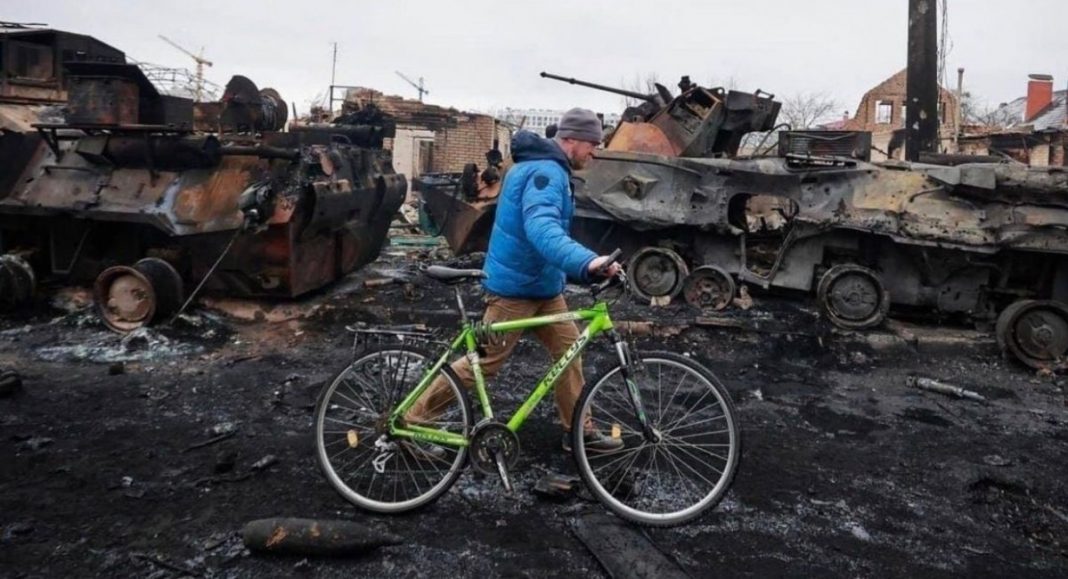 By Kseniya Kirillova, for Defence Express

At the moment, it is sure sad that the majority of the Russian population supports the war in Ukraine. Pro-government opinion poll organizations cheerfully report 71% support for the “special operation” and 84% of Russians trusting their military. The findings by independent public opinion poll experts, based on browsed social network content, are a little more optimistic

Thus, they show that, in the Russian part of social networks, about 52% of posts are supportive of the war, while only about 30% are against the war, and the remaining 20% of the social media posts reflect a “tacit approval” of the war.

Internet researchers note that, regardless of the approval or disapproval of the war, more than 30% of the Russians express sympathy for the Ukrainians. At the same time, those who believe in propaganda are firmly convinced that there have been no bombardments of civilians that are wiping out Ukrainian cities and their residents from the face of the Earth.

At least one fact remains clear: Over half of the Russians currently support the war, actively or passively. I had an opportunity to talk to several dozen Russian dissidents, living both in and outside of Russia. They all note an aggressive belief in propaganda on the part of their relatives and friends and the impossibility of convincing them against that propaganda.

Several factors are behind this high percentage of support for aggression. Firstly, just before the war started, the Russians came under unprecedented heavy military propaganda offensive against the background of the Russian-instigated escalation along the line of contact on February 18-20. According to an opinion poll survey conducted by the Levada Center immediately after this, 60% of Russians believe that Russia’s military actions were provoked by the United States and NATO countries, 14% blame Ukraine for this, and only 3% of the people surveyed said that it’s Russia who is to blame for what was happening.

Secondly, the Russians have not yet fully felt the impact of the sanctions on themselves, but the very fact of the sanctions coming into force has been actively used by propagandists to create the image of an “external enemy seeking to destroy Russia.” In fact, the same tactic of substituting cause and effect had been used by Russia’s propaganda machine in 2014 as well.

Thirdly, despite the “patriotic frenzy” and the high level of anti-Western and anti-Ukrainian sentiment that was already present among the society, one gets the impression that support for the war at its initial stage paradoxically became a transformation of the initial quest for peace. The propagandists were assuring that Russia was not starting, but ending the war that NATO and “Ukrainian Nazis” were waging against it. Accordingly, at the moment the invasion began, the Russians felt relieved, believing that with the beginning of the invasion, “the threat will be eliminated”, and in place of “an anti-Russian NATO foothold at the Russian borders”, they will again see a “peaceful and friendly Ukraine”.

It’s clear however that, as the fighting is ongoing, the false sense of relief is being replaced with anxiety.

Against this background, the main propaganda narrative began to change. Propaganda began to emphasize more and more that it was not that important how justified the war really was, and whether it was worth starting it. The main thing is how propagandists convince the population to “support Russia in wartime,” since the country has no other chance to survive, but by winning a victory.

Accordingly, all the opponents of the invasion are called “traitors“. Former spy and active war propagandist Andrei Bezrukov openly proposes that those people be not just arrested but shot to death “according to all the laws of wartime.”

Currently, two key propaganda narratives can be singled out, which are partly overlapping, but contradicting each other in many aspects. On the one hand, propaganda continues to stick to the myth that the war was forced by the need to “fight against fascism” and “protect Russian sovereignty from the Western yoke.” To feed this sentiment, fakes are brought in saying that Ukraine has been creating nuclear weapons and US-funded biological weapon laboratories are operating in the country, and so on.

In this context, a pretty dangerous signal came from a fake report published by key Russian news agencies, including RIA Novosti. The report says that, by the end of this year, NATO purportedly planned to instigate a conflict with Russia on the territory of Ukraine using nuclear weapons. The purpose of that fake report is not yet clear. Was that another belated justification of the war unleashed by Putin or a preparation for a nuclear conflict in the style of the Kremlin’s usual rhetoric “it was inevitable anyway” and “we didn’t start it.”

However, it is clear that motivation based on fear and a sense of compulsion and undesirability of war is unable to mobilize the population to support long-term military action. That is why the propaganda machine has been actively introducing a second narrative, painfully reminiscent of real fascism, the fight with which has long been talked about by the Russian authorities. Russian ideologues call the war unleashed by Moscow “the sacrificial salvation of mankind” from the terrible “Anglo-Saxon world order”, which, according to them, is the historical mission of Russia to destroy. They do not hide the fact that Russia’s prime goal is to change the existing world order, rather than “to protect the population of Donbas.”

It’s plain enough that these narratives are similar to how the outbreak of the World War II was justified by Nazi Germany. Militaristic flash mobs in support of Putin, organized by some Russian businesses, also replicate the aesthetics of the Third Reich. The fact that this contradicts the main, supposedly “peaceful” narrative, does not bother either the propagandists themselves or their intended audience. Similar contradictions were encountered before the full-scale invasion started, and did not cause any dissonance among the Russians either.https://www.youtube.com/embed/LO_1eJyb6WY

It can be assumed that, as the sanctions are in place and the collapse of the Russian economy becomes inevitable, the proportion of the people exposed to active militaristic mobilization rhetoric will decrease. Even now they rather account for a passionate minority. However, the situation is more complicated with the majority silently approving the war — out of fear rather than of the patriotic frenzy. These people believe that if Russia is defeated, it will be destroyed, and Moscow had no, or at least at the moment no other way out than to win. And this is what makes them solidarize with their government.

In communicating with such people, it is important to remove the false sense of relief and break the false link between war and security, which is now being actively instilled into Russians. It should be explained that it is Putin who is pushing the world towards an inevitable nuclear war following his totally inadequate perception of the reality. Of course, it is important to make them see the terrible destruction Russia is causing in Ukraine. But this is important precisely in the context that the person who committed this will not stop short of drowning in blood the whole world and Russia itself.

That is why the horror and death that Moscow brings to Ukraine will inevitably boomerang back on Russia. It’s important that the Russians understand that the continuation of the war does not lead to “victory” or “elimination of the threat”, but, rather, to an inevitable catastrophe of the planetary scale, which will certainly affect their country as well.

By Kseniya Kirillova, for Defence Express