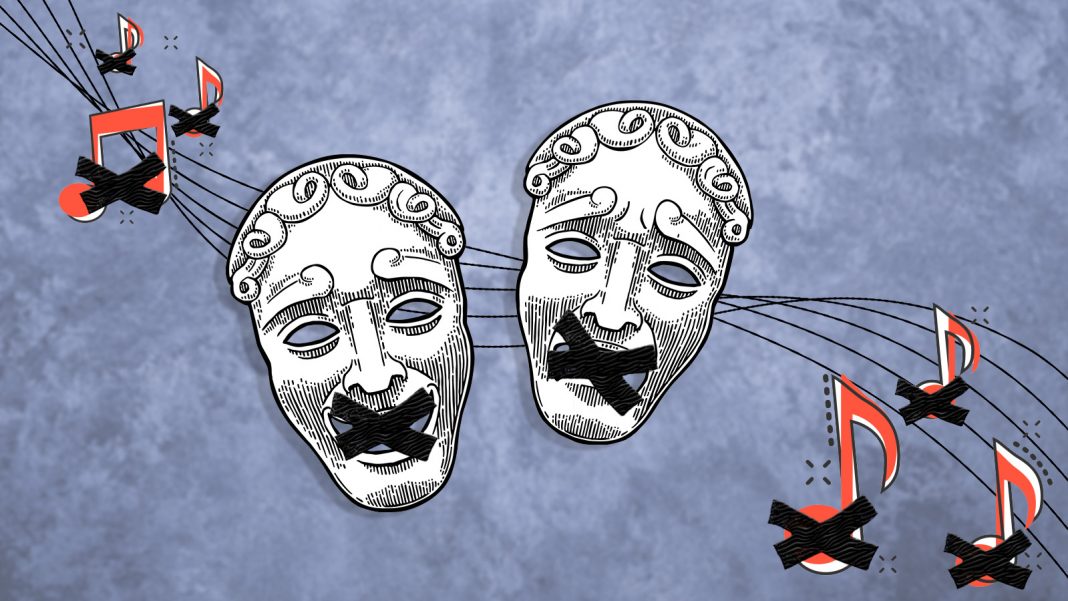 The Belarusian regime has gone to great lengths to find and punish the perpetrators of a so-called Western ‘hybrid war’ and attempted ‘colour revolution’ – this is how state and pro-Kremlin propaganda portray the participants of the 2020-2021 Belarusian protests. By July 2021, the Belarusian Investigative Committee had opened 4,691 criminal cases related to the protesters who came out to the street to protest fraudulent elections. As of 26 December 2021, 955 persons were political prisoners: among them more than 30 journalists and media workers. Follow the updated count here.

The numbers keep raising. On 14 December the regime’s court system sentenced Siarhei Tsikhanouski, who had prepared to run against Lukashenko for president, to 18 years in prison in a politically motivated verdict designed to increase fear among ordinary Belarusians wishing to exercise their political rights. Five others prominent political prisoners were also sentenced to 14-16 years based on unfounded charges. The six persons have been the subject of a smear and defamation campaign led by Lukashenko himself.

While arrests and imprisonment are among the most visible types of repressions, at times, the state’s reprisals take another most bizarre, almost paranoid form. Like when the king gets angry at the jester.

On 21 November 2021, on its 95th anniversary, the National Academic Drama Theatre in Vitebsk staged a premiere. The play was based on Belgian novelist Charles De Coster’s masterpiece from 1867 The Legend of Thyl Ulenspiegel and Lamme Goedzak, which speaks about the history of Flemish resurrection from Spanish rule. Days later, it was reported that the play had been banned, the contract of the theatre’s director will not be extended and the actors were being fired.

Belarus Minister for culture Anatoly Markevich and other high-ranking officials who attended the play, apparently found unacceptable parallels between the Flemish people’s fight for in the 16th century and the present-day situation in Belarus. The officials particularly disliked the play’s poem with the words “Long live Flanders!”, an analogue of “Long live Belarus!”, a century-old motto which is often used by Lukashenka’s opponents and punished in the courts as an ‘anti-state slogan’.

Radio Liberty reports that the Minsk Philharmonic cancelled charity concerts planned to commemorate Holocaust victims, following an email from a concerned citizen to the Ministry of Culture. The email alleged that the “[collected] money would be spent on supporting opposition organisations (e.g., the Hrodna hospice), and artists taking part in opposition rallies.”

The Hrodna Children’s Hospice is indeed considered by the Belarusian regime as a ‘wrongful organisation’. It was liquidated by the authorities in what was described openly as part of their response to the EU’s sanctions. The hospice’s director Olga Velichko is facing criminal charges for taking part in the protests movement.

Belarusian security forces detained people to make ‘confessions’ on video for their alleged ‘crimes’. Some of such videos even get paid promotion on Youtube, as we previously investigated.

As events are evolving, Belarusian citizens are forced to confess to new types of wrongdoings. In late November, regional state-owned channel Belarus 4 Homiel showed detainees asking forgiveness for their critical commentaries in social media posts about the migrant situation which has been manufactured by the Lukashenko regime.

On 1 December 2021, state-owned TV channel STV reported that 11 people were detained for “cynical commentaries” online about the death of Russian paratroopers during military exercises in western Belarus. The TV channel demonstrated how armed special police broke into the apartment of one such person who is shown at home in his underwear, followed by his confession video in the police department about him taking part in ‘mass riots’ and feeding ‘extremist Telegram channels’ with information.

Detained sometimes make rather creative ‘“confession” which, after being shown on state TV or published in pro-regime Telegram channels, become popular on social media as people tend to be attracted out of curiosity.

We do not link to the videos – here’s why

These videos are still available via Youtube or via the TV stations. Even if we on EUvsDisinfo have a general principle of providing links for you as reader to examine the material, which we discuss, we will not link to such videos. The reason is that the persons on the footage are paraded in front of the digital public audience in an act which is very likely against their free will or perhaps even produced under duress. We do not want to contribute to the regime’s propaganda.

Tadeusz Giczan, the editor-in-Chief of Belarus’s largest Telegram channel NEXTA_TV, earlier termed such footage “hostage videos”. Also Amnesty International criticised this practice used in the case against Raman Pratesevich saying such “confession” may have been obtained under duress.

One of the November ‘heroes’ was a 65-year-old Anatoly Shelkovich who was arrested for making white-red-white flags for public display. On confession video he explains himself as an amateur of red and white colour combination, giving as examples the facts that his wife is a red-haired woman and that tomatoes with sour cream are one of his favourite meals. Shelkovich received two 15-day imprisonment sentences; it is unclear if he gets released in December or will get an extra term at the final imprisonment day, as Belarusian courts often do.

Friendly fire against a fighter with white and red colours

Human rights defenders documented a case in which a Lukashenka supporter’s fight against red and white colours backfired. A 44-year-old woman from a small Belarusian town Dobrush noticed a red and white tent which belonged to the local military enlistment office and uploaded a video on Youtube titled, “White-red-white supporters. Military enlistment office. Dobrush”. Eight office workers reported her to police for slander and the woman received a 2-year suspended sentence.

Looking for radicals and extremists

State security officials repeatedly promised to continue looking for “radicals and extremists,” and they kept their word. According to Belarusian human rights defenders, during the month of November at least 143 persons, including 23 women, were convicted in politically motivated criminal trials. Between them they were sentenced to a combined 156 years of imprisonment, as well as 91 years in penal labour settlements and over 100 years of home detention.

Numerous cases of ill-treatment, inhumane conditions of detention and torture of individuals imprisoned on politically motivated charges continue to be documented by human rights defenders and journalists. Courts often hear cases behind closed doors and ignore the detainees statements about ill-treatment during detention and in pre-trial facilities, human rights defenders report.

Earlier, in June we reviewed several absurd cases of uncompromising struggles of the Belarusian regime with the banned white-red-white flag. People were fined or imprisoned for wearing white-red-white socks, hanging red and white towels and blankets to dry on a private balcony, and for placing a snowman in the yard of a private house with a red scarf.

According to human right defenders, the Belarus courts continue hearing cases against persons arrested for displaying white-red-white flags and stickers on windows, reposting and commenting on social media, as well as other forms of protest activities or for expressing their opinions. For instance, in November, one of Minsk’s district courts sentenced a person to 15 days of imprisonment for “holding an unauthorised picket by placing white-red-white ribbons on the rear-view mirror of a Land Rover in an indefinite period of time in order to publicly express his public and political interests.”

The world literature is full of tales and stories where the jester not only entertains the king but also makes fun of him. The jester is also the keeper of true wisdom and the secrets of what is really going on outside the view of the rulers. The novels where jester is killed often ends in tragedy for the king too.