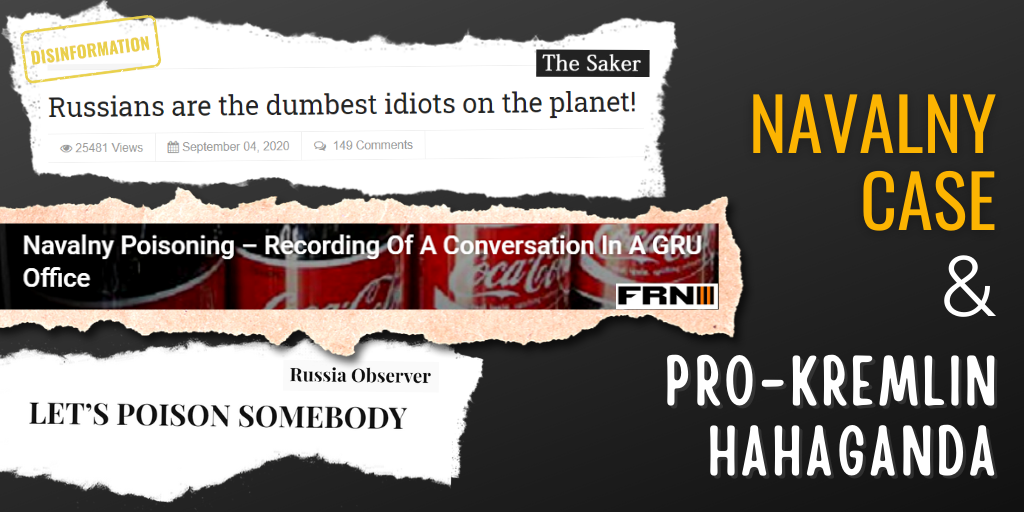 “Hahaganda”- propaganda, disguised as humour, ridicule, is a powerful and efficient instrument for disinformation. The approach was frequently put into practice in the Skripal Case; for instance by RT, who produced a chocolate Salisbury Cathedral as a Christmas gift. The suspects identified by British police claimed in an interview for RT that they travelled to Salisbury not for odious reasons, but to see the 123 meters high tower of the cathedral. Ha ha. At the time, four people had had to endure intensive care after contacting the poisonous substance; one woman died.

The fun continues, as German experts report that the condition of Russian dissident Alexei Navalny is improving, after several weeks in an induced coma. The doctors hope that he will fully recover; with only limited consequences for his physical health. Now, the fun is the fact that Navalny survived. Snicker, snicker.

Canada-based Russia Observer conjures up a conversation in the Kremlin on how to distract the West from Belarus and the protests in Russian Khabarovsk:

– Wait Boss! I’ve got it. Let’s poison somebody! That’ll change the headlines. Sure worked that last few times.

– Well, he won’t die of course – our poisons are no good – and, after a day or two we let him go to some NATO country and they’ll say he was poisoned.

Q: What is Novichok?

A: Novichok is a very mild poison, which Russia uses whenever it wants to tell the world to smash it with economic sanctions without actually endangering the life of its target.

Novichok is a group of military grade chemical agents, forbidden in international law. They were developed by the Soviet Union during the Cold War. The Novichok family are binary substances, like epoxy glues. They can be safely handled until two parts of the substance are united. More on Novichok can be found in this link.

One particular element of the Novichok hahaganda focuses on the fact that the victims don’t ever seem to die. One pro-Kremlin author, The Saker, dispenses useful advice on how to kill Navalny next time:

All the Russians needed to do to kill Navalnyi would have been to give him a heart attack using any one of the many untraceable agents in existence (say, potassium chloride).

In despair, the clueless FSB might have caused Navalnyi do die in a car “crash”.

I am telling you – the Russians are fantastically stupid, the dumbest people on the planet.

Especially their intel and security officers, their bio-warfare specialists and their hackers.  Morons. All of them!

Ha ha. We can see the same claim here and here, or here:

On the one hand, the Russians are constantly targeting people with poisons that make anthrax seem like chalk in comparison, on the other, no target of theirs ever seems to die (in a timely fashion).

A Switzerland based author (with a PhD and a pilot license!) also suggests alternative methods for dealing with Mr Navalny (bwa-ha-ha-ha):

– Comrade General, I have a proposal. This Novichok didn’t work last time, we just embarrassed ourselves. Let me, following the example of our Saudi colleagues, take a bone saw and everything will be all right, nothing will be found.

Only – they do die, even without expertise, provided by pro-Kremlin pundits.  Anna Politkovskaya, Boris Nemtsov, Natalia Estemirova, Yuri Shchekochikhin, Sergei Magnitsky – these are just few prominent politicians, journalists, activists and whistler-blowers  killed and murdered because of their dissent. Some have perished abroad: Pavel Sheremet in Kyiv, Aleksandr Litvinenko in London. Others have been imprisoned or forced into exile. Still funny? Ha ha?