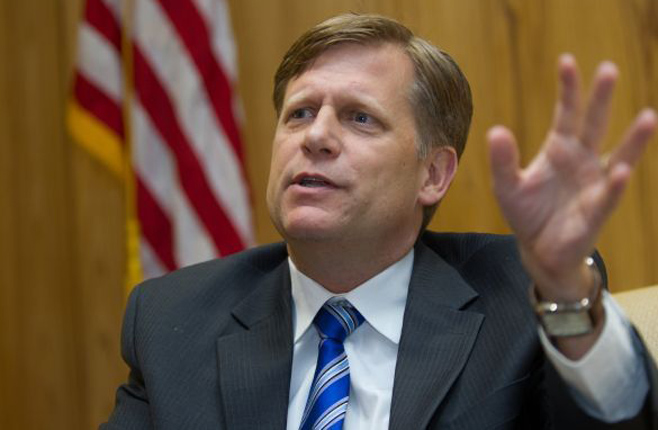 Normal people have normal hobbies. They garden. They hike through the woods. They collect stamps. I am not a normal person. My favorite pastime is scouring the Internet to find the original statement of a U.S. official that in Russian translation is an outrageous insult to the great Russian nation, its history, its leaders, and its ice cream. Why do I do this? Because most of the time in the original it’s not so insulting, or not insulting at all, or something else altogether, Michele A. Berdy wrote for The Moscow Times.

This week’s challenge: What did former U.S. Ambassador Michael McFaul say to the Estonian newspaper Postimees? Here I am seriously hampered by my inability to read Estonian, although my guess is that the interview was in English and then translated into Estonian. So I’ve got Russian-made English translations of Russian translations of Estonian translations of English statements. Russians call this испорченный телефон (broken telephone), but I call it fun.

It started with this “quote” from McFaul: “The United States should curb Russia according to need and respond to it,” which appears to have been a translation of this: США должны в соответствии с потребностями обуздать Россию и ответить ей. This appeared in a blog by Russian Foreign Ministry spokesperson Maria Zakharova, who said McFaul’s statement взорвал рунет (exploded the Russian Internet), although I couldn’t find any indication of that. I mean, McFaul is important, but he’s not a naked Kim Kardashian.

The “explosive” word here is обуздать, which has the primary meaning of “to bridle” (узда is a bridle). It has associations of breaking a free or lively horse: Удалось обуздать его амбиции (We were able to rein in his ambitions.) And there is a whiff of violence in it, like in this quote of Josef Stalin: Мы должны обуздать всех тех, кто раскалывает наши братские партии на Западе и на Востоке (We must rein in those who are splitting up our fraternal parties in the West and East.) So the image is of breaking and bridling the free spirit of Russia. Damn Yanks.

This Russian quote appears to then have been picked up and translated back into English and spread among the trolls: “The United States needs ‘to rein in’ Russia and respond to its actions.” “Michael McFaul said that Russia must be curbed.” “McFaul said the need (sic) to ‘restrain’ Russia.” One blogger must have used machine translation: Former U.S. Ambassador to Russia said that Russia must “curb.”

Of all the translations, I thought “to curb” was the farthest off. Although it means to limit or constrain, the image is of putting up a boundary. But, just in case, I decided to consult an actual dictionary. I know — crazy, right? And there I discovered that “to curb” is the perfect translation of обуздать. When “curb” entered English it meant “a strap passing under the jaw of a horse used to restrain the animal.” Handy things, dictionaries.

But what did McFaul say? Here’s his quote in the English version of Postimees: “Tragically again, NATO has to deter Russian threats.” That’s it. No curbing, no Russia, no United States.

So the Russian Internet is outraged by a quote they made up. When asked what he thought about it, McFaul said: Это было очень странно, честное слово. Объяснений я пока не видел. Я не понимаю, честное слово. (It was very strange, to be honest. I can’t explain it. Honestly, I just don’t get it.)

By Michele A. Berdy, The Moscow Times

Michele A. Berdy, a Moscow-based translator and interpreter, is author of “The Russian Word’s Worth” (Glas), a collection of her columns.