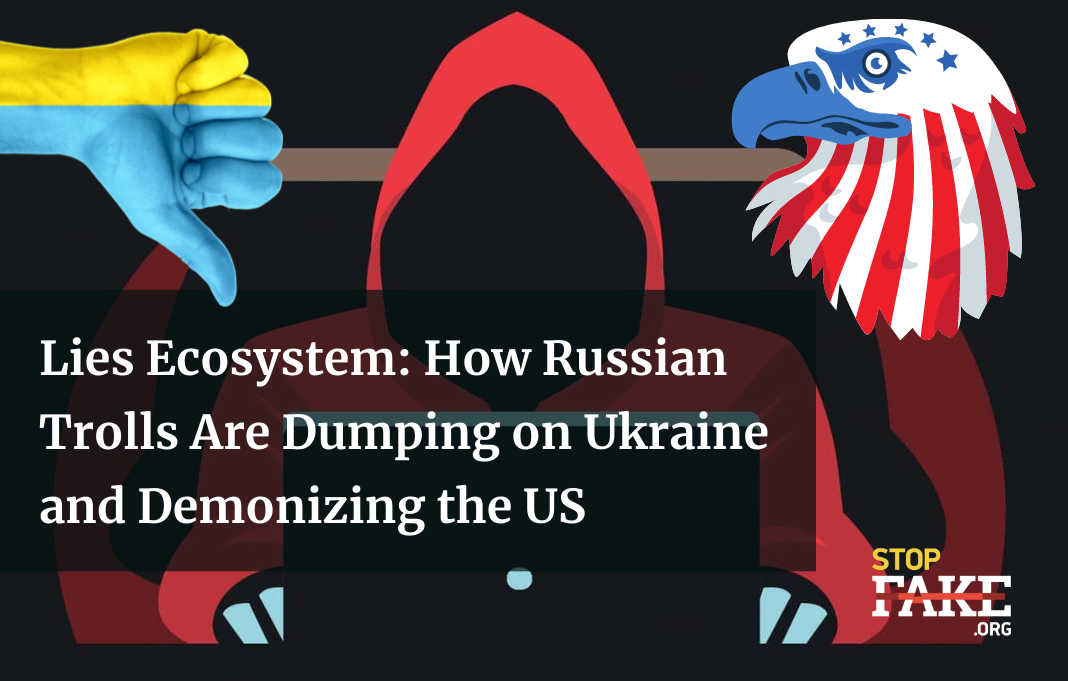 While US President Biden held video talks with Russian President Putin, the internet was buzzing from a Russian troll avalanche. Since the publication of stories about Russian accumulation of troops on the Ukrainian border, their massive attack has flooded leading Ukrainian publication’s Facebook pages. And no matter how much support Washington expresses for Ukraine, pro-Kremlin trolls are tirelessly trying to convince Ukrainians that Biden is about to surrender Ukraine and start a new war in Europe. StopFake tried to unravel this ecosystem of lies.

The confrontation between the United States and Russian has many interpretations. One of the main narratives for the Kremlin is that Washington is conducting a “disinformation campaign to push Ukraine into hostilities in the Donbas”. Over the past month, this narrative has become a mantra for the Russian Foreign Ministry as well as for a number of high-ranking officials, who consistently try to persuade that “the United States has militarized Ukraine with the goal of military escalation in Europe.”

It is no wonder that this narrative was massively disseminated on social media on the eve of the Biden-Putin virtual meeting. Some of the messages being pushed in the Ukrainian Facebook segment include the following: US policy on NATO enlargement is destabilizing; don’t increase NATO troops in Germany and the US fleet presence in the Black Sea and Russia won’t increase its military buildup; US is pumping up hate between Ukraine and Russia; looks like America is starting something and not Russia. This is one of the biggest information attacks by Kremlin trolls in recent times.

Trolls can be real or fake accounts with a real person behind them. They are a powerful tool in the hands of Russian propaganda in their attempts to quickly change the opinion of social media audiences about a particular event or person. The inauthenticity of a troll page is easily revealed. Here are a few examples of troll accounts spreading Russian propaganda on Facebook.

Ukrainian Facebook has long faced attacks from trolls attempting to form a particular public opinion. Typically, the goal of information campaigns using trolls is to modify public opinion, direct it in a different direction, distract it from the main problem being discussed.

StopFake checked the comments in stories by leading Ukrainian media on the Bident Putin talks and the role of the US in “aggravating” the relationship between Ukraine and Russia. We looked at publications about the US Secretary of Defense statements regarding Ukraine, the Biden Putin virtual meeting, the Ukrainian public’s appeal to Biden, the announcement that President Biden would also speak to Zelensky, New York Times and Bild articles about Russia’s possible attack on Ukraine. We analyzed comments on the Facebook pages of the Zerkalo Tyzhnia newspaper, Voice of America, Radio Liberty, Novoye Vremya, TSN, Liga.net, and Ukrainska Pravda.

Russian troll comments are easily recognized by the metanarrative that they propagate in a wide variety of publications – that the United States is selling out Ukraine or that Washington wants a new war in Europe. Biden sold out Afghanistan, he’ll also sell out Ukraine, American support is worthless, the message goes. These messages are disseminated as personal opinions or comments and fake quotes from American officials.

Such social media comments completely coincide with Russian propaganda theses, as headlines in the following Russian media stories attest: Ukraine admits gloomy lesson from the US – RIA Novosti; Israeli expert says the US will leave Ukraine like they left Afghanistan – Newdaynews; US chooses Ukraine as new source of world tension – Moskovskyi Komsomolets. Such headlines have been blaring from Russian publications since this summer when it became known the US would pull all its troops out of Afghanistan.

Ukraine is a good occasion to meet and discuss the prospects of military alliance between China and Russia – this is another thesis that Kremlin trolls like to throw into their disinformation comments mix. This theme shifts the focus of Russia’s interest in seizing Ukraine to more global level, the important issue of a Russian-Chinese military alliance, something the US allegedly is not at all happy about and want to wreck these Russian plans via Ukraine.

Such headlines have been widely seen in Russian media in recent months: Russia and China will not allow American nuclear hegemony – Eurasia.expert; Russian Federation and China preparing an answer to US military threat – Vesti.

Particular attention in troll comments – usually unflattering – is paid to White House spokeswoman Jennifer Psaki and US Secretary of State Anthony Blinken. The late Colin Powell is another person that Russian trolls frequently mention in comments intended to undermine Ukrainian trust in the United States.

For years, Kremlin media has portrayed Ms. Psaki as a foolish and short-sighted person who doesn’t seem to know what’s going on in the world and therefore can be easily misled. Powell is portrayed as a liar, whose UN speech led to the Iraq war in 2003 (although Powell himself has repeatedly apologized for this). A quick review of the Russian media for 2014-2015 clearly demonstrates this – for example, articles in NTV and Argumenty I Fakty dehumanize Psaki during her tenure as State Department spokeswoman, portraying her as a funny character who is credited with clumsy statements. After Colin Powell’s death, a whole information campaign was staged in the Russian media: “A man with a test tube. How Colin Powell became a symbol of American lies “- Argumenty I fakty,” Former US Secretary of State who waved a test tube at the UN dies”- Lenta.ru.

However, one of the main themes of the pro-Kremlin trolls before the talks between Presidents Joe Biden and Putin was the so-called reset of US-Russian relations and the inevitable American concessions in favor of Russia, meaning that America is ready to hand over Ukraine to Russia, exchanging it for other strategic interests.

The premise of America selling out Ukraine unites easily with an opposite premise, that the US want to start a new war in Europe, weaken Russia, which really does not want to go to war with Ukraine. While these premises are mutually exclusive, it is not worth looking for logic here, as the main task of trolls on social media is to polarize opinion and society and distort the truth. Ultimately it doesn’t matter what exactly will make you distrust the United States and Ukraine’s other main international partners. For Russia it is important that Ukrainian society lose faith in outside support and assistance and reject the “destabilizing” cooperation with the US and the West in favor of Russia’s friendship, which is ready to smother Ukraine in its stifling “fraternal” occupying embrace.