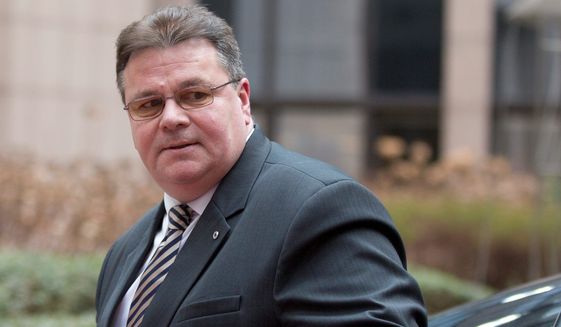 Lithuania and other Eastern bloc nations are craving a clear and decisive message of support from the United States, as Russian President Vladimir Putin pushes the limits of NATO’s resolve and moves to fill “gaps of influence” created by the West’s failure to defend its interests and international law, Lithuania’s top diplomat warned Tuesday.

Lithuanian Foreign Minister Linas Linkevicius also said Moscow is waging a potent propaganda war targeting Lithuania and other former states of the Soviet Union and that NATO is not responding with an effective and adequately funded message.

“Russia is not a partner; it’s a factor,” Mr. Linkevicius said.

He called on the Obama administration to lead a “more coordinated voice” against a Russia that plays increasingly by “self-invented rules” designed to provoke confrontation and effectively dominate smaller, weaker nations in the region.

“We want the Americans to be as active as possible because it’s the only way out of this situation,” Mr. Linkevicius said during a wide-ranging interview Tuesday with editors and reporters at The Washington Times. “If Americans will not be active, it will be very difficult.”

Moscow’s goals are multidimensional, he said. Mr. Putin seeks to drive a wedge between NATO and the European Union and to expand Russia’s sphere of economic, political and military influence by upholding a Moscow-controlled union of smaller nations.

Mr. Linkevicius would not criticize the Obama administration directly, but he lamented that the White House appears to have been won over by advisers wary that a strong public resistance against Russian aggression could be read as a provocation that might worsen relations between Moscow and the West.

He praised the administration for leveling sanctions against Russian officials in response to Moscow’s annexation of Ukraine’s Crimean Peninsula last year, but stressed that U.S. officials in charge of Washington’s overall policy have missed the reality that “if you say or do too little and too late, that can be provocative in itself.”

It’s a message that Mr. Linkevicius, who has served as Lithuania’s top diplomat since 2012, can be expected to deliver personally when he meets Wednesday with key Obama administration officials, including acting Undersecretary of State for Political Affairs Thomas A. Shannon and Celeste Wallander, the National Security Council’s senior director for Russia and Eurasia.

In the interview, the 54-year-old foreign minister said the lack of resolve from Washington has resulted in a drop in U.S. standing across the former Soviet republics and yearning for a more robust American presence — if only through clearer and more decisive media messages to counter Russian state news outlets and cable channels that have increasingly come to saturate the airwaves across the region.

“When there are gaps of influence that are not filled, then they get filled immediately by other leadership that is visible,” he said.

In addition to Russia’s moves in Ukraine and its military occupation of parts of Georgia after a brief 2008 border war, Mr. Linkevicius cited the Russian military’s escalation in recent months in the civil war in Syria.

In each case, he said, the Putin government has engaged in a campaign of “probing and testing as far as it is allowed to go.” When it meets resistance — such as with sanctions relating to Ukraine or with Turkey’s recent downing of a Russian fighter jet — Moscow seizes on its gains to set more favorable terms for negotiation with Washington and its allies.

By Guy Taylor, The Washington Times