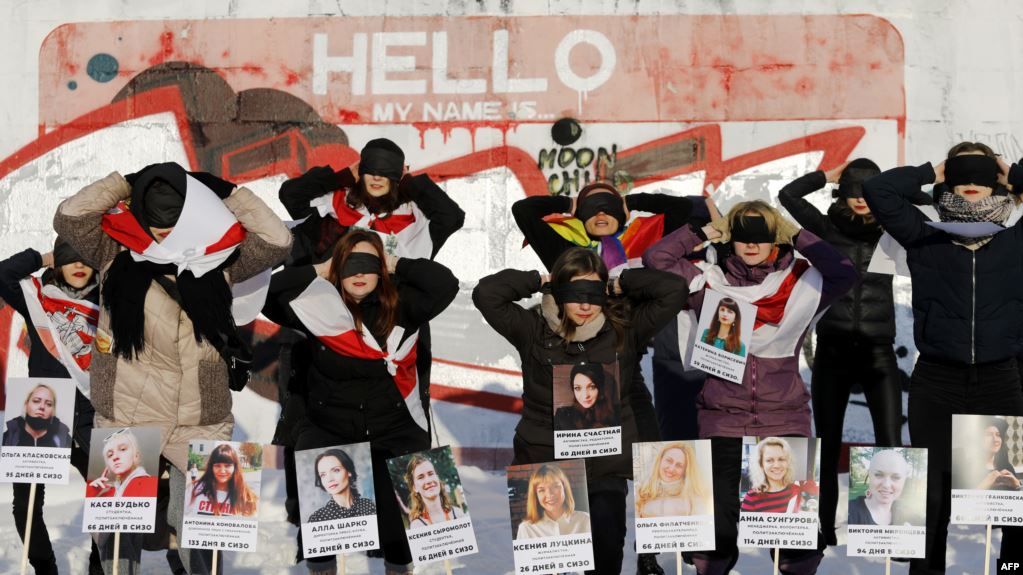 Aleksander Lukashenko,
President of Belarus
“[They] decided to carry out a blitzkrieg in August, instantly overthrow the government, or at least show that the government has fallen, and bring in NATO troops.”
Source: BelTA news agency, January 28, 2021
FALSE

Lukashenko said law enforcement had kept Belarus from falling into “the abyss of another color revolution.”

The term color revolution was widely adopted in the ex-Soviet space after the 2004-2005 Orange Revolution against widespread election fraud following the November 2004 presidential runoff in Ukraine. Orange was the color chosen by then presidential challenger and pro-Western candidate Viktor Yushchenko for his election campaign; he was running against pro-Russian incumbent Viktor Yanukovych.

The protest movement resulted in the initial runoff results being annulled. Yushchenko then won a second runoff, becoming president in January 2005 and ending the Orange Revolution.

Belarus, Russia and others portray “color” revolutions as protest movements fomented by the West with the aim of destabilizing or overthrowing the governments of target states.

“We have suppressed the most vivid manifestations of protest activity,” Lukashenko said, adding: “The difference between the Belarusian and Russian events, you’ll see, there may be several. But the main difference in our case, [they] decided to carry out a blitzkrieg in August. Instantly overthrow the government, or at least show that the government has fallen, and bring in NATO troops.

“Russia will be rocked for a long time. They understand perfectly well that it is impossible to carry out a blitzkrieg in Russia.”

Lukashenko’s assertion of outside orchestration is false. There is no evidence that Western governments staged protests in Belarus or planned to send in military forces.

However, Western powers have supported free and fair elections in Belarus, as well as civil society efforts in the country.

Opposition to Lukashenko’s 26-year rule, which has become increasingly authoritarian during a time of global pandemic and economic decline, has grown into widespread public protest.

Most of the violence during six months of protests has been perpetrated by Belarusian state authorities.

Young people in particular have joined the opposition to Lukashenko’s rule. In an online ZOiS survey conducted among 2,000 Belarusians aged 18–34 from June 22 to July 4, 2020, only 10 percent said they had planned on voting for Lukashenko during the August 2020 presidential election.

About 80 percent of respondents said they planned to vote. Another 20 percent said they knew someone who had protested in the past year.

On August 9, 2020, the Belarusian presidential election was held after five days of early voting. That evening, protesters took to the streets when state TV claimed Lukashenko had won 80 percent of the vote.

The Associated Press interviewed election workers who said they saw ballot fraud or were pressured to falsify results in favor of Lukashenko.

The following weekend, up to 200,000 people marched against Lukashenko in Belarus’ capital Minsk — a large number in a city of roughly 2 million. The BBC estimated that only 4,000 to 5,000 people attended a pro-government counter-demonstration.

An independent journalist who spoke to National Public Radio noted the protesters had come from “all walks of life, including students, technology workers, small business owners and factory workers.”

“There is no sense of radicalization among these protesters,” the journalist said. “It’s sort of a united front of social discontent.”

Indeed, in August hundreds of state television employees went on strike to protest what they called a rigged presidential poll. Factory workers and students also launched nationwide strikes to get Lukashenko to step down.

Elderly people also took part in the protests, with one person saying that the presence of older citizens seemed to curb police violence. There were also reports of police officers quitting despite facing legal repercussions.

Lukashenko was nonetheless sworn in for his sixth term on September 23. In November, an expert report by the Organization for Security and Cooperation in Europe “found the presidential election fell short of fulfilling the basic international requirements for genuine elections.”

Following the election, tens of thousands of people were arrested during a series of weekend demonstrations. From August 9-12, riot police detained an estimated 7,000 protesters and bystanders, “holding them in inhuman and degrading conditions, and torturing and otherwise ill-treating hundreds,” New York-based Human Rights Watch reported.

One thousand people were detained during a peaceful protest in November.

Rights groups have reported unlawful use of force, torture and even state-backed killings.

The minimum number of people injured by police during August and September was 1,373 people, according to a report released by Mediazona, a Russian media outlet, in conjunction with Open Democracy. That report relied on documents leaked form Belarus’ Investigative Committee.

Detainees have been subjected to beatings and electric shocks. Belarusian police have also reportedly sexually assaulted those detained at protests.

Opposition leaders have shared images on social media they allege are of “concentration camps” being set up for protesters. The reports appear to be corroborated by leaked audio recordings obtained by Radio Free Europe, in which a senior Belarusian Interior Ministry official can be heard discussing plans for a barb wire enclosed internment camp for demonstrators.

The same security official can be heard instructing security forces to use excessive force against demonstrators.

Another leaked audio recording obtained by the EU Observer appears to confirm that Lukashenko gave a green light to assassinate political opponents and journalists abroad.

Lukashenko has previously accused neighboring states of seeking to annex Belarusian territory, while also baselessly claiming a NATO invasion was being planned. Meanwhile, the Kremlin has also blamed the U.S. for recent protests in Russia.