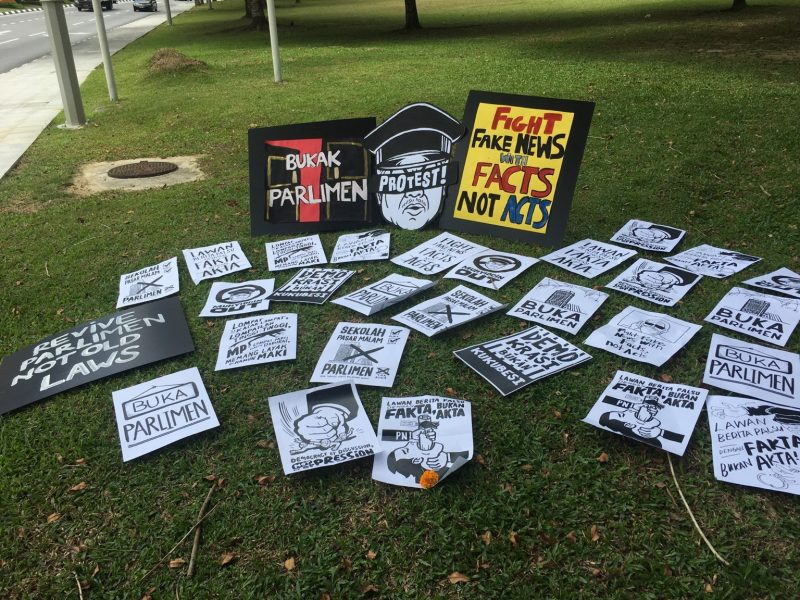 Malaysia’s Emergency (Essential Powers) (No. 2) Ordinance 2021, a measure that criminalizes the publication of “fake news” pertaining to COVID-19 took effect on March 12.

The Perikatan Nasional (PN) government declared a state of emergency on January 12 to contain the surge of COVID-19 cases. But critics believe the PN intended to use it to remain in power since it also suspended parliamentary sessions and banned elections. Activists also warned that the declaration could lead to the suppression of free speech since it allowed authorities to detain citizens and netizens who were “interfering” in the enforcement of health protocols.

Some petitions have been filed in the courts questioning the constitutionality of the declaration. Amid these concerns, the PN released the ordinance criminalizing “fake news.”

According to the ordinance, fake news is any news, information, data or report which is wholly or partly false relating to COVID-19 or the proclamation of the state of emergency, whether in the form of features, visuals or audio recordings or any other form capable of suggesting words or ideas.

The ordinance allows the police to access computerized data, including passwords and encryption codes. It is applicable to all nationalities and even if the offence is committed outside of Malaysia.

Malaysia passed an Anti-Fake News Act ahead of the 2018 general elections but this was repealed by the previous Pakatan Harapan government. The PN ordinance reintroduces certain aspects of the 2018 law.

One of the similarities between the two measures is the vague definition of what constitutes “fake news.” Because of this, the Centre for Independent Journalism has warned that the ordinance could be abused by authorities:

We anticipate further surveillances and invasions of our privacy, arbitrary censorships of critical and dissenting media reports, and thus, attacks on media freedom, and disproportionate crackdowns on legitimate speech such as dissent and misinformation.

Zaid Malek, coordinator of Lawyers for Liberty, reminded the government that a state of emergency is not a license to arbitrarily create legislation. The group also noted that “emergency proclamation” is not defined in the ordinance. It is concerned, too, that the extra police powers undermine the privacy of citizens:

In addition to trampling on the rights to free speech, this Ordinance entirely disregards the right to privacy by allowing enforcement authorities to search any electronic device that they deem “necessary” to complete their investigation.

Human rights group Aliran asserted that “existing laws could easily handle any attempt to create public alarm or unrest.” It also said that the ordinance threatens to create more divisions in society:

To frighten people with such punitive legislation would only create a disconnect between the government and the people. It would muzzle the people while those in government would live in a cocoon.

The think-tank Institute for Democracy and Economic Affairs echoed the earlier criticism that the emergency declaration is intended to silence dissent:

This ordinance strengthens the perception that the state of emergency we are currently in is a smokescreen to curb any form of criticism towards the government of the day. It should be acknowledged that many have provided constructive criticism precisely because they are concerned about the state of the nation and genuinely want improvements.

The member of Parliament for Selayang, William Leong Jee Keen has advice for the government:

The government ought to counter fake news by providing full and complete disclosures supported by scientific evidence on these matters.

Reassurance does not come by burying the truth in the form of heavy and disproportionate punishment for disseminating information.

We have consistently supported any form of fact-checking initiatives, particularly in the current times [of] the pandemic which have seen confusion that arises from sharing of inaccurate information.

On March 14, a group of protesters representing members of the Freedom of Expression Cluster held a flash mob near the parliament to call for the repeal of the ordinance.

Communications and Multimedia Minister Datuk Saifuddin Abdullah assured critics that the ordinance will not lead to censorship.

We will make sure that the action taken is on fake news, not criticism. In matters of democracy, it is possible to criticise but if it involves fake news, then no matter who spreads it, anyone can be hit (receive action).”

He also said that the ordinance is a temporary measure since it can be repealed once parliament has resumed its sessions and six months after the emergency proclamation has been lifted.

This post is part of Advox, a Global Voices project dedicated to protecting freedom of expression online.