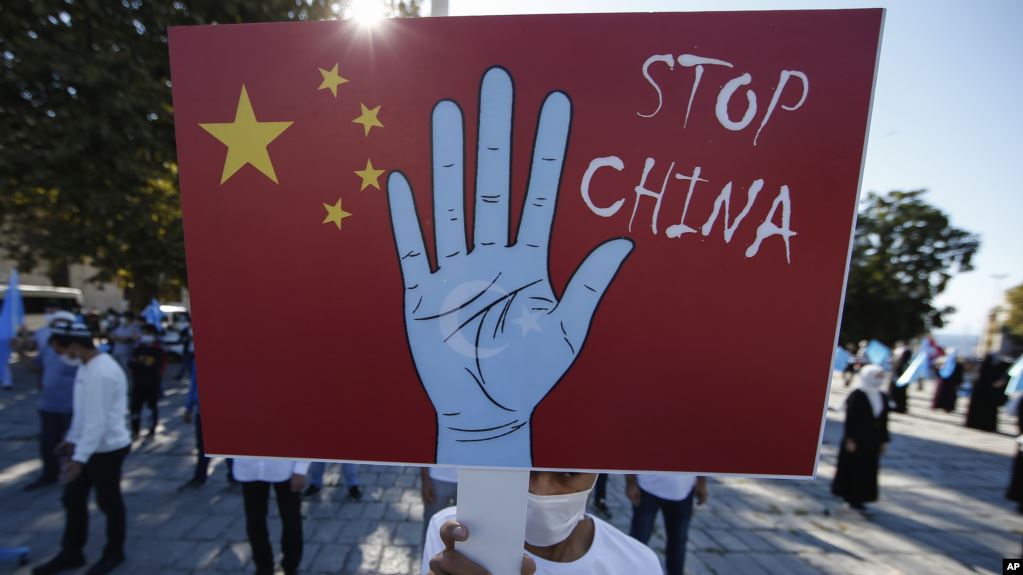 “After careful examination of the available facts, I have determined that the PRC [People’s Republic of China], under the direction and control of the CCP [Chinese Communist Party], has committed genocide against the predominantly Muslim Uighurs and other ethnic and religious minority groups in Xinjiang,” then-Secretary of State Mike Pompeo said.

“Such a thing only exists in the ugly political conspiracies of Pompeo and his like. It has never happened, is not happening and will never happen in China!”

Hua’s claim that evidence of genocide is fabricated is false.

Despite concerted efforts to block outside access to the region, significant evidence has surfaced that China is pursuing population control policies against Uighur Muslims that may fit the legal definition of genocide. And China’s attempts to deflect criticism of its policies in Xinjiang have themselves courted controversy.

As Polygraph.info previously reported on January 7, the Twitter account of the Chinese Embassy in Washington, D.C., tweeted a link to a Chinese government-backed study on demographic changes in Xinjiang.

The tweet repeated the assertion that Xinjiang’s birthrate had decreased because Uighur women had been “emancipated.” It also said the promotion of “gender equality and reproductive health” meant Uighur women were no longer “baby-making machines.”

The study referenced in the embassy’s tweet attempted to counter the work of Adrian Zenz, one of the world’s foremost scholars on the People’s Republic of China who has written extensively about the Uighur’s plight.

Zenz is the author of a widely cited research paper, “Sterilizations, IUDs, and Mandatory Birth Control: The CCP’s Campaign to Suppress Uighur Birthrates in Xinjiang.”

Zenz analyzed Chinese government documents and concluded that “natural population growth in Xinjiang has declined dramatically,” despite official claims to the contrary.

He linked the population decline to sweeping Chinese government campaign to slash birth rates among Uighurs and other ethnic minorities that has included the use of pregnancy checks, forced intrauterine devices, sterilization, abortions and extrajudicial internment for birth control violations.

Zenz argues his findings “provide the strongest evidence yet that Beijing’s policies in Xinjiang meet one of the genocide criteria cited in the U.N. Convention on the Prevention and Punishment of the Crime of Genocide — imposing measures intended to prevent births within the [targeted] group’.”

“The case for demographic genocide and the atrocity is of course based on dramatic [population] declines starting in 2017, draconian sterilization targets for 2019, plus punishing birth control violations with internment, a policy that started in 2018,” Zenz previously told Polygraph.info. “Also, a near-zero birth rate target for Kizilsu prefecture for 2020.”

Leaked Chinese government documents have revealed a 2019 plan to sterilize 14% and 34%, respectively, of married women of childbearing age in two Uighur counties. That project, targeting all of southern Xinjiang — where Uighurs are largely concentrated — continued into 2020 with increased funding.

Critics say this birth control policy is part of a greater drive by Beijing to forcibly assimilate the Uighurs.

To that end, the Chinese government maintains a sprawling network of detention facilities, where as many as 3 million Uighurs and other minorities have been held and reportedly subjected to “brainwashing.”

At first, China denied this system of mass detention existed, even as the evidence mounted.

The Australian Strategic Policy Institute (ASPI) mapped 380 sites in the detention network across Xinjiang using satellite images. ASPI detected a significant ramp up in the number of sites starting in 2017.

Chinese authorities later admitted those facilities existed but characterized them as “people-oriented” vocational institutes and schools.

A senior Xinjiang official claimed the “three evil forces” of terrorism, extremism, and separatism were the driving forces for launching the “vocational education and training program.”

However, leaked government documents known as the China Cables revealed that the camps were intended to be secret and that their features, from guard towers and other security measures to blanket surveillance, meant they were essentially prisons.

Internees have reportedly faced sexual abuse and other forms of torture. Unexplained deaths have also been reported.

Those caught up in the system have been subjected to forced labor, with detainees transferred en masse to work at factories throughout the country.

The massive scope of that forced labor program is only now starting to come to light, Axios reported this month.

Detainees can be held indefinitely, and vocational training only occurs after internees are released into separate facilities.

Despite attempting to justify the camps as an extension of the war on terror, another set of leaked documents, the Karakax List, revealed that Uighurs were being incarcerated for normal religious practices and other innocuous activities.

Numerous reports show Uighurs have been locked up for growing beards, wearing veils, having too many children, going abroad, installing foreign software on their computers, having a passport, or calling people abroad. As noted in the China Cables, a predictive policing program automatically flagged 1.8 million Uighurs for investigation just for installing the Zapya file-sharing app on their phones.

Men have also been imprisoned in greater numbers than women for violating China’s birth control policies. Approximately 60% of detainees are aged 20-40 – a fact that Rian Thum, an expert on China’s Uighur policy at the University of Nottingham, told Germany’s Deutsche Welle has major implications for the country’s demographics. “If you take a portion — or even the entirety — of a village’s youth, you basically put a pause” on the community’s growth, Thum said.

Even those not caught up in the camp system are subject to repression. Human rights campaigners say all of Xinjiang has become an “open air prison.”

A high-tech system of digital and biometric surveillance, checkpoints at virtually every corner, and the policing of individuals’ clothing and hair “are just some of the ways in which residents of Xinjiang experience restrictions on their individual rights even outside these camps,” Jessica Batke, a senior editor with the ChinaFile online magazine and a former research analyst at the U.S. State Department, told the Congressional Executive Commission on China, an independent U.S. government agency, in July 2018.

Religious sites and artifacts in Xinjiang are being targeted, a fact Beijing has tried to cover up. According to a BBC report on mosque destruction in the region, Chinese authorities closed a road to prevent access by journalists.

Technology has gotten around some such obstacles.

Another ASPI study released in September 2020 concluded from satellite imagery that 16,000 mosques, or 65% of the total in Xinjiang, “have been destroyed or damaged as a result of government policies, mostly since 2017.”

In January 2020, Radio Free Asia reported on the so-called “Sanxin Huodong” or Three News campaign, under which Uighurs and other Muslims are pushed to abandon traditional home decor with more Sinicized furnishings.https://platform.twitter.com/embed/index.html?dnt=false&embedId=twitter-widget-5&frame=false&hideCard=false&hideThread=false&id=1272058182672584704&lang=en&origin=https%3A%2F%2Fwww.polygraph.info%2Fa%2Fchina-pompeo-genocide-uighur%2F31064113.html&siteScreenName=SomeAccount&theme=light&widgetsVersion=ed20a2b%3A1601588405575&width=550px

Chinese authorities have reportedly forced some Uighurs to drink alcohol and eat pork, which Islam proscribes.

Zenz argues that the Karakax List reveals “a system of targeted cultural genocide that arguably rivals any similar attempt in the history of humanity.”

It should be noted that cultural destruction does not amount to genocide under the U.N. Genocide Convention.

In December 2019, an EU resolution condemned the mass detention of Uighurs.

In October 2020, the U.S. joined 38 other U.N. member states in condemning China’s abuse of the Uighurs. Later that month, the U.S. Congress issued a bipartisan resolution seeking to declare China’s actions against the Uighurs as genocide.https://platform.twitter.com/embed/index.html?dnt=false&embedId=twitter-widget-6&frame=false&hideCard=false&hideThread=false&id=1313511149934120960&lang=en&origin=https%3A%2F%2Fwww.polygraph.info%2Fa%2Fchina-pompeo-genocide-uighur%2F31064113.html&siteScreenName=SomeAccount&theme=light&widgetsVersion=ed20a2b%3A1601588405575&width=550px

In July 2020, two Uighur activist groups filed a claim with the International Criminal Court (ICC) alleging that Chinese officials had committed genocide and crimes against humanity against the Uighurs in Xinjiang.

On December 14, 2020, the Hague-based court declined to hear the case on jurisdictional grounds, as China is not a signatory to the ICC.

In July 2019, the U.N.’s top human rights body urged China to grant “meaningful access to Xinjiang for independent international observers, including for the UN High Commissioner for Human Rights.”