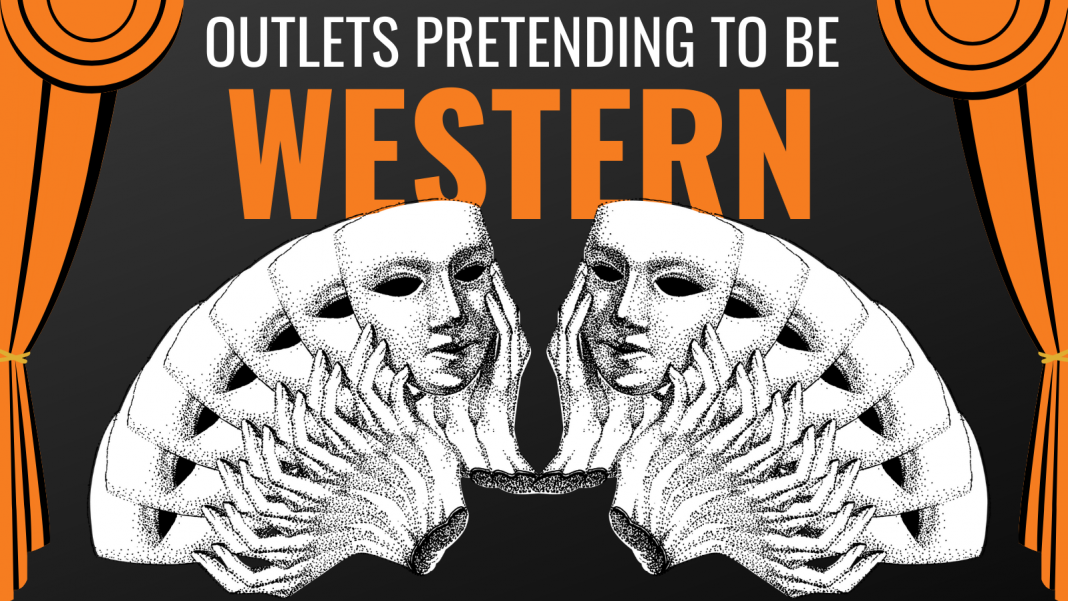 Part 1. Outlets Pretending to be Western

Pro-Kremlin media outlets recycle the conspiratorial musings of sympathetic Western bloggers, falsely implying they are journalists who represent the mainstream views of the West.

Previously, EUvsDisinfo has reported on a common disinformation technique: creating websites and think tanks that present themselves as objective forums for the analysis of international security issues while actually pushing pro-Kremlin narratives. In Ukraine’s separatist regions of Donbas and Luhansk, this tactic has a twist. Russian-speaking outlets translate the musings of sympathetic Western bloggers, publish the results, and then misrepresent these fringe views as the opinions of mainstream journalists in some of the largest European capitals.

Three French-language websites stand out as examples: Les Moutons enragés, Réseau International, and Agoravox. News Guard, a web-based tool that evaluates news portals based on their levels of misinformation, gives the first a low score of 20/100 and the second an abysmal score of 7.5/100. As for Agoravox, a portal original intended to be a forum for ‘citizen media’, it has become what one commentator describes as a ‘hub for conspiracy theories’.

It is possible, however, that the Russian speaking audience is not aware of how dubious these websites are as sources of professional journalism. Inosmi and Ria Novosti, both branches of the Russian state-owned news agency Rossiya Segodnya, routinely publish articles by ‘French journalists’ writing for ‘French media’ who are actually blogging on sites such as Les Mouton enragés. After appearing in the content of an official Russian press agency, an article that originated as a conspiratorial blog was republished in other Russian media sources as a source of legitimate French journalism, known for its high editorial standards.

In particular, pro-Kremlin media often re-publish Agoravox bloggers, a few of whom fought for the separatist regions during the war in Ukraine. Philippe Khalfine was a volunteer soldier in the ‘Continental Unity brigade’ in Donetsk. In 2019, after Inosmi translated and re-published a post he wrote about Crimea, several Russian publications, including News Front, described him as ‘a French journalist from Agoravox who admires Russian Crimea’.

Some bloggers appear to be fake. EUvsDisinfo has written about “The Journalists, Who Exist only on Paper” A similar case is a ‘Patrice Bravo’, who has reposted articles that appeared in Observateur Continental, an outlet that EUDisinfo lab linked to Russian military secret services.

A final example. On 7 July, an obscure blog called Donbass Insider published in French a story claiming that Ukrainian officials were obsessed with the idea that a Russian attack on the country was imminent. (EUvsDisinfo has previously revealed this disinformation tactic.) The post was based on a misleading interpretation of comments by Ukrainian leaders. The blogger went on to say, among other things, that only Western countries invade foreign territories, that Russia never does so, and that Ukrainian leaders are insane and belong to psychiatric wards.

Two days later, the article was translated into English and Russian and published on Inosmi. Immediately, at least sixty-eight Russian outlets, including Rossiyskaya Gazeta, published articles on this story, implicitly presenting the blogger’s views as representative of broader French opinion. Some even added Paris to the blog post’s byline – a detail that did not appear in Inosmi’s original republication – although the writer is based in Donbas.

One outlet, RTVi, noticed that the writer is not a journalist working for a legitimate French media outlet since she holds a DPR passport and started her career working for DONi, the Donbas separatist republic’s official press agency. One Twitter user also pointed out that the pro-Kremlin press often presents the writer, a young woman from France, as representative of French opinion.