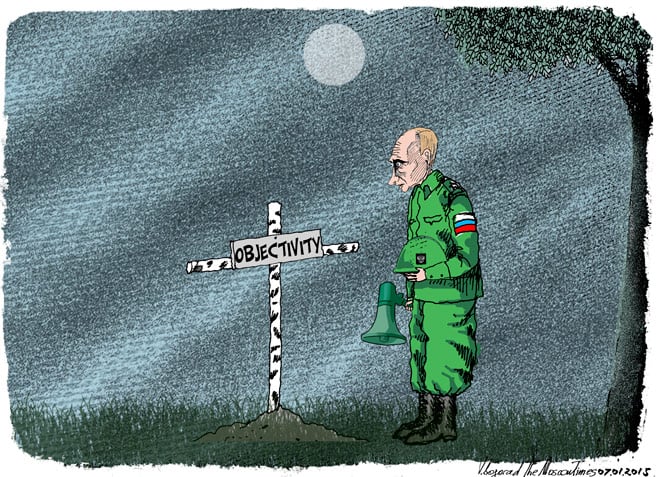 Never mind the old missile gap, what about the meme gap? There is something of a panic in the West that it is “losing the information war” with Russia.

On one level, this may be true, but before the West turns itself into “infowarriors” it ought to consider the weaknesses and consequences of the Russian campaign, whatever its apparent success at seeding its choice of memes — contagious ideas — into wider circles.

The Kremlin is undoubtedly engaged in a multi-front, multi-message, multi-media campaign to undermine the will and unity of the West. Everything from the pre-eminence given tin-hatted conspiracy theorists and deservedly unknown, self-proclaimed “analysts” on RT through to the efforts to demonize figures such as State Department spokeswoman Jen Psaki, speak to this.

But this is primarily a negative campaign. If anything, opinion polls show dwindling trust in and goodwill toward Russia. Pew Research Center surveys, for example, found that between 2013 and 2014, not a single region of the world showed improving perspectives, while negative views of Russia in Europe rose from 54 to 74 percent.

Russia’s aim, though, is not so much to grow its own “soft power” so much as undercut the West’s ability to mobilize its own capacities. At that, it has certainly had some success.

Many NATO members are increasingly worried about the risk of being sucked into a wider conflict. At a time when their leaders are talking about the need for a tougher line, many electorates are uncomfortable. The sharpest indication of this split is in Germany, where most say they would not want to support a NATO partner facing Russian aggression.

The Russian information war has helped hide the ground truths of Ukraine within a cloud of rumor, innuendo, misinformation and spin. Whatever one may think about the “Maidan” protests, the government in Kiev was elected, and is not a neo-fascist junta.

Whatever one may think about the Crimean vote to join Russia, this was illegitimate under international law. The very existence of continued debate on such topics attests to the successes of the campaign.

But let’s not assume it’s all a product of Russian infowar, or that the Kremlin is some grandmaster of the memetic chessboard. These debates also reflect an underlying malaise of politics, leadership and legitimacy in the West.

We are willing to doubt the mainstream not because RT exhorts us to “question more,” but because we already believe our leaders, our power structures and even our media lie to us.

We find ourselves exposed to conspiracy theories and sensationalist nonsense not because of the Russians so much as our own competitive media environments, the speed with which a fun, compelling or exciting lie or half-truth can be reposted, retweeted and re-reported around the world, outdistancing any fact-checking or sober analysis.

To this end, the West is simply suffering from its own internal contradictions. The Russians have been able to exploit them, but they have also often demonstrated themselves to be counterproductively clumsy.

Those troll farms whose “sophistication” is often vaunted by Western alarmists have become a story in their own right — and anyone wanting to present the Russian perspective in an online forum now runs the risk of being taken for one.

While attempts are made to woo German opinion, Russian hackers break into Bundestag computers, probably gaining no more than trivial intelligence, but undoing what good work the media may have done.

In short, neither the Kremlin nor Russian governments should assume that the “infosphere” is a simple battlefield, on which disciplined forces wheel and charge. It is, at best, a cacophonous forum where umpteen rival voices struggle to be heard.

The Kremlin may have a megaphone, but when its message is laughable or offensive, that simply means it can alienate more people at once.

The European Union has announced that it is establishing its “East StratCom Team” to spread its messages within the EU and its “Eastern neighborhood.” But a body currently struggling even to sell itself to skeptical audiences from England to Greece should be cautious about entering into full-blown information warfare.

As soon as such bodies are created, the temptation is to use them to spin and spread messages that shade closer and closer into outright propaganda. This was a mistake made in the early years of the Cold War, before the West realized that the most powerful counter to lies is not other lies, but the truth. The West’s weaknesses are also its strengths: a plurality of opinions, an innately skeptical attitude, a willingness to revisit old assumptions. In the short term they create vulnerability, but in the long term, resilience.

The infamous declaration by Dmitry Kiselyov, prime-time presenter, part-time head of media giant Rossia Segodnya, that “objectivity is a myth that is being imposed on us” could stand as the motto of Russia’s information warfare campaign — or perhaps some day as its epitaph.

By Mark Galeotti, for The MoscowTimes