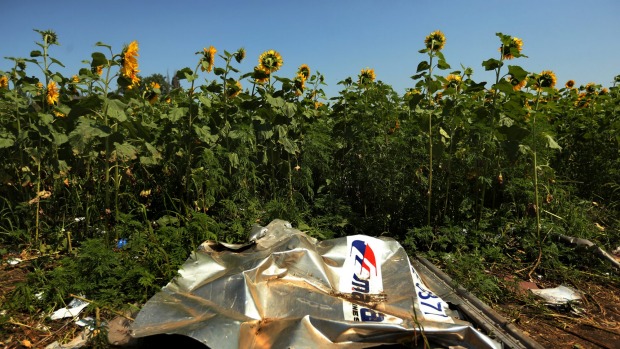 Days after the MH17 crash, independent Russian newspaper Novaya Gazeta seemed to have little doubt as to who was responsible.

“Forgive us, Netherlands,” was the stark headline on the paper’s front page, over an image of the long line of hearses making their way along a Dutch highway..

The official investigation into the crash that killed 298 people continues, with a secret draft report currently being assessed by air crash authorities in Russia, Australia and other countries whose citizens died on Malaysia Airlines Flight 17.

The Western consensus has been that the plane was shot down by a BUK missile fired by pro-Russian separatists (probably because they thought it was a Ukrainian military transport), possibly with the direct or indirect support of the Russian military.

But in Russia when Novaya Gazeta published that headline, it was already a controversial position.

From the start, Russian officials, media, bloggers and supporters pushed out a stream of red herrings, conspiracy theories and alternative scenarios that recur despite repeated rebuttals.

They began on the day of the crash itself, when Russian media RIA Novosti ran a report from a witness claiming to have seen an attack on the plane by Ukrainian fighter jets. That night Russia Today published similar claims from someone purporting to be a Spanish air traffic controller in Kiev.

It was clearly a hoax. The theory that a Ukrainian SU-25 shot MH17 out of the sky has been debunked time and again on technical, physical and logical grounds.

But in some quarters of the internet, you can still find people convinced it’s the truth.

Eliot Higgins, who leads the “Bellingcat” group of citizen journalists who have crowdsourced an investigation into the MH17 crash, says the SU-25 theory has been the most persistent alternative theory.

“The SU-25 theory that gets presented is usually just a hodge-podge of claims, theories, and dodgy ‘evidence’ that is really only linked together by the claim that a SU-25 was somehow involved,” Higgins said.

“Pet theories that stick around, like the SU-25 theory, basically [survive] because the “Ukraine did it” crowd have clung onto it for so long that they’d have to admit they were wrong for the past year, so you end up with a situation where they grab hold of any scrap of information that might support the theory, no matter how unreliable it might be, or if it contradicts their earlier thoughts on the matter.”

Higgins believes the community of “pro-Putin types” watch conspiracy websites and come up with ideas that are then amplified by social media and pushed by official Russian media.

All countries push out propaganda, and few media can convincingly deny a patriotic bias. But Russian propaganda appears to work at a whole other level.

According to a translation by news website Meduza.io, Goldenzweig said there had been a “propagandist mobilisation” on state television in the past two years,  and instructions often came from the presidential administration as to what scandals to highlight and what points to make.

“There is probably not a single topic on NTV right now that isn’t at least somewhat related to the overarching political agenda,” he said. (He also pointed out that Ukrainian TV is the same, only in reverse and “cruder”).

Last August Martin Parker, Professor of Organisation and Culture at University of Leicester, wrote that conspiracy theories such as those surrounding MH17 and MH370 (which disappeared en route from Kuala Lumpur to Beijing on March 8, 2014) are a symptom of our “surge to order”, our desire to see patterns rather than accept mysteries.

They are also hard to dismiss. If you attempt to correct a conspiracy theorist, in their eyes you have become a deluded victim or, worse, a member of the conspiracy – proving its existence by the act of denying it.

This can be the only explanation for one of the craziest theories: the one about MH17 really being MH370, rebadged and loaded with explosives and dead bodies. On the conspiracy scale from the slightly plausible to offensively absurd, this has to rate the highest.