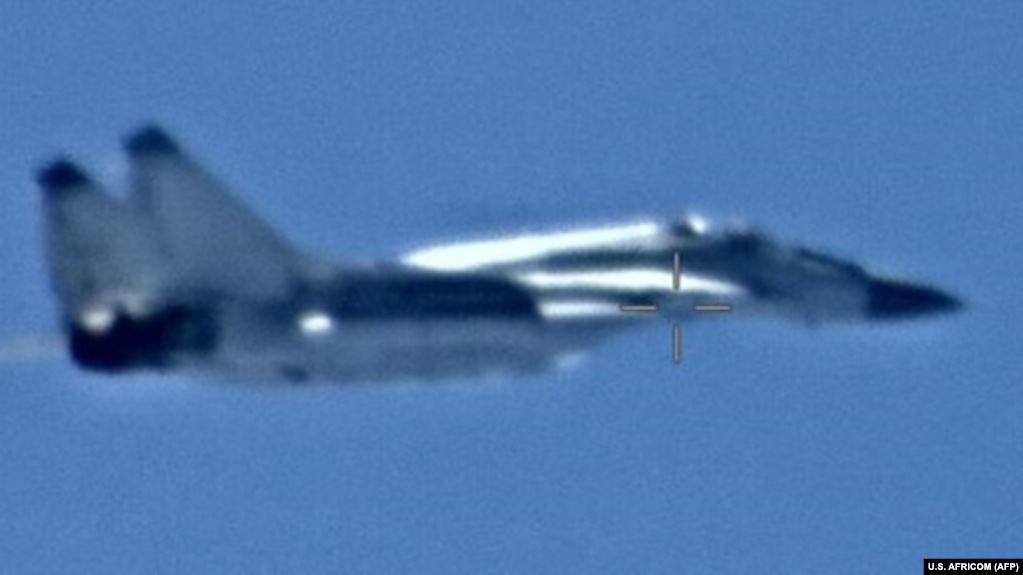 Andrey Krasov
deputy chair of the Russian State Duma’s Defense Committee
“[This is] yet another American scary tale. This is fake and disinformation in the spirit of previous American administrations.” (Responding to U.S. military reports that Russia deployed fighter jets to Libya.)
Source: Regnum.ru, May 26, 2020
FALSE

On May 26, the U.S. Army Africa Command (AFRICOM) said Russia had sent military aircraft to Libya to aid its state-sponsored private military contractors working on behalf of the Libyan National Army (LNA), which is fighting against the United Nations-recognized Government of National Accord (GNA).

“The Russian fighter aircraft arrived in Libya from an airbase in Russia after transiting Syria where it is assessed they were repainted to camouflage their Russian origin,” the U.S. statement said.

AFRICOM did not specify what kind of aircraft were sent or how many, but the U.S. provided images showing various Russian fighter and attack jets in the air and parked at Libya’s al-Jufrah airfield.

On May 27, however, the Pentagon subsequently claimed that Russia had sent about 14 military planes to Libya.

Russia denied the reports, with several top lawmakers issuing strong statements, while neither the Kremlin nor the defense ministry responded by the time of this reporting.

“[This is] yet another American scary tale. This is fake and disinformation in the spirit of previous American administrations,” said Andrey Krasov, deputy chair of Russian Duma Defense Committee.

Reports about Russia air assets going to Libya appeared a week before the AFRICOM’s statement. On May 21, Fathi Bashagha, the GNA’s security chief in Tripoli, told Bloomberg News that “at least six MiG 29s and two Sukhoi 24s had flown into the east from the Russian-controlled Hmeimim Air Base in Syria, escorted by two Su-35 Russian air force jets.”

Commenting on the reported deployment of Russian military aircraft to Libya in his blog, The Aviationist, Rome-based freelance journalist David Cenciotti wrote that he was “not sure this actually happened, at least not the way it has been reported.”

However, in an update to his May 21 blog entry, Cenciotti reported that a satellite image showing one MiG-29 being towed at Al Jufra Air Base had confirmed the presence of at least one such Russian fighter jet in Libya. On May 26, The Aviationist discussed the impact of this development on the power balance in Libya.

On May 21, another confirmation came from Jeffrey Bardin, a U.S. Air Force veteran and a cyber intelligence analyst, who posted on LinkedIn a satellite image of the al-Jawfah airbase, showing “the presence of a MiG-29 fighter and a number of other fighters.”

The Drive, a website that covers military affairs and cars, reported on May 21, 26 and 27 the presence of multiple Russian fighter jets on the airbase in the LNA-controlled territory. The site said the jets “were indeed at Russia’s air base in western Syria just days before the MiG-29 was spotted in Libya.”

Airwars.org, a U.K.-based military aviation watchdog, has been monitoring this situation since May 20, Chris Woods, the website’s director, told Polygraph.info.

“It’s reasonable to conclude that fighter aircraft have recently been supplied to the LNA by Russia,” Woods said. “What remains unclear is whether those aircraft will be flown by mercenaries or by pilots with the Russian air force.”

On May 26, the LNA’s Army Twitter account also retweeted the AFRICOM’s report about the deployment of the Russian aircraft, without denying it.

According to the Russian state-owned news agency Sputnik, an LNA representative speaking on Al Arabiya TV called AFRICOM’s statements about the arrival of Russian military aircraft in Libya “strange.” However, there was no indication the LNA representative denied it had happened.

The United Nations imposed Arms embargo on Libya in 2011.

The civil war in Libya is becoming “increasingly internationalized,” Airwars.org’s Chris Woods said. On one side, Turkey is providing military support to the Tripoli-based GNA; on the other, the United Arab Emirates, Egypt and Russia are backing the LNA forces lead by Khalifa Haftar.

Russia has denied involvement in Libya, but a recently leaked U.N. report said Moscow has deployed about 1,200 mercenaries from Russia’s Wagner Group to strengthen Haftar’s forces.

Central Asian sources report that Wagner has been actively recruiting mercenaries in war-impoverished Syria “using the same tactics as ISIS” – promising big rewards but instead using the new recruits as cannon fodder.

Libya has been in turmoil for the last nine years. The UN estimates that hundreds of civilians have been killed and thousands injured, while millions have reportedly been forcibly displaced and are in dire need of humanitarian aid.