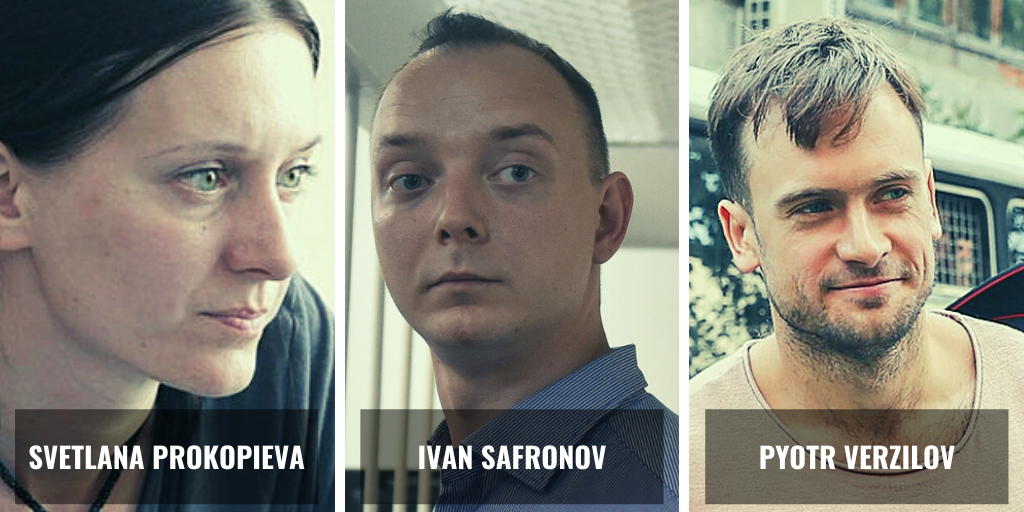 The Kremlin Cracks Down on Journalism

Within the first week since the Russian constitution was amended in a spurious voting process, a campaign against journalists and media has been launched in Russia.

A journalist from a radio station in Pskov in western Russia, Svetlana Prokopieva, was found guilty 6 July by a military court for “justifying terrorism”. On 7 July, a former reporter of the daily Kommersant, Ivan Safronov, was arrested, facing up to 20 years of prison charged with espionage for Czech security service. The same day, the prosecutor demanded 15 years of prison for Yuriy Dmitriev, a historian, who uncovered mass-graves from Stalin’s persecutions. Piotr Verzilov, head of the website Mediazona, reporting on conditions in the Russian penitentiary system, has been detained several times, latest 8 July.

Are these a sign of acoordinated effort to silence Russian media, just days after the Russian president signed the amended constitution? A member of the Russian Parliament’s upper house, Aleksei Kondratiev, compares the campaign against the amendments to the constitution with treason:

[Kondratiev] noted the activity of the “NO” movement, who actively called to vote against the amendments of the Constitution. The senator saw that, despite the pandemic, the movement swiftly opened offices in Moscow, Yekaterinburg, Chelyabinsk, St. Petersburg, Yaroslavl, Kazan, Novosibirsk and other cities: “This tells us about a carefully coordinated operation, financed by certain foreign agencies from Switzerland, Estonia, Czech Republic, USA, France and other countries. Certain accounts of members of the Open Russia Movement were activated. We have this kind of information”, says Kondratiev.

The parlamentarian considers that “new legal forms” should be used against these kinds of actions. “This must be considered not only as ’meddling’, but as actions, undermining the state, treason.”

In Moscow alone, almost 30 persons have been detained in connections with manifestations of support to the arrested journalists.

Journalists and activists, working with the Open Russia Foundation, established by dissident and former businessman Mikhail Khodorkovsky, have been detained, their homes and newsrooms searched by Russian police and security services. A Russian journalist, Igor Yakovenko, comments the situation:

The current rulers take any law in the criminal code and use it to hit any of the enemies. Svetlana Prokopieva – “justifying terrorism”; Yuriy Dmitriev – “sexual acts against minors”; Ivan Safronov – “treason”. What  important is that the law functions as a sufficient heavy blunt object. The absurd charges against Safronov are just as absurd as the charges against Prokopieva and Yuriy Dmitriev, and just as exclusively politically motivated.

Dissent is the core of democracy. The citizens’, right to disagree with authorities, with pundits, experts, politicians, and each other. Our right to express our views and to call the bluffs, to expose the lies. The fight against disinformation is an act of defiance against those, who lie to achieve political goals.

Authoritarian systems are based on loyalty, on submission to the party line, to the Master’s Voice. A statement is true, not because it is fact, but because it is in the interest of the Leader, the Party, the Cause…

EUvsDisinfo is occasionally accused of “censorship” whenever we address disinformation by the Kremlin or its proxies. As if highlighting verifiably false statements would constitute “censorship”. Pro-Kremlin channels like South Front, The Saker, RT and Sputnik pretend to be martyrs, victims by “The Matrix”, “The NATO”, “The Anglo-Zionist Empire”… whenever EUvsDisinfo and independent fact-checkers point at their false claims. In the Kremlin world-view, freedom of expression is the freedom to spread deception without being challenged.

No one stops the Kremlin from spreading lies. Occasionally, national European governments, journalist unions and NGOs act against RT, Sputnik and other pro-Kremlin channels. There are, after all, standards of professionalism in journalism. British media regulator Ofcom fined RT, after failing to comply with the standards of public broadcasting, violating rules requiring due impartiality. Latvia have forbidden RT to broadcast, as the channel is managed by Dmitry Kiselyov, who is subject to individual restrictive measures, imposed by the European Council in 2014. Lithuania has introduced a similar ban. Will it impede the access in the Baltic states to RT lies through the satellite or web? No.

RT, Sputnik and other pro-Kremlin channels are all parts of the information landscape of the world and of Europe. Their rights to broadcast anything they want is secured by principle of freedom of expression and constitutions. As is the right to expose  the lies they tell. The EUvsDisinfo Database on Disinformation contains over 9 000 cases of lies, deception and fabrications. Both RT and Sputnik are frequent contributors to the database.

It is understandable that it is unpleasant to have ones lies brought out in the daylight. Disinformation operatives do not like when their false stories are exposed. But are they censored? Are they charged with treason? Do they risk prison in Europe? No, no and No. It is definitely harmful for society at large, but still legal to lie in Europe. The liars might at worst risk to endure the embarrassing or occasional fines. For any liar, experience of having their lies disclosed is not a comfortable one, but that is not really a martyrdom.

The Kremlin has reacted very strongly to criticism towards the crackdown on journalism. The US Embassy in Moscow expressed concern with the arrest on Safronov and others. Russia’s Ministry of Foreign Affairs replied curtly:

Mind your own business

The Putin regime has, in its 21 year, become entirely contradictory to individual freedom and dignity. Those are in today’s Russia crimes, punished with either long-term incarceration or death.

Article 29 of the Constitution of Russia guarantees the right of every citizen to express their opinion. The crackdown on journalism is an attack on the people’s fundamental freedoms.