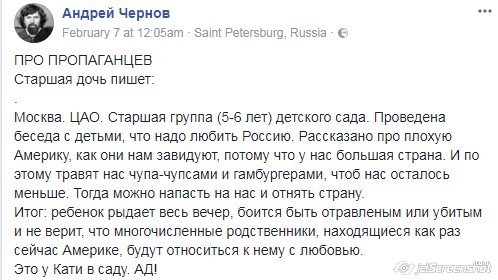 In what is a clear violation of Russian law but fully in line with Kremlin policy, kindergarteners in Moscow are being taught to hate America and to ignore any relatives they may have living there about what life is like in the United States, according to Andrey Chernov.

On his Facebook page, the Russian blogger reports that his “older daughter writes that in Moscow, in the older group (aged 5-6) of a kindergarten has been conducted a conversation with children that it is necessary to love Russia. The children were told about how bad America is, how its people envy us because we are a big country. And therefore they [do what they can] so we will have less and less.”

“Then it will be possible to attack us and take the country away. The result of this: Our child is crying all evening, fearful of being hurt or killed and will not believe that her numerous relatives already living in America will relate to her with love. This is what Katya has in her kindergarten. A HELL!”  (facebook.com/aychernov/posts/1249044688528542, also in newizv.ru/news/society/08-02-2018/uzhe-ne-smeshno-v-moskovskih-detsadah-uchat-nenavidet-ameriku).

It is unclear whether this is a concerted policy that the schools have imposed on teachers from above or an overly enthusiastic teacher exceeding her brief with her young charges.  But it is clear from this that many in the Russian capital don’t see the current conflict with the United States as temporary but rather as a permanent clash of good and evil.

To the extent that young children are inculcated in this belief, it will be ever more difficult for Russia to change and for its government, even after the ultimate departure of Vladimir Putin, to cooperate with others beyond the most superficial level.  Children taught to hate do not soon forget that lesson.

For all people of good will, this is not just a tragedy: it is a crime.