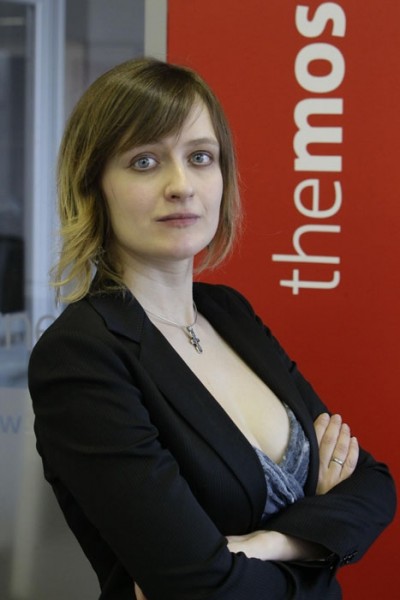 A journalist and playwright with a complex national identity, Natalia Antonova was born in Soviet Ukraine, has roots in modern-day Russia, and was raised in the United States. Today, her time and mind are split between Moscow and other places. In addition to freelancing for newspapers like The Guardian and writing a column for The Moscow Times, Antonova maintains a personal blog, which she updates once or twice a month, publishing personal reflections on world events and breaking news. Antonova’s past and identity are far from simple, and the uncertain future of Russia and Ukraine promises a tomorrow as complicated as today.

Nevena Borisova (NB): What would you say about your identity? How do you situate yourself?

Natalia Antonova (NA): I was born in Ukraine, I grew up mostly in the US, but Russian was my first language and I have Russian heritage. I think I’m really lucky to exist at this intersection of cultures. My complicated identity tends to annoy people who wish to place everyone they encounter into a particular box, but I say, screw that. I like having a lot of different “homelands.”  I like being exposed to competing opinions and ideologies, even if they sometimes make me uncomfortable.

NB: Drawing on your dual experience as a journalist and playwright, how would you describe the “Russian soul”?

NA: I don’t really believe in the notion of a “Russian soul.” I think it’s an outdated and annoyingly sentimental concept, especially since the Russia of today contains so many different cultures. However, I think there is definitely something about the unpredictability of life in Russia that impacts the way the majority the population lives their life. The absence of a flexible, dynamic political system feeds into this, too. I think a lot of people on the outside don’t really understand Russia in this context. This means that interactions with the country, both from individuals and governments, tend to break down.

NB: And how does your playwriting relate to your journalism?

NA: I write plays about people—real-life stories. A lot of them have plots that I pick up during the course of my work as a journalist, but there is always a dose of unreality in all of them. I think the human brain processes life really strangely at times—and I also think (since I’ve gotten into science journalism especially) that there is this really cool, intricate, oftentimes unfathomable design to the universe—and I think in all of the work that I do, I aim to deal with my own emotions on this weird subject. And I process those emotions through my characters.

NB: The Russian-American filmmaker Andrei Konchalovsky has said that Russia is good at building colossal projects, like space rockets, but not so skilled at day-to-day production. Do you agree?

NA: I think Andrei is right. Successive Russian governments have always been too preoccupied with these hazy notions of “greatness” to make everyday life in Russia as comfortable as it is in the West, and ordinary people have internalized this same preoccupation.

There is a historic context to this, as well. Russia simply didn’t develop as efficiently as Western countries did. Everything from the Mongol invasion to Russia’s harsh environmental climate has been a factor here. When your country is confronted with examples of day-to-day life being better elsewhere, you tend to want to compensate for that. This is why you meet so many people who couldn’t care less that the roof of their child’s school is leaking, but take a lot of pride in their country’s huge nuclear arsenal. It may seem irrational, but it’s actually quite self-explanatory in the wider context.

Today, the idea of a comfortable life in Russia is being treated with suspicion, because a lot of the people who turned out for the 2011-2012 protests in Moscow were at least nominally middle-class. In the eyes of some Russian officials, these people got “too comfortable” and started getting fancy ideas about democracy and accountability. How dare they!

NB: How would you describe life in Moscow nowadays? What about life outside the capital?

NA: The average Russian, both in Moscow and outside Moscow, are busy getting by, just like they have always been. Obviously, it’s tougher now, since the ruble has taken such a dive. But hey, that’s the brave new world Russia lives in. In this world, television provides much comfort and assurance, although I was stunned to read recently that the number of Russians who believe everything that’s reported on television is 59 percent (up from 47 percent in 2012). To be honest, I thought that number would be even higher today.

NB: How do you find living in Moscow?

NA: I don’t spend all of my time in Moscow nowadays, but whenever I’m back, I like to visit with fellow theater folk and go to cheap little cafes downtown to write and people-watch. I’ve been paying a lot of attention to the way that Russian cuisine has been forced to evolve since the sanctions and counter-sanctions hit. It’s been quite interesting. A lot of business have been forced to get very creative. And I’d also like to mention that in spite of all the recent political awfulness, there are a lot of people doing a lot of good work here: hospice doctors, disability rights activists, environmentalists, and so on. So I like to catch up with what’s happening on those fronts whenever I’m in town.

NB: What about the freedom of the press in Russia? How do you see the situation?

NA: I think the country would be better off if it had a healthy, vibrant, and free media market, but such a market would also require more official accountability, and Russian officials are too paranoid to see how accountability could actually be a good thing. They prefer a less flexible system, forgetting that rigid systems are ultimately more brittle and fragile.

There is this great saying that perfectly characterizes their mentality: “You die today, and I’ll die tomorrow.” It’s all very stark, desperate, and based on the expectation of violence. I think it’s the direct result of Russia never quite dealing with the trauma of the 21st century—from the Terror and millions of deaths in WWII (some of them the result of official incompetence—even Stalin admitted as such, and actually thought he might be arrested after the war was over), to the Gulag and the horrific quagmire in Afghanistan. The list goes on. A traumatized society doesn’t want to know the truth about itself. This is why both Russian politicians and ordinary Russians insist that a free, robust media market is a bad thing.

NB: How has the conflict in Syria affected the situation in Ukraine?

NA: I think that Russia has shifted its attention to Syria in pursuit of that glory stuff that I’ve already mentioned. Russia wants to sit at the big kid’s table in relation to the global policy, hence the Syrian gamble. Who knows how that will turn out? What we know is that less attention is now being paid to Ukraine, which, for Ukraine, is a good thing.

NB: And how does this affect present relations between Russia and Ukraine?

NA: Of course, the political relationship is completely broken down between Russia and Ukraine—but business relationships continue to exist. That’s because money matters to the people involved so much more than politics. And maybe money will eventually normalize relations between the two countries, though it could take decades (and a lot of changes with Russia), at this point.

NB: What about Ukraine itself?

NA: I’ve stopped making predictions about the conflict in east Ukraine, because whenever I do, some horrible new twist happens. (Honestly, I’ve become superstitious about it.) I think Ukraine itself needs to find its own way—by strengthening democratic institutions and passing more reforms and making them stick. It’s going to be a lengthy, oftentimes thankless, task, but it’s do or die at this point.