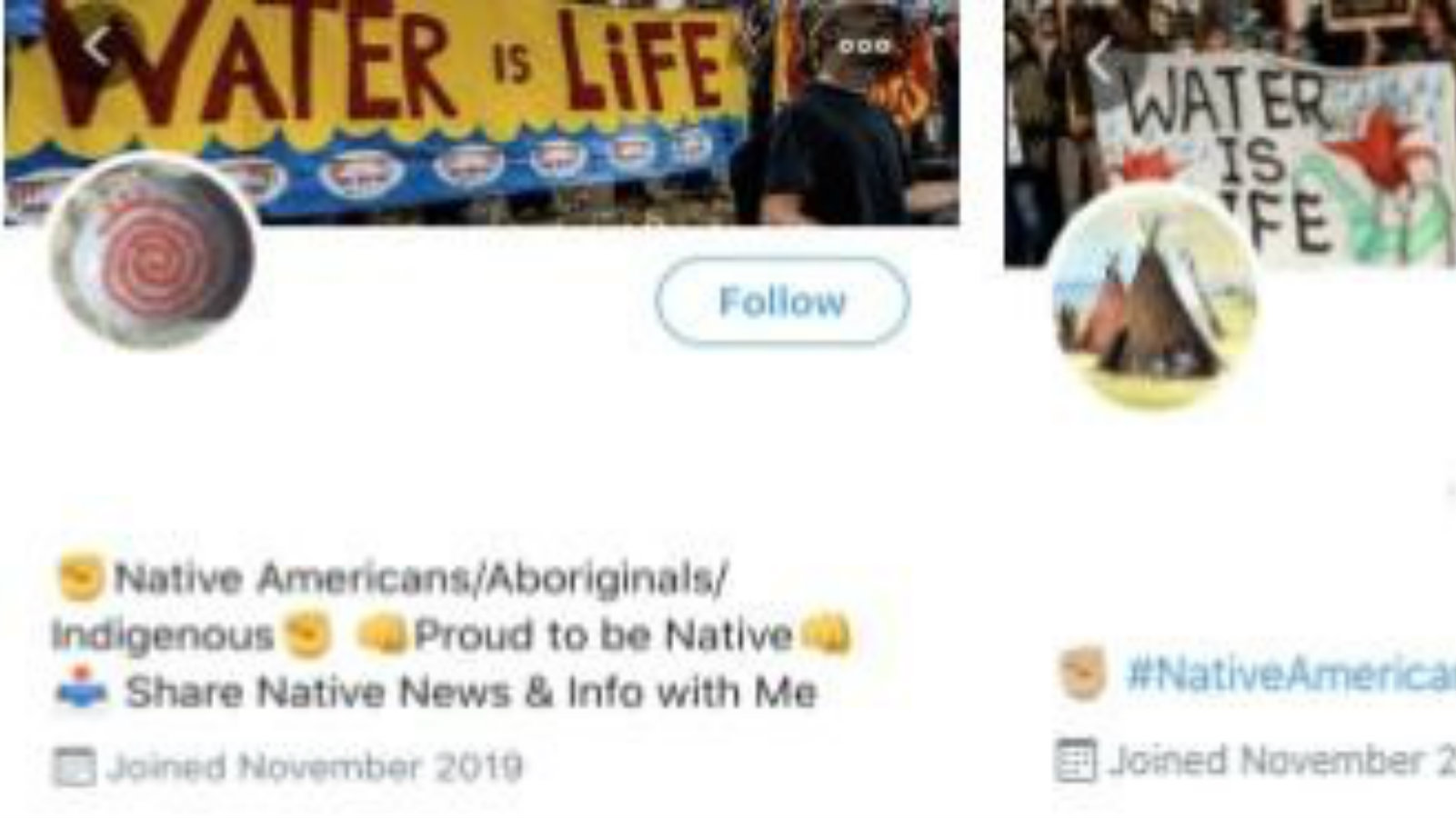 Disruptive social media accounts are appropriating images related to Native Americans and exploiting them through computational propaganda. Online accounts are weaponizing Native names and concepts to create divisive content to troll politicians and promote a particular political agenda. This online propaganda is likely influencing electoral participation, encouraging social division, and inflaming protests. Despite the growth of this type of content, research has been limited to Native American social media use and not possible exploitation. The normalization of racism against Native Americans has possibly contributed to this propaganda going unnoticed within society.

Collected data identified social media accounts appropriating the identity of Native Americans (native names, clothing, imagery) to portray political actors in a negative light. Native identity was used in political propaganda attacking Elizabeth Warren’s first political campaign. The propaganda aimed to ridicule her by labelling her a fake. The online weaponization of Native identity began in May 2012 and has resulted in ceaseless political attacks, various derogatory hashtags (e.g., #Fauxcahontas, #Liewatha, #MeSioux), and racist memes such as:

Media outlets such as Breitbart and FOX News, as well as comedians, have also mimicked the trolling and used it for laughs. While Senator Elizabeth Warren was the initial recipient of the weaponization of Native identity for political propaganda, the association of Native identity with being fake has resulted in trolling of President Donald Trump with the hashtag #Brokeahontas in order to convey the message of him being a fake billionaire. Media figures have also mimicked the trolling by using this hashtag for laughs, e.g., Bill Maher, resulting in a worldwide Twitter trending topic.

Using the analyzation tool Hashtagify, the utilization of hashtags surrounding politicians Senator Warren (#fauxcahontas) and President Trump (#brokeahontas) can be analyzed with the following insights:

As the US presidential election speeds up and social media polarization increases concurrently, new Twitter accounts have emerged that exploited content about economic resources of Native Americans. The majority of these accounts were created in the last month and hardly engaged with other accounts. But posted daily on Native American identity and their economic resources. Frequent hashtags used by these accounts included: #StandingRock #NativePride #NoDaPL #FreeLeonardPeltier #Lakota #Mniwiconi (meaning ‘’Water is Life’’ in Lakota, which  is a ‘’national protest anthem’ to fight for Indigenous resources’). Their profiles looked like this:

Previous research has identified that Far-right European groups have been appropriating Indigenous identity to promote an anti-immigration political agenda. Their memes promote the idea that immigration should be seen as a threat to the survival of the majority White population while exploiting Indigenous identity to convey their message. They claim that their land must be defended or they might suffer a future similar to that lived by the Native Nations, whose populations suffered severe decimation through European migration. Slogans displaying this behavior include: ‘’The Indians couldn’t stop immigration. Today they live on Reservations.’’ Similar slogans are disseminated across various social media platforms, including Twitter, Pinterest, Facebook, and display images such as this:

As migration has become a dominant debate topic, this issue is particularly problematic for cross-border tribes whose land encompasses the United States and Canada/Mexico border.

Politically influencing Native Americans might have a greater electoral impact in 2020 compared with previous elections. The promotion of derogatory political hashtags that reference Native American names and concepts with photos of politicians might suppress political participation from these populations. The motivation behind this computational propaganda might be to ultimately discourage support for certain candidates. Native American voters, especially on Reservations, tend to vote Democratic. Thus, elections in Nevada and the state of Arizona could be influenced through Native voters being exposed to propaganda.  Further data analysis must also investigate tools for Native Nations to create counter-narratives. Cyber security services and funding must also be available to help Native governments defend themselves as political propaganda exploits their identity and seeks to polarize online political discussions.