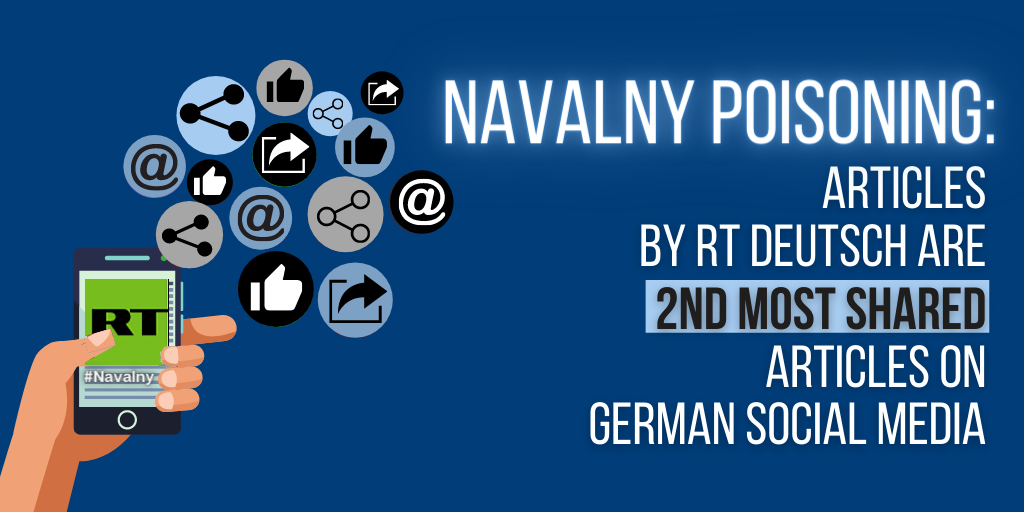 Articles by RT Deutsch are the second most shared articles on German social media. If it was not for one German reliable media outlet, Der Spiegel, Kremlin-owned outlets would dominate the German digital information space in both: number of articles published and social engagements received.

Last week’s Disinformation Review demonstrated the striking similarities between disinformation messages spread in the Skripal and Navalny cases. In a 2018 review of the most–shared articles on social media regarding the Skripal case, DFRlab found that “content from Kremlin-owned and pro-Kremlin media outlets far outranked mainstream and independent media on audience engagement statistics.” That means articles from these outlets containing narratives that deny the involvement of the Russian Government in the poisoning of Sergey Skripal received more engagement and in consequence wider distribution on social media. “The low-cost, high-impact nature of social media makes it a useful medium for the Kremlin’s war of narratives”, which, according to DFRlab’s findings, Russia was winning.

Fast forward to 2020, EUvsDisinfo repeated the research on the share of pro-Kremlin communication in the information environment regarding the Navalny poisoning. How did pro-Kremlin media do this time?

Between 14 August 2020 and 14 September 2020, about 9 400 articles on Navalny or Novichok were shared on social media in English with a total of over 4 million social engagements across Facebook, Twitter, Reddit and Pinterest – according to social analytics tool Buzzsumo:

The development of coverage over time shows that the peaks in number of articles and social engagements coincide with the major events since Navalny was poisoned: 20-21 August when the initial news broke and 2 September when Germany officially announced that Navalny was poisoned with Novichok.

No pro-Kremlin or Kremlin owned outlet was within the top 15 most engaged with outlets publishing in English. Contrary to 2018, not one article by any such outlet even made it in the top 100 most engaged with articles. This was not for a lack of trying: four Kremlin affiliated outlets were among the 15 outlets that shared the most articles.

In the same period, almost 3000 German articles on Navalny’s poisoning have been published, accumulating over 680 000 social engagements. In the German information environment, more articles were published after the German government confirmed the poisoning on 2 September.

Kremlin owned RT Deutsch as well as Sputnik German were the second and third most active outlets publishing in German on the Navalny case, only topped by Spiegel. Both outlets also managed to be within the top 15 most engaged with ones. Articles by RT Deutsch were the second most shared articles on German social media. If it was not for one German outlet, Spiegel, Kremlin-owned outlets would dominate the German digital information space in both: number of articles published AND social engagements received.

A closer look at the most shared articles paints a general picture of two media worlds: while German media shares updates on the story in a neutral tone, pro-Kremlin outlets and alternative blogs shared more confrontational, judgmental and distracting headlines.

Only two articles by RT Deutsch are directly in the top 10, both quoting interviews with German politicians in other newspapers and frame them according to their stance: a Putin critical interview with German defence minister Annegret Kramp-Karrenbauer (“AKK”) is described as “shrill” and “lacking evidence”, while an interview with Sarah Wagenknecht from “Die Linke” (The Left) party amplifies allegations of double standards of the German government with regards to Saudi Arabia and the US.

We do not see a dominance of pro-Kremlin or Kremlin-owned outlets in Germany in 2020 compared to 2018 and the Skripal case. But we can observe clear attempts to continue the strategy to “dismiss, distract, distort, and dismay” by pro-Kremlin and alternative channels.

The 16th most shared article in German (by RT Deutsch on 3 September) for example claims in its headline that an “Analysis of Navalny samples with a US mass spectrometer did not reveal any evidence of toxins”. While the article clarifies that the analysis happened in Russia, the headline may mislead readers to think an independent analysis took place. Numerous shares on Twitter used the short article as proof of a conspiracy against Russia.

More prevalent than dismissals in the German information environment however seemed to be the “distract” approach. By linking unrelated topics together or by employing whataboutism, authors seek to channel the discussion in a different direction than the topic at hand. In one tweet a RT Deutsch journalist used Navalny’s flight to Germany to remind of Julian Assange’s case. In another, RT Deutsch’s “Chief Strategy Officer” wants his readers to rather focus on missing person cases in Ukraine.

Neither of these two examples by individual contributors to RT Deutsch show in the charts above, yet with over 100 retweets each, they also contributed to the strong influence and stand of pro-Kremlin narratives in the German information environment.