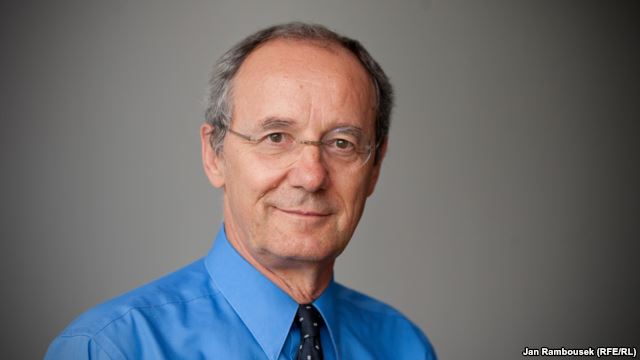 On Friday, March 18, around 7 p.m., my colleague was waiting in her apartment in downtown Moscow for a delivery from a nearby grocery store. When her doorbell rang she opened the door.

But instead of groceries, there were two men claiming to be from NTV, a Kremlin-controlled television channel, who assailed her with aggressive questions about her income and alleged property holdings. When she refused to give them an interview, one of the men told her:

“I got an assignment to ask you these questions!”

On Sunday, March 13, the Rossiya 1 TV channel devoted 7 minutes of its prime-time show to RFE/RL. According to them, RFE/RL is a primary tool of U.S. propaganda; it is the “headquarters of a new cold war” and it is the “drafting center for soldiers of that war.”

The assignment seems to have also been issued in Kazan, where Russian ultra-nationalists created a special group on Facebook to monitor RFE/RL’s Tatar-Bashkir postings, accusing us of being a U.S. tool to break up “Greater Russia.”

I anticipate that Russian state-controlled media, ultranationalists, and others who seek to control the Russian people will continue feeling as though they have these assignments to lie and harass. But what they have not anticipated is that more such assignments bring more audiences to RFE/RL. Our Russian language service increased its audience by 42% in December 2015 compared to December 2014. RFE/RL Russian language sites attracted 170 million visits last year; and in the last year, in Russia alone, we registered more than 23 million engaged users on Facebook.

But Russia is not the only country that threatens RFE/RL journalists or seeks to suppress our work. In Azerbaijan and Turkmenistan our journalists are in prison; in Pakistan they have been kidnapped. In Afghanistan, we received death threats from the Taliban; in Central Asia from Islamists. My colleagues from Crimea had to leave the peninsula. Our camera devices were taken from us in several countries. RFE/RL websites are blocked in Chechnya and Tajikistan. Our family members and relatives have been harassed across the countries of our broadcasting region.

Many in power are seeking more control over their citizens. But, the more control they seize, the more their people seek out alternatives. Last year RFE/RL’s digital entities received more than 430 million visits (70 million more than a year prior), and more than 115 million Facebook users communicated with RFE/RL (double the amount in 2014)!

And this does not even include audiences on radio, TV, newspapers, YouTube, Vkontakte, Twitter, WhatsApp, and the many other platforms where audiences seek out our original reporting on the economy, corruption, wars, extremist recruiting, migrant issues, local electoral practices, and human rights. If RFE/RL was not having success, rulers likely would not be taking these steps against RFE/RL, or at least not to the extent that they are doing lately. These attacks confirm the success of RFE/RL in carrying out its mission. The more bans and criticism we get, the better we are.

We set the record straight; we do not kowtow to tyrants, and for that audiences trust us.

RFE/RL does not take sides. We are not in the business of convincing, but rather our assignment is to inform. We do not have a license to lie, to harass, to label — and we do not send reporters on such assignments. We will never send men to harass someone in her apartment late at night. That type of assignment is deplorable.

It is not our mission to change power structures in Russia or anywhere else.Our job is to offer audiences in Russia the truth — for example, the fact that these attacks on RFE/RL are just one part of a massive intimidation campaign. One by one, the voices of academics, scientists, minorities, migrants, activists, parents, teachers — in other words, the voices that contribute to healthy social dialogue in all functioning democracies — are being silenced, often brutally.

Our job is inform audiences that RT (formerly Russia Today), for example, operates freely in Western countries but RFE/RL and other international media organizations are unable to deliver content on popular platforms in Russia. We had 36 FM affiliates when Putin came to power and today we have none. No chance to get on cable TV. Sometimes, we are blocked by law, sometimes by arbitrary enforcement of regulations, sometimes by intimidation of media outlets that would wish to air your content. The ban on our content on popular platforms shows that what we are doing matters and rulers know this. Our job is, as well, to inform audiences about a new wave of Russian dissidents, who are dissatisfied with this crackdown on freedom of expression.

It is up to Russians to decide whether they like it or not; and whether they want diversity and pluralism, or a society with only one voice in the room — that of Vladimir Putin.

We are there to show a possible choice to the audience; it is their decision to make that choice.