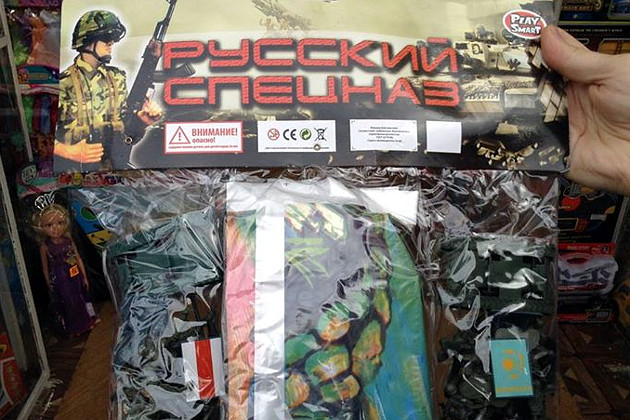 There was an old Soviet joke about the definition of socialist internationalism. One of its numerous ugly versions had it that this was shown when a Russian, a Ukrainian and an Armenian got together to beat up a Central Asian. But now there is a real world version of this, one that reflects the latest update of this kind of “internationalism.”

On the By24.org portal yesterday, Belarusian journalist Vladimir Chudentsov reports that a group of Belarusians has discovered that the video game, “Russian Spetsnaz,” is now on sale in the Ukrainian capital even though it calls on its players to kill Ukrainians and other non-Russians. The Belarusians who discovered this were surprised not only because at a time when Russians are attacking Ukraine, such “Russian military propaganda” is freely on sale in Kyiv, but also because the existence of such games shows to what lengths some Russians are prepared to go to teach their children to hate other peoples.

The game included the flags of countries those playing the game could use as enemy forces. Among them in addition to the Ukrainian flag were those of Kazakhstan, the historic white-red-white flag of Belarus, the United States, Great Britain, France, Portugal, the Netherlands, Iraq, and Uzbekistan.

Chudentsov points out that “Russian Spetsnaz” wasn’t produced in Russia itself That country, he points out, “already for a long time has not been capable of producing anything except oil, gas, and military aggression.” Instead, they were produced in China on orders from Russian businessmen.

Such “internationalism” is disturbing enough. What is perhaps worse is the language accompanying the games produced by China’s Play Smart Company. It specifies that “these games give the child the chance of understanding the world around him,” improving his “intellectual and physical health, his communications skills and his success in school.”

by Paul Goble, Window on Eurasia