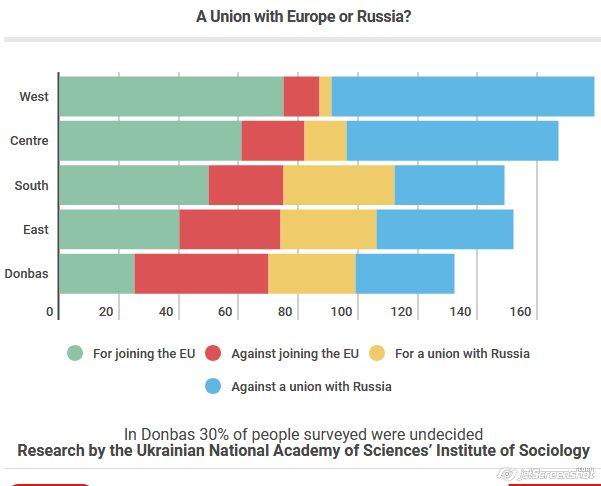 Since 2014, Ukraine has lived through the most difficult period in its 26 years of independence. Ukrainians have experienced revolution, political transformation, war, internal displacement, and economic collapse. But how have these events changed their views of their country, its future, and the world?

Hromadske set out to answer this question by examining changes in Ukrainian public opinion. To do this, we compared the results of a sociological survey conducted in June and July with similar surveys from previous years.

We based our analysis on reports from the “All-Ukrainian Public Opinion Survey,” carried out by the GfK Ukraine market research firm on behalf of the International Republican Institute (USA), and the “National Population Survey of Ukraine,” carried out by the Ukrainian National Academy of Sciences’ Institute of Sociology in cooperation with the “Intellectual Perspectives” charitable organization. The surveys were conducted in all regions of Ukraine, except for annexed Crimea and the occupied territories in Donetsk and Luhansk regions.

Looking to the Future

This year, surveys show that Ukrainians increasingly believe their country is changing for the better and they are more optimistic about its future.

According to the Institute of Sociology, in 2017, the main feelings Ukrainians experienced while thinking about the state’s future were hope (47%), anxiety (35%), optimism (21%), and fear (17%). A sense of hope prevailed in all regions (especially in the South); anxiety also ranked second in all regions, apart from in the West, where optimism took second place.

When thinking about their own futures, the most common feelings Ukrainians had were also hope (47%), anxiety (30%), and optimism (26%).

A similar GfK study asked people in which direction they thought Ukraine was moving. This year’s survey shows a slight increase (5-7%) in the number of Ukrainians who think the country is moving in the right direction. However, it was still a minority opinion. As of June 2017, 18% said Ukraine was moving in the right direction, 68% said in the wrong direction, and the rest answered “difficult to say.”

According to the surveys, most of the population supports closer ties with Europe. The Ukrainian tendency to have a positive attitude toward European integration and a more negative view on forming an alliance with Russia began to grow in 2014. It continues to this day.

Public attitudes towards Ukraine joining the European Union have also improved significantly. In 2013, only 42% viewed this positively, compared to 52% in 2014 and 54% in 2017. However, it should be noted that views on this issue continue to vary by region of the country.

A Union with Europe or Russia?
Infogram

The GfK study results also show that pro-European attitudes are growing. According to the latest data, 54% of Ukrainians favour the European Union — the highest level since May 2013. The report also provides data on the Ukrainian public’s attitude toward individual countries: 58% relate positively to Poland, 50% to Latvia, 49% to Germany, and 47% and 50% to the USA and Canada, respectively.

Since 2014, attitudes toward Russia have also worsened significantly. From February and September 2014, the proportion of the population with negative views on Russia rose from 19% to 66%. Today, this figure  stands at 51%.

How would you vote now in a referendum on Ukraine joining NATO?
Infogram

It’s not all hope and optimism for the Ukrainian people. For the majority of Ukrainians, economic instability and fear of an attack from external enemies remain serious concerns. These worries prevail over other issues, likes fears of rising crime rates.

According to the GfK study, the majority of Ukrainians consider the main challenges facing the country to be corruption in state agencies (51%) and the war in Ukraine’s east (50%). Low industrial output and unemployment  — at around 29% each — are lower priorities. Interestingly, issues on a personal level differ from those on a state level. Ukrainians named the rise in prices (44%), the ongoing war in the east and unemployment (around 34% each), social security (31%), and corruption (30%) to be their most pressing personal issues.

However, public dissatisfaction with the economic situation — both on the personal and the state level — continues to decrease, albeit slightly. The proportion of people surveyed who emphasize the severe deterioration of Ukraine’s economy over the years stands at 35% as of June 2017. Compare that to September 2014 and June 2015, when the figure stood at 57% and 60%, respectively.

People’s dissatisfaction with their own family’s economic situation has also decreased. This year, only 34% emphasize this issue, compared to 40% in 2014 and 55% in 2015. As for the future, 26% of respondents felt the economic situation would improve next year. But 23% thought it would change for the worse.

What do Ukrainians fear in 2017? The Institute of Sociology’s survey shows that the rise in prices (77%), unemployment (61%), and non-payment of salaries and pensions (63%) are top contenders.

But these fears have weakened over the last three years. Although fear of an external attack remains relatively high (38%), fears of international conflict, mass public disorder and state failure have decreased — to 17%, 21%, and 28%, respectively.