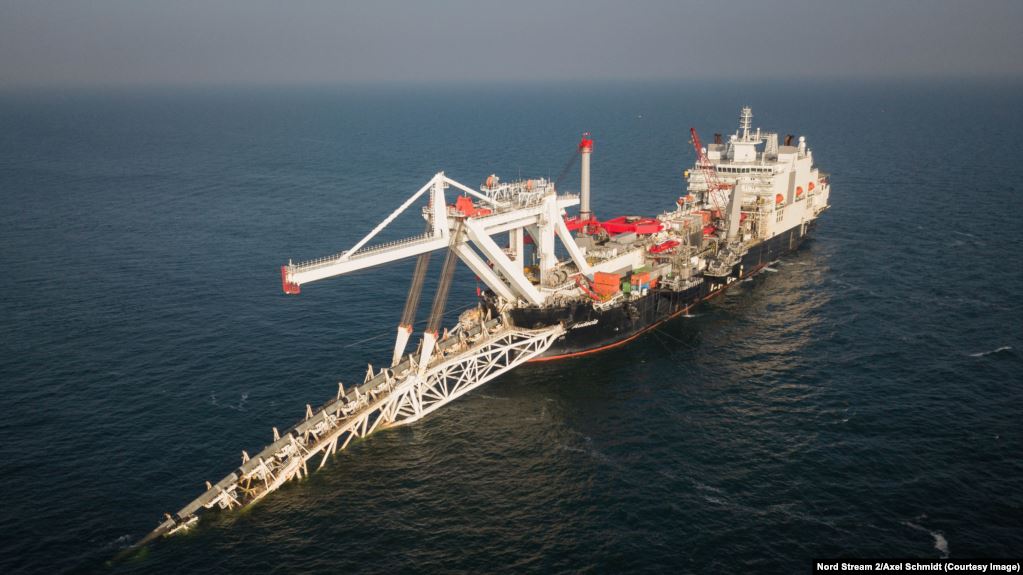 “Actually, these are already not restrictions at all: this is a direct and unequivocal declaration of economic war against the entire European subcontinent.”

​The reaction to the announcement in the Russian media was immediate. The newspaper Nezavisimaya Gazeta said that the bill provides for the toughest, Iranian-style sanctions against Nord Stream 2, the natural gas pipeline that runs from Russia to northern Germany under the Baltic Sea.

Kremlin’s spokesperson Dmitry Peskov said on May 21 that U.S. sanctions on Russia’s Nord Stream 2 pipeline to Germany would be an act of unfair competition that would be unacceptable for Moscow and for many European Union countries.

“Actually, these are already not restrictions at all: this is a direct and unequivocal declaration of economic war against the entire European subcontinent,” Lekukh stated.

In fact, under the Countering America’s Adversaries Through Sanctions Act of 2018 (CAATSA), the U.S. Department of Treasury could have imposed wide-ranging sanctions against all European companies working with Russia’s Gazprom to build Nord Stream 2 and TurkStream, the natural gas pipeline that runs from Russia to Turkey across the Black Sea. The law allows the U.S. president, in coordination with U.S. allies, to authorize sanctions on companies investing in Russian export pipelines or selling, leasing, or providing goods, services, technology and information for the construction of such pipelines.

The main reason sanctions have not been imposed so far under CAATSA is the U.S. administration’s effort to convince Germany that Nord Stream 2 would harm European energy security. Washington has been reluctant to alienate Berlin and the German business community, which supports the pipeline. However, diplomacy has failed, and U.S. Secretary of State Mike Pompeo admitted to the Congress in April that his department had done all it can to dissuade the Germans from building the pipeline, but without success.

​The new Senate bill, if it becomes a law, would be easier and faster to implement compared to the more complex CAATSA: it is a simple and clear piece of legislation outlining targeted sanctions against a few critical contractors. It would affect the handful of companies in the world that have the know-how to operate pipeline-laying vessels.

The bill envisions concrete and decisive steps to prevent or halt the construction of Russian energy export pipelines laid at depths of 100 feet or more below sea level. If adopted soon, it could make the completion of Nord Stream 2 impossible, as the sanctions would threaten the few companies that have the technology for deep-water pipe laying. Russia has not developed such technology yet and, for now, must resort to hiring Western contractors for such projects.

The sanctions would affect owners, corporate officers and principal shareholders of companies that possess or provide such vessels. The measures against these persons include visa denial and exclusion from the United States as well as blocking and prohibiting transactions in all their property and interests in property.

The bill targets not only the pipe-laying vessels working on projects such as Nord Stream 2 under the Baltic Sea and TurkStream under the Black Sea, but also “foreign persons that have sold, leased, provided, or facilitated the provision of those vessels for the construction of such pipelines.”

This means that the vessels’ lenders, insurers, import-export banks that assist them or any entity that has facilitated their involvement in Russian pipeline projects could be targeted for U.S. sanctions.

If enacted, the bill will be called ‘‘Protecting Europe’s Energy Security Act of 2019.’’

While the bill includes very tough targeted sanctions, it does not provide a blanket measure against all Nord Stream 2 contractors. Therefore, the claim that it will amount to an economic war against “the entire European subcontinent” is false.

Furthermore, while Germany and a handful of other European countries support the Russian pipeline, twenty EU member states have repeatedly expressed opposition to the project, fearing that it would derail the energy security principles adopted in 2009. The Russian pipeline through the Baltic Sea does not diversify sources of gas, but simply reroutes Russian gas from the Ukrainian transit route to Nord Stream 2.

Benjamin Schmitt, a former U.S. State Department European energy security advisor, told Polygraph.info: “Let’s be clear: Nord Stream 2 is not just a commercial deal. It is a project specifically aimed at hurting the economic and strategic security of Ukraine, while serving as a conduit to spread Russian malign influence across the West. In this context, Nord Stream 2 presents a multi-vector national security challenge for the Transatlantic community.”

For this reason, he said, both the Obama and Trump administrations have strongly opposed the implementation of the pipeline since its announcement in 2015. That position also enjoyed broad bipartisan basis from lawmakers on Capitol Hill during that same period. “Washington’s voice closely mirrors the wide majority of nations on both sides of the Atlantic that have expressed opposition or concerns with Nord Stream 2 over the past four years,” said Schmitt.

In his RIA Novosti op-ed, Dmitry Lekukh further claimed “most experts think” that the bill “will not gain support in the Congress” because “the price is too high.” However, the U.S. Congress already adopted in 2018 the CAATSA law that could sanction Russian export pipelines, as well as a House of Representatives resolution on “Expressing opposition to the completion of Nord Stream II, and for other purposes.”

Most recently, on April 3, the Senate Foreign Relations Committee passed a resolution (S. Res. 27) calling for the Nord Stream 2 pipeline project to be canceled. The resolution urged the Trump administration to take steps to counter Russian aggression in Ukraine, including targeting Nord Stream 2.

Moreover, there are pending legislative initiatives from the 115th and 116th Congress that clearly express the opposition of both Republicans and Democrats to the Nord Stream 2 pipeline project. These include 12 bills and two resolutions, apart from the latest Cruz-Shaheen legislation.Few foreign policy issues in recent history have seen such bipartisan unity in the U.S. Congress.

List of Adopted and Introduced Legislation in the U.S. Congress Regarding North Stream 2

Lekukh further claimed that Allseas, the Swiss company that lays pipeline under the Baltic Sea for the Nord Stream 2 project, has already completed a project in the Gulf of Mexico and has no plans to undertake another project in the U.S.

However, Allseas has an office in Houston, Texas, and therefore uses American insurers and banking services that will be affected should the bill become a law.

The second contractor laying deep-sea pipelines for Nord Stream 2 is the Italian oil services company Saipem, controlled by Italian state lender CDP and oil major Eni. Pressed by a sluggish demand after a period of low oil prices, Saipem has been trying to attract U.S. partners for joint ventures. If sanctioned, however, such prospects would become unattainable.

​In addition, many Russian commentators do not realize how ubiquitous the U.S. financial system actually is. This makes it difficult for a sanctioned foreign company to wire funds anywhere in the world, since such transfers generally go through intermediary banks in New York. Sanctions have a similar impact on securing loans, obtaining project financing and getting insurance globally.

“The United States Senate is going to pass a bill, the House is going to approve it, and it’s going to go to the President and he’s going to sign it, that is going to put sanctions on Nord Stream 2,” U.S. Energy Secretary Rick Perry said during his visit to Kyiv, Ukraine on May 21.