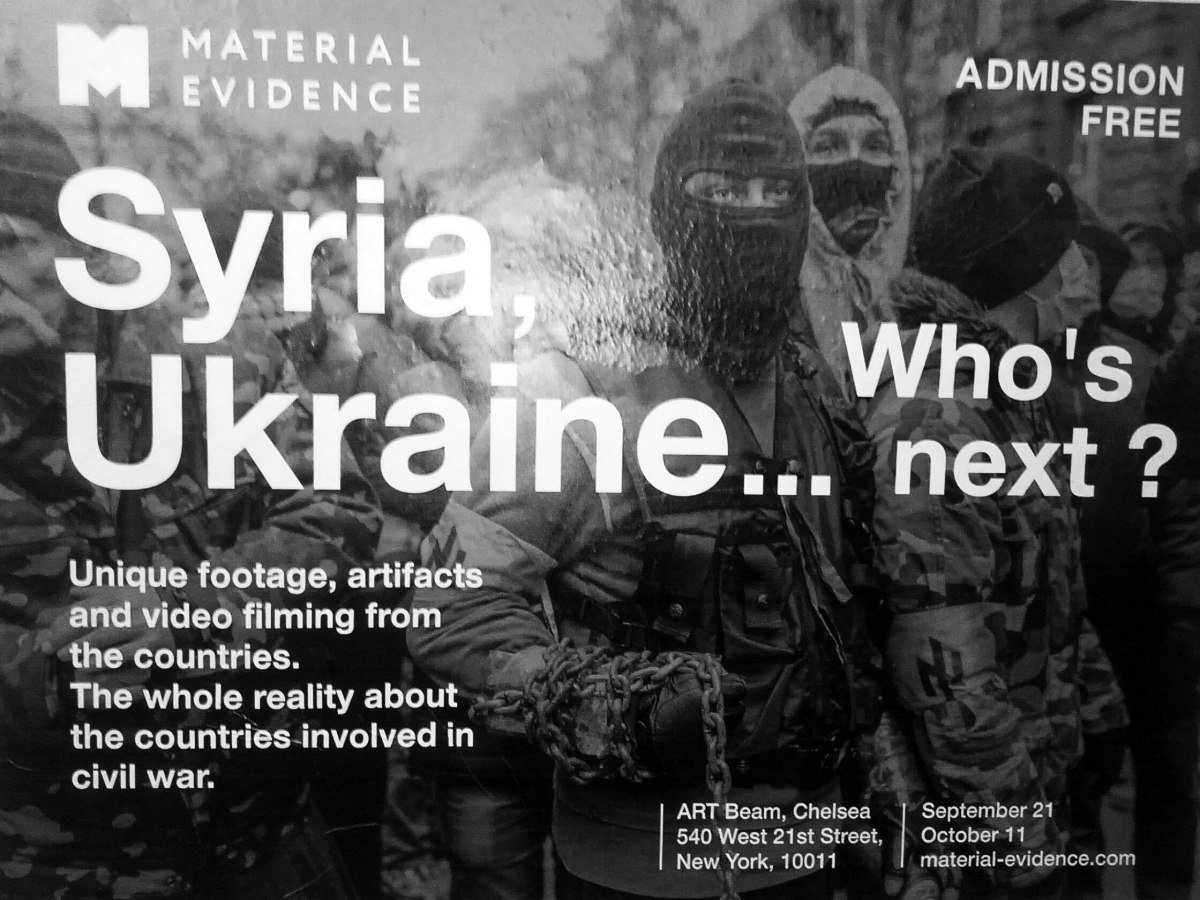 Two weeks ago a number of buses and subways engaged in an advertising blitz for an art exhibit opening in New York City titled “Material Evidence.” The gallery claimed to tour the reality of the conflicts in Syria and Ukraine. Recently, this exhibit was allegedly vandalized and its curator attacked – so let’s get to the bottom of this.

What is “Material Evidence”?

Material Evidence is a photojournalism art gallery documenting various aspects of the conflicts in Syria and Ukraine, claiming to give “the whole reality about the countries involved in civil war” and posing the question: “who’s next?”

Prior to arriving in New York, the exhibit toured in Berlin and was promoted by Russian network RT, where organizers lashed out against the perils of democracy:

“In the last decades the international community has been observing, once again, a distortion of what is considered the ‘rules of democracy’, which are constantly broken by political dictatorships,” organizers of the exposition say. Democracy, they argue, should result in minimizing conflicts and confrontations. Instead, the drive for democracy is tainted in blood.

The messages on their official site do little to help viewers understand more. Below is an excerpt (errors preserved, emphasis added):

The evens of the last months in Ukraine have almost led to the dissolution of Ukraine as a sovereign country.
Bloody collisions on the «Maidan Independence Square» in Kiev resulted in an upsurge of nationalists-banderovtsy groups on the ground who where the main force behind the overthrow of the last president. This uprising could not be ignored by the Eastern parts of Ukraine, which are mostly populated with Russian-speaking people. The residents of the eastern and southern regions of Ukraine strongly oppose «benserovtsy» and «Westerner Oligarchs» who had come to power. Accordingly the Autonomous Republic of Crimea held a referendum on the separation from the Ukraine and its reunification with Russia.

Much less than the advertised ‘whole reality’, this message clearly tows strongly typical Russian propaganda and/or trolling rhetoric seen online: The debunked fiction of far-right nationalists taking over Kyiv, the east ‘opposing‘ the revolution, ‘Western(er)’ conspiracies, and pretending the widely condemned occupation of Crimea has a semblance of legitimacy. Simple enough.

Who is behind this?

While the curator of the NYC gallery states that the Material Evidence event was “backed by crowdfunding and private fundraising efforts,” RT’s coverage admits that Material Evidence is organized by Zhurnalistskaya Pravda (Journalistic Truth, JT), a Moscow-based newspaper with a heavy anti-Ukrainian slant (a recent article mockingly asks readers how many Kharkiv residents will survive until the spring).

Journalistic Truth is also advertising a number of cash prizes for journalism via the Material Evidence site totaling over $93,000. In other words, they are not on a shoestring ‘crowdsourced’ budget.

The current JT page is devoid of any information on the publication’s founders, but WHOIS info and a cache of the page from January shows it is owned by Fregat Publishing LLC. So, who runs the paper? Its Editor-in-Chief is Vladislav Shurigin, and Deputy Editor is Denis Tukmakov – both of whom work for Russia’s extremist / ultra-nationalist-communist newspaper Zavtra. In the case of Shurigin, he is also a member of the National-Bolshevik party (a Nazi-Communist hybrid), and a member of the notorious Izborsky Club, a group which advocates forming a “Eurasian Empire.”

Shurigin promotes his involvement in the Material Evidence on his blog and is referred to as its Project Manager in the Russian media.

For those unaware, Zavtra and his club are run by Alexander Prokhanov, a notorious anti-Semitic conspiracist who is now a regular at Russian government events. On October 3 the website Hyperallergic ran a report that the gallery had been sacked by three vandals, and Material Evidence’s curator, Benjamin Hiller, had been pepper sprayed. The article doesn’t state that the individuals were Ukrainians, but does say that “Pamphlets containing anti-Putin and neo-Nazi slogans were also distributed throughout the Ukraine-focused section.”

The story itself raises many questions. For one, the lead photo that was vandalized (as seen in the article and to the right) was actually one denouncing Russia, with a swastika emblazoned over top the Russian flag. This causes one to wonder why (presumably) pro-Ukrainian neo-Nazis would deface a swastika and an anti-Russian symbol.

Second, the victim, Hiller, alleges that two of the vandals approached him and asked if he spoke Russian – why? Were they Russian speaking New Yorkers themselves? Hiller’s account becomes less credible when his statement on crowdfunding and fundraising is taken into consideration.

Third, the “pamphlets.” In the photo provided by Hiller below neither has neo-Nazi slogans nor anti-Putin anything. These are also not pamphlets, but an assortment of graphics printed on standard 8×11 printer paper, possibly at random.

The graphic on the left does indeed contain neo-Nazi and neo-Pagan symbology, including the Wolfsangl used by the Azov Battalion, and a Nazi Totenkopf – below reads “freedom or death.” However, the print-out on the right commemorates the ‘Heavenly Hundred‘ who were killed in Kyiv, showing them with angel wings. An unusual combination.

Was the attack staged? When factoring in the the shady financial backers, vandalism of an anti-Russian photo exhibit, and unrelated printed pictures reported as neo-Nazi propaganda, there certainly leaves much to be questioned.

Is there any evidence that this group is shadier than the extremist backers already named? Well, let’s take a look.

Okay, who else is involved in this?

Weeks ago, when ads for the gallery first started blasting New Yorkers, celebrity singer-activist Ruslana published a blog pointing out that the gallery’s site, Material-Evidence.com, was registered to Svetlana Zaharova – a famous ballerina who is also a Russian MP and member of Putin’s ruling party, United Russia. Although we cannot verify that the Svetlana Zaharova who is the listed owner of the website is the same Svetlana Zaharova who is a member of the Russian Presidential Council for Culture and Art, we felt this needed a bit more digging.

Doing just a quick search found that Ms. Zaharova is the administrative contact for a number of Russian websites, many of which are ostensibly anti-American. All of these blogs appear to be part of a content-farming, propaganda network, each consisting of hundreds of original (poorly written) articles with little traffic or comments.

For instance we have minoborony.com (“Ministry of Defense”), where America is the “No. 1 Terrorist.” The site claims to be owned and copyrighted by the Russian Federation’s Ministry of Defense, but is clearly a fan site.

GoodbyeUSA.com follows the same rhetoric, and RonovoRossia.com is your typical Russian nationalist blog.

But it’s Trueman-lab.com that is the most shocking, dealing mostly in anti-American propaganda with racist anti-Mexican cartoons and articles thrown in the mix (as in this piece: “But I can hardly respect those who never worked or even planned to, by whom I mean about 40% of immigrants”). This is the only site of the network which is in English, however, it’s clear the content was not made by a native English-speaker, made obvious by the Russian-language use of «brackets» instead of quotation marks. One particularly cringeworthy video (with a computer generated voice over poorly written text) even alludes that the U.S. infected the Congo with Ebola as a biological weapon.

Finally, if we look up the registrant’s email address, it ends up there are a number of unfinished websites in the works, including: Anti-Liberal.com, AntiLiberalism.com, and TerraUSA.net.

The exhibit is already being exposed to students, with a group from the John Jay College of Criminal Justice visiting on October 1. Given the connections of the exhibit’s owners, their other anti-American projects, and those involved in their funding, should this be in New York?