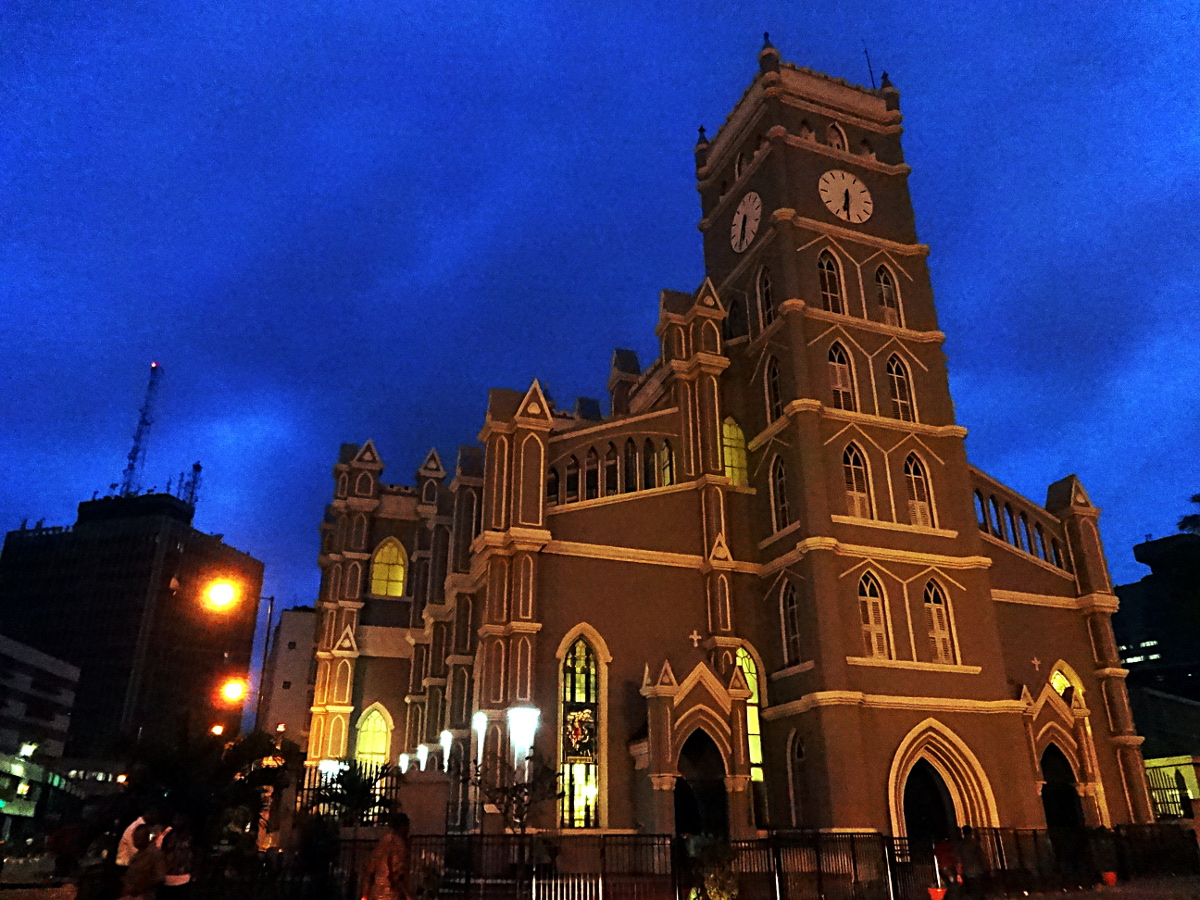 Check out Global Voices’ special coverage of the global impact of COVID-19.

When it comes to spurious information and the coronavirus, it has been an open season with some Nigerian evangelical pastors. As purveyors of disinformation, several pastors have pushed back against government lockdowns that would impact church closures. 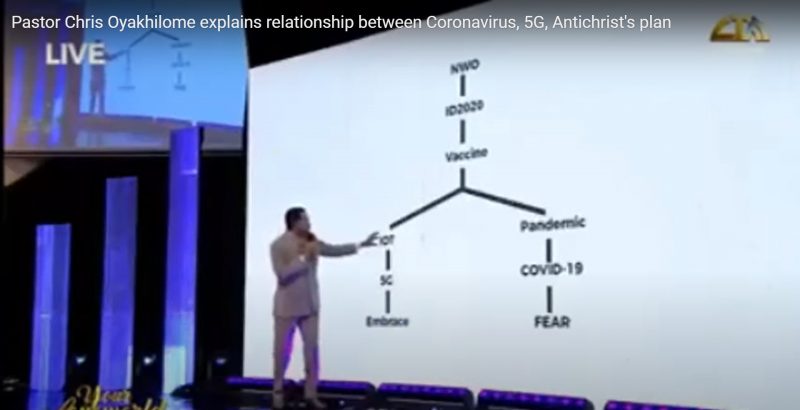 Screenshot of a YouTube video of Pastor Chris Oyakhilome.

Pastor Chris Oyakhilome of LoveWorld Incorporated (also known as Christ Embassy), in Lagos, Nigeria,​ has made some wild comments since the pandemic began in the country.

The flamboyant prosperity pastor preaches from the prosperity theology or gospel — a belief held by some evangelical Christians that financial blessings are manifestations of God’s purpose for them. Oyakhilome is worth $30–50 million United States dollars and his church has about 13 million members within and outside Nigeria.

On April 8, Oyakhilome delivered a sermon with over 12,000 views on YouTube in which he claimed that the introduction of 5G technology was responsible for the outbreak of the coronavirus pandemic. He also alleged that the administration of a COVID-19 vaccine will be used as a ruse to enthrone a “new world order” led by the anti-Christ.

Ashimolowo dismissed the claims as “conspiracy theories that had nothing to do with the anti-Christ,” reports the Premium Times, Nigeria’s online newspaper. “It has always been the nature of Christian leaders to plant fear in their members” in the face of “major world occurrence,” Ashimolowo said.

Adeyemi, the senior pastor of the Daystar Christian Centre, noted that the 1918 Spanish flu pandemic also adversely affected Nigeria, and resulted in the shutting down of churches, mosques, schools and markets.

A week later, Oyakhilome backtracked, claiming that he was only opposed to the “health risks” of the 5G network.

The public health implication of peddling these conspiracy theories has great ramifications. Already, the Nigerian senate has started an investigation on the status of 5G and its potential health impact on citizens.

Sadly, like most of the 5G-related COVID-19 theories, there is simply “no hierarchy of plausibility,” writes journalist Amy Davidson Sorkin of the New Yorker. Coronavirus is a virus transmitted from human to human through droplets like saliva.

Radio waves used in 5G are non-ionizing radiation, which, according to the United States Environmental Protection Agency has “enough energy to move atoms and cause them to vibrate,” but does not have the amount of energy “to remove the electrons from the atoms.”

Consequently, the 5G radio waves are incapable of generating enough energy to heat up the human body or weaken the immune system. “The idea that 5G lowers your immune system doesn’t stand up to scrutiny,” Simon Clarke, associate professor in cellular microbiology at the University of Reading, told the BBC.

Apparently, the coronavirus, 5G and anti-Christ conspiracy did not discourage Oyakhilome from amplifying more disinformation.

In the video above, Oyakhilome described wearing face masks to mitigate the spread of COVID-19 as “embracing to science.” At the beginning of the outbreak, he reminded followers that the World Health Organization (WHO) and the Center for Disease Control (CDC) said that “masks will not work.” He believes that “Wearing [masks] is politics, it’s okay. But no one should lie to us [that] it’s science… In fact, scientifically, it’s dangerous to health. This is the truth.”

At first, there was confusion about the advantages of wearing face masks in public. However, that period was short-lived.

Several leading scientists including Camilla Rothe and associates from the University Hospital LMU Munich, Germany and Lirong Zou and others from Guangdong Provincial Center for Disease Control and Prevention, Guangzhou, China, all recommend the wearing of masks or face cloths to limit the spread of the virus.

Based on this scientific evidence, on April 13, the CDC recommended wearing masks or “cloth face coverings in public settings where other social distancing measures are difficult to maintain (e.g., grocery stores and pharmacies), — especially in areas of significant community-based transmission” [emphasis by the CDC].

Similarly in Nigeria, the NCDC encouraged the wearing of cloth masks “as an additional layer” of prevention against the transmission of coronavirus.

Oyakhilome omitted all of this advice from his narrative.

In addition, he contradicts himself by asserting that, “If [mask wearing] is science, then it’s open to debate.” A rather irresponsible inference — as though scientific evidence are mere opinions and therefore debatable.

Not entirely surprising — his unsubstantiated claims are nothing new.

In 2004, the Nigerian Broadcasting Corporation banned the airing of “unverified” miracles on national networks. Two years later, Oyakhilome reframed the ban as “a plot by the Almighty God and his angels” who blocked his efforts to get his miracles verified.

Push back on church lockdowns

The Nigerian government issued stay-at-home orders for 14 days in two key states, Lagos and Ogun, and in Abuja, the capital, on March 30 — which was later extended to April 13, for an additional two weeks. In addition, there was also a restriction on large religious and social gatherings in Nigeria.

On May 4, President Buhari announced a relaxation of lockdowns in Lagos, Ogun and Abuja. However, places of worship remain closed.

On April 30, Oyakhilome kicked against the continual lockdown because the church is “a place of healing:”

So, those of you who love to run around government officials to get your validation, come and get COVID-19 compliant registration for your church. That is the last day Jesus will be in that church. But that is coming.

However, Oyakhilome is not alone. David Oyedepo, presiding bishop of Living Faith Worldwide, also questioned why markets were opened while churches have remained closed.

In the video, Oyedepo described how the continued lockdown on churches is a demonic attack: “I can smell a rat. The forces of darkness are influencing people at various levels because the growth of the church is the greatest headache of the devil,” he said.

Oyedepo’s Winners Chapel has branches in over 300 cities in the country. The church’s headquarters in Otta, Ogun State, southwest Nigeria, hosts a 50,000-seat auditorium, reputed to be one of the largest church auditoriums in the world.

Reputed to be one of Nigeria’s wealthiest pastors, Oyedepo is the founder of he faith-based Convent University.

It is significant to note that not all economic activities have been restored.

Also, the claim that the lockdown is targeted at churches is not exactly true. Social gatherings and schools — which equally attract a lot of people — remain suspended.

Meanwhile, many Christians in Nigeria have been able to fulfill their spiritual needs through online services. It is only reasonable — rather than exposing people to unnecessary risk.

It seems these pastors need this wise counsel from their colleague, Ignatius Kaigama, Catholic Archbishop of Abuja, who emphasised that pastors should lead their flock to heaven “whether coronavirus is active or not.”

Elsewhere, church leaders have expressed Christian love for the most vulnerable and dying in different ways. For example, the Catholic Church donated 425 hospitals and a Lagos-based evangelical church donated its auditorium to the government to be used as isolation centers.

This is more worthy of emulation than peddling conspiracy theories, disinformation and confusion during a global health crisis.