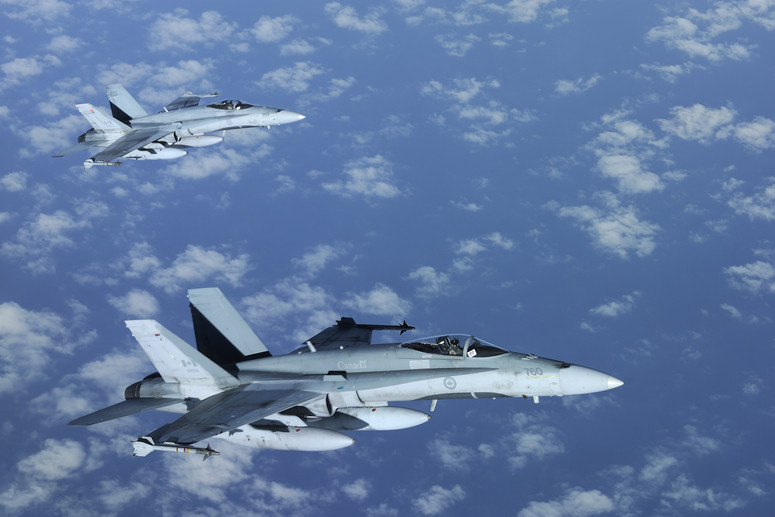 The Russian invasion of Ukraine on February 24 spurred calls for an internationally-enforced no-fly zone over Ukraine.

A no-fly zone, or an air-exclusion zone, means a full or partial demilitarization of the air space over a given country, preventing any non-authorized flights from either of the warring parties. This could include jet fighters, drones, or helicopters. A third party is required to enforce the rules of the no-fly zone by forcing out or shooting down the trespassers.

A country declaring a no-fly zone should do so in cooperation with an international organization, like the United Nations or NATO. It also requires specific rules of engagement, determining who is allowed into the air space or how the zone is enforced. Human lives should always be considered, including rescue teams for shot down pilots.

Several articles in the UN Charter can serve as a basis for establishing a no-fly zone, such as Chapter VII, Articles 39 and 42. The Security Council can identify a “threat to the peace, breach of the peace, or act of aggression” and authorizes the use of force to restore the peace.

The second option is Article 51, which gives every country the right to defend itself from aggression. Given the Russian position in the Security Council, this would be the more viable option for Ukraine.

This method has long been used to prevent civilian casualties. Its earliest examples were two no-fly zones over Iraq in 1991 to stop Saddam Hussein from bombing Kurdish and Shi’a minorities. Though enforced by the US Air Force, the legal basis was the UNSC Resolution 688.

The more recent case was during the 2011 Libyan Civil War, where the NATO-enforced no-fly zone helped to turn the tide of the conflict against Gaddafi’s forces.

It is no accident that the majority of the no-fly zone cases has been enforced by NATO air forces. Their large and highly advanced fleet of combat aircraft can overwhelm any potential adversary, and their combined forces can outgun even the Russian Air Force.

The most common goal for no-fly zones is the protection of civilian targets from aerial bombardments, like schools, hospitals or residential areas.

It can also help to level the playing field for the ground troops, especially if one of the sides has a significantly superior air force.

Turkey has full control over Bosporus and Dardanelles based on the 1936 Montreux Convention and can close them in times of war. This would limit the strategic options of the Black Sea Fleet and prevent it from receiving reinforcements.

A Russian Warship in the Dardanelles Strait. Source

Ankara has avoided making such a decisive move in the past, preferring to play the role of a mediator between Moscow and Kyiv. President Erdogan has denounced the renewed aggression but did not support sanctioning Russia.

The military lend-lease deal has also been named as a potential form of international support.

This system has its origins in the Second World War. In 1940, the United States saw Britain’s war effort as vital for its own security, but war-weary London could not afford all the supplies it needed.

US Congress passed the Lend-Lease Act in March 1941, which authorised the President to provide any foreign aid necessary to strengthen the US security, asking for compensation “in kind or property, or any other direct or indirect benefit which the President deems satisfactory,” or simply after the conflict was won.

This method provides carte blanche for any material support but does not require direct military intervention.