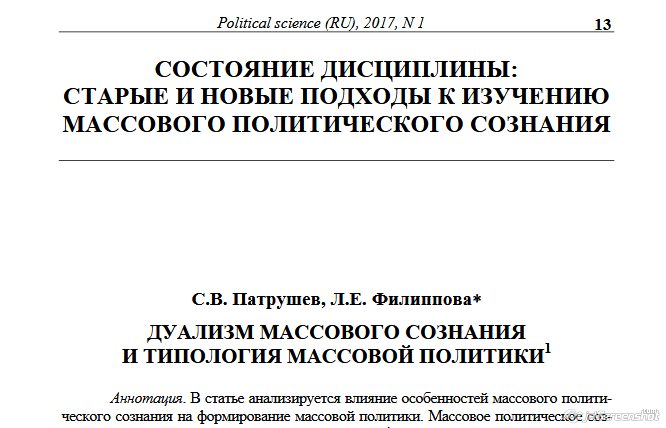 The depoliticization of the Russian population via the revival of archaic values provides the regime with a reserve of unquestioning support, a new study says; but at the same time, it means that “the political elites are not capable of developing a stable agreement on the main questions of the development of Russian society.”

Sociologists Sergey Patrushev and Lyudmila Filippova say that “alienation from politics and from the authorities was and remains a key characteristic of Russian mass consciousness” (“Dualism in Mass Consciousness and a Typology of Mass Politics” (in Russian), Politicheskaya nauka, 1917, available online. It is summarized here.)

Drawing on the research of many scholars, they suggest that Russian attitudes toward the state and authority have deep roots in the tsarist and Soviet pasts and have changed far less than the attitudes toward politics which exist in many other countries, something that has limited the ability of Russia to modernize.

Among the features of this underlying Russian culture, the two sociologists say, are massive suspiciousness toward everything new and unique, an inability to understand the behavior of others apart from a hierarchy, a readiness to conform to any order, a limited understanding of alternatives, a view that deception is an appropriate behavior, a lack of confidence in oneself, a sense of incompleteness, a nostalgia for mythologized pasts, and hostility to any rules imposed by anyone except the immediate collective.

“These social habits and social mechanisms of the organization of life are extraordinarily stabile and important,” Paturshev and Filippova say, “and they have been preserved to the present day” where they continue to define the attitudes of the people and the powers toward one another.

What further complicated this situation, they argue, is the division between elites and masses in tsarist and Soviet times, and the divisions within the elites especially in tsarist times between those who celebrated these values, the Slavophiles, and those who opposed them, the Westernizers.

Borrowing of technologies and social ideals from the West, however, “in a paradoxical way were changed by a social system with deeply rooted stereotypes of archaic thought and behavior.” That combination produced as a result “the unique double think of Russian civilization” especially since 1917.

Western European cultures were able to avoid this because they developed on the basis of contracts in which the rights of both the individual and the state were recognized and kept in balance. “In Russia on the other hand, civil society wasn’t formed and the main principle of social organization was ‘collectivism,’” which dissolved the powers and rights of the one into the other rather than allowing both to exist.

That is “the main distinction between Western European and Russian social nature,” the two say. “The contract principle of the self-organization of the society sharply contrast with the collective. If the first of these guarantees the right of the individual to ‘freedom to be special and independent’ … the second principle sanctions his right to right only via service to the society where ‘each happily gives himself to the whole.’”

This popular “alienation from politics” as understood elsewhere “leads to an institutional trap,” Patrushev and Filippova say. On the one hand, because so few Russians feel responsible for what occurs at the political level, they behave in an apathetic and inert way that provides the basis for a kind of stability of the political order.

Indeed, they suggests, “the authorities are interested in maintaining the dualism of political consciousness by means of combining in political discourse traditionalist and modernizing elements.” But there is another side to this approach which works against the authorities.

It means that the rulers increasingly are dependent “on apparat and group interests, ambitions and intrigues” and that “the political elites aren’t capable of developing a stable agreement on the main questions of development,” the sociologists say. But because the population keeps apart from politics, the ruler often cannot easily mobilize it against these elites, leaving everyone in “an institutional trap.”