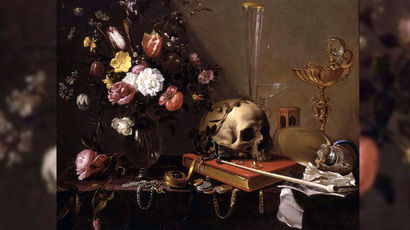 The Russian authorities have long promoted the idea that whatever is is forever as “an effective means of convincing people that the powers that be are always right” and that it is impossible and even dangerous to try to change anything, according to Gazeta journalist Semyon Novoprudsky.

In an essay published today, the journalist says that he calls this “the syndrome of ‘imaginary eternity’” and sees evidence of this all the time. When the US introduced sanctions or Russian introduced counter-sanctions, the Kremlin described all of these things as “’forever’” even when it should have been obvious that they had a beginning, a middle and an end (gazeta.ru/comments/column/novoprudsky/10815265.shtml).

And that propagandistic argument has created an atmosphere for statements equally untrue, Novoprudsky says, that “’relations of Russia and the West were NEVER good’” and that “’in Russia there will NEVER be reforms of changes for the better.’” But the idea is not new: in Soviet times, the regime claimed the republics would always be together.

In fact, the Gazeta journalist points out, this “’forever’” lasted less than 69 years, about the length of a single human life time. And none of its leaders from first to last managed that even though their spokespeople insisted that each of them was forever and irreplaceable as well.

Despite the regime’s claims, “nothing is eternal under the moon, and therefore ‘nevers” and ‘forevers’ do not exist in politics. The borders of states and even the states themselves are not eternal. Nor are the longest-ruling leaders eternal” however much they seek to convince their populations otherwise.

“The syndrome of ‘imaginary eternity’ in general is entirely understandable,” he continues. “Its parents are the brevity of an individual human life and the fear of (sometimes on the contrary the desire for) change.” But understanding where it comes from does not make it any less dangerous even if it often is unnoticed, Novoprudsky says.

That is because it is “a powerful weapon of manipulation” for the elites who use it to control their populations. “Its main message is that ‘the future is impossible.’ Everything will always be as it is now. There is only a great past and the only correct present that directly follows it. And if you try to change something, things will only be worse.”

But where people try or not, “changes all the same are inevitable.” And as a result, “the syndrome of ‘imaginary eternity’ is the main enemy of normal development” because it suggests that people should not try to act but rather accept the system others have imposed and the future such as it is that these others project.

With the help of this syndrome, he continues, “the authorities are really trying to stop time, to paralyze the will of the nation to changes and development. ‘Sanctions are forever.’ ‘They will always hate us.’ ‘The West is the eternal enemy.’” – all these are attempts to stop time where it is now rather than be open to change or even to the possibility of working for change.

“In reality,” Novoprudsky says, “today was never exactly like yesterday and tomorrow will not be exactly like today. Ideas, the environment, and people all change. Denying that may help some people to live, to cope with what they do not believe they can change or should try to change.

The future will be different, but here is “one additional important detail,” the journalist concludes, “no one says that other times will necessarily be better.”