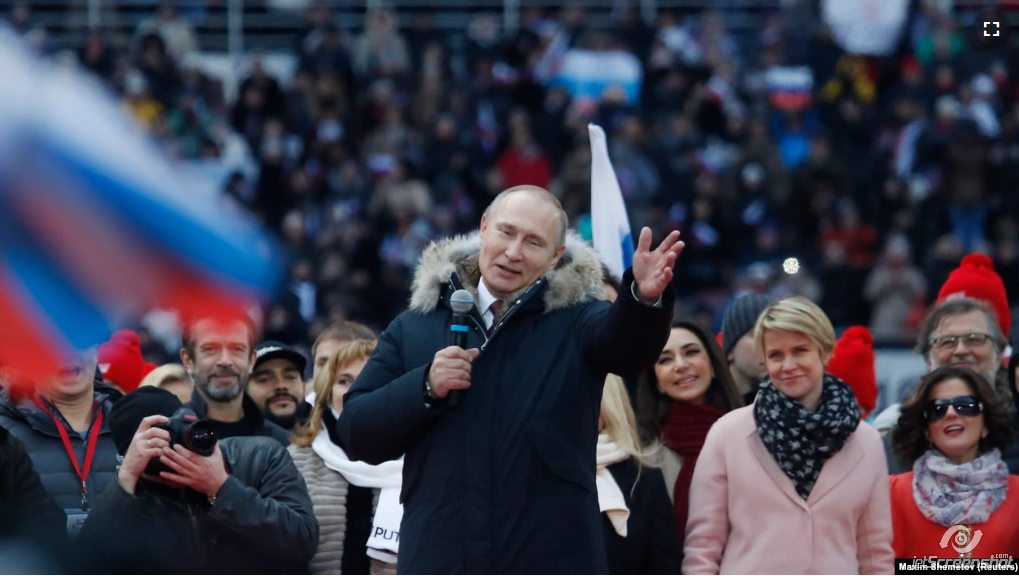 While continuing its armed assault on the battlefields of Donbas, the Kremlin is boosting its attacks against Ukraine on the information front as well. Russian propaganda’s continuing dehumanization of Ukraine and the West, which backs the Ukrainian defense efforts, is being used to justify increasingly radical methods in the Kremlin’s so-called “special military operation.”

Perhaps the most serious event last week was a briefing by Russia’s Ministry of Defense, during which top officials said that the United States was preparing provocations in order to “accuse Russia of using chemical, biological or tactical nuclear weapons in Ukraine.” According to the Ministry, “sabotage is possible at chemical and biological facilities in Kharkiv and Kyiv or at the Zaporizhzhia nuclear power plant,” and will be accompanied by tens of thousands of civilian casualties (Mil.ru, April 23).

Knowing the Russian authorities’ modus operandi of blaming others for what they plan to do themselves, such baldly articulated allegations raised the level of concern among many observers, especially given that Ukrainian experts have previously noted the real likelihood that Russia will use nuclear or chemical weapons in Ukraine (see EDM, April 6). Weeks later, the US Central Intelligence Agency (CIA) chief, William Burns, expressed the same concerns (BBC—Russian service, April 15).

Another round of escalation came with the release of a Federal Security Service (FSB) report about a supposed foiled plot to assassinate the main Russian propagandist Vladimir Solovyov, purportedly planned by “Ukrainian neo-Nazis on the instructions of the SSU [Security Service of Ukraine]” (Lenta.ru, April 25). That same day, Russian President Vladimir Putin personally mentioned the “attempted assassination,” saying that he “knew by name the curators from the CIA” who “advise Kyiv on the assassination plot against Russian journalists” (TASS, April 25).

Some former intelligence officers from the post-Soviet space, including Azerbaijani KGB veteran Akif Gasanov, have noted the “unimaginable level of professional degradation” of the Russian special services. In particular, his Facebook post points out blatantly and poorly fabricated evidence pinned on the ostensible would-be assassins: “Molotov cocktails” in plastic bottles and an inscription on a book allegedly belonging to one of the detainees that absurdly ends with the words “Illegible Signature.” According to Gasanov, this could have happened only if the Russian operative tasked with manufacturing the “evidence” took his orders too literally (Facebook.com/akifggasanov, April 25).

Nevertheless, the trend of Russia intensifying the confrontation is quite clear. Internally, Russian propaganda remains bewilderingly contradictory. At the start of the year, alongside themes about “a peaceful Russia that is not planning to invade Ukraine,” Kremlin propagandists openly discussed the need to seize other countries and the possibility of destroying the West with nuclear weapons (see EDM, January 21). Now the rhetoric of “being forced into a special operation” (RIA Novosti, February 24) and claims that “America has drawn Russia into this war,” thus destroying the current world order (Sputnik.UZ, April 23), are promoted in tandem with the opposite statement that the destruction of the “Anglo-Saxon world order” is “Russia’s historic mission” (YouTube, March 1). Kremlin propagandists explicitly claim they are not at war with Ukraine (Yandex.zen, April 19) but with the North Atlantic Treaty Organization (NATO). Yet at the same time, they contend that “almost the entire Ukrainian people are infected with Nazism” who, therefore, must undergo a total de-Ukrainization and a complete reformatting of their national identity (RIA Novosti, April 3).

However, such contradictions do not cause dissonance in the minds of Russians. According to sociologists, human beings have a strong psychological need to avoid terrible truths (VoA—Russian service, April 6). And so people pick and choose from the many explanations offered them by propaganda the ones they feel are most suitable to them personally, safely forgetting about the others.

Meanwhile, even pro-Kremlin sociologists admit that most Russians, although remaining loyal to the government, do so mainly for reasons of conformism and are not ready to be actively involved in the “patriotic” agenda (T.me/russica2, April 25). Accordingly, theses about “being forced into a war” and “being left with no choice” are more appropriate for these people. Their main motivation is not patriotic frenzy or militant rhetoric but the fear of an external threat. “Messianic” vocabulary, in turn, is intended for a narrower, “passionate” part of the audience. Recently, however, this rhetoric has become sharply radicalized, and its audience is broadening.

In particular, one notorious Russian ideologue, “Eurasianist” Alexander Dugin, compared Ukrainian President Volodymir Zelenskyy to the Antichrist and declared that Russia would not back down from Ukraine, because it was “needed by Christ” (T.me/russica2, April 17). Incidentally, on the eve of Orthodox Easter, Russia launched rocket attacks on Odesa, killing several people, including a young mother and her three-month-old daughter. Yet Russia’s propagandists not only blamed Kyiv for the tragedy but also used it to further justify the war, saying that otherwise Ukraine would “continue to kill” (Stopfake.org, April 23).

Dugin is not particularly well known to broader Russian society, but as some researchers note, he appears to have certain ties to representatives of the country’s military, political and economic elite (Detali.co.il, March 20). Dugin was close to Leonid Reshetnikov, the former head of the Russian Institute for Strategic Studies (RISI) under the Presidential Administration (formerly under the Foreign Intelligence Service or SVR), and prepared joint reports with him. So in that role, Dugin would have had a more or less direct influence on the Kremlin’s foreign policy (Katehon.com, February 9, 2016).

And significantly, since the beginning of the 2022 Russo-Ukrainian war, Dugin’s texts have been widely disseminated on popular Telegram channels, which have been found to be directly supervised by the Presidential Administration (Proekt.media, November 28, 2018). The same Telegram channels also began to publish texts about a supposed powerful “Jewish cult-mafia” and a “Jewish-Masonic” World Government, which provoked the war to “expand their living space at the expense of Ukraine and Russia” (Tlgrm.ru, April 23). Previously, such opuses only appeared on marginal ultranationalist portals.

At the same time, the aggressive rhetoric against internal opponents of the war and celebrities who left Russia because of the conflict is intensifying. Propagandists claim that the liberal media and activists are open enemies of Russia, trying to dismember and destroy it with Western money (AiF.ru, April 22). This narrative is constantly present in the Russian mainstream, along with Moscow’s own detailed plans for the dismemberment and destruction of Ukraine (RIA Novosti, April 23). More than likely, as Russian society grows tired and the current mobilization potential is depleted, the degree of hysteria and escalation will only increase.